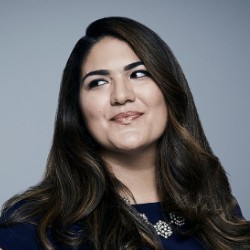 It could have been another day of mourning.

Instead, one year after the Democratic presidential nominee Hillary Clinton lost the election, Democrats celebrated on Tuesday – in large part because of the women voters who helped propel their nominees into office and the record number of female candidates who themselves were elected.

In Virginia, Democrat Ralph Northam won the governor’s race, a feat that wouldn’t have been accomplished without women.

Related Article Republicans know Tuesday's elections had a message. They just don't know what it was.

Another of the biggest forces in the Virginia races was Planned Parenthood, which helped Democrats defeat a Republican lieutenant governor nominee, Jill Vogel, who as a state senator had pushed a bill requiring women seeking abortions to undergo vaginal ultrasounds.

Elsewhere in the state, a handful of first-time female candidates made history in races for the House of Delegates. Kathy Tran is one of the first Asian-American women to win a seat in Virginia. Danica Roem, once she takes office, will be the first openly transgender candidate ever to be elected and serve in a state legislature in the country.

Tran said she was inspired to run after President Donald Trump was elected, realizing “the moment to stand up is now.”

“I realized i couldn’t sit on the sidelines,” she told CNN in a phone interview. “I never thought I would run for office. It was something not in my wildest dreams – partly because nobody ever looked like me that was elected to office. I think what we saw on Tuesday is that people are hungry for their government to reflect the diversity of their communities. … I’m just really honored to break that barrier and to show that we can run, and we can win, and we can be a strong voice for our communities.”

“I think these delegate races are where the change happens,” she told CNN before Tuesday’s election. “The field of delegate candidates that I’m knocking on doors for make me so proud to be engaged in a political process at a time when you turn on the news, there’s not a whole lot that inspires pride. These are good people who care deeply, who despite all the demands are choosing to invest now because they love their country and their neighbors. Those are the kinds of voices that we’ll need.”

The Center for American Women and Politics, a unit of the Eagleton Institute of Politics at Rutgers University-New Brunswick, said in a release that this week’s election entailed “a number of landmarks for women.”

Across the country, Michelle Kaufusi became the first woman elected mayor in the 157-year history of Provo, the third-largest city in Utah; New Jersey elected Sheila Oliver to be the nation’s first black Democratic woman to serve as a lieutenant governor; and Jenny Durkan became the first lesbian mayor in Seattle’s history, as well as the city’s first woman mayor since the 1920s.

Such wins sparked excitement – and optimism among liberals – for 2018.

Some credit the organizers of last January’s Women’s March, who tweeted images and celebratory messages this week from the Women’s March official account for each of the wins, as one of the main reasons why women were such a powerful force on Tuesday.

“Repeat after us: TOGETHER, WE ARE UNSTOPPABLE,” the account tweeted, using the hashtag “#2018WeGotYou.”

We're just getting started. This is only the beginning. Stay focused.

“I think the Women’s March momentum did two things that were really important,” Jennifer Lawless, co-author of the book, “Women on the Run: Gender, Media, and Political Campaigns in a Polarized Era,” told CNN in a phone interview Wednesday. “It generated this widespread activism to push back against Donald Trump’s agenda. And it made women who ordinarily wouldn’t participate in politics, or do much more than vote during a general election, become politically activated. We’ve seen a heightened level of activism that translated into Democratic victories last night. And … some of those women who were activated threw their hats in the ring to run.”

’Standing up and standing together’

The march also helped elevate grass-roots organizations whose sole purpose has been to help women run for office. Emerge America, founded in 2002 to train women to run for office, said 85 of the organization’s 129 women on ballots in nine states Tuesday won their races for local and state office. In Virginia, of the 15 seats that flipped from red to blue, nine were won by Emerge alumnae.

“Is it any surprise that women are so energized both running for office and coming out to vote? I don’t think so,” Andrea Dew Steele, founder and president of Emerge America, told CNN. “I think this is really a repudiation of Donald Trump and everything he stands for. … I don’t think that should be a shock to anybody. Women are really still feeling it; they are still pissed off.”

Emily’s List president Stephanie Schriock said that 20,000 women across the nation contacted the organization after the 2016 election expressing an interest in some level of activism, whether that meant running for their local city councils or Congress. This is up 2,000% from the 920 women who contacted the nonprofit after the previous year’s election cycle.

Related Article Winners and losers from the 2017 election

“We’ve never seen (these numbers) at Emily’s List,” Schriock said in an interview with CNN. “I can’t even find the words to explain how inspirational and shocking this is. We’ve spent 30 years sitting at women’s kitchen tables saying, ‘You should run.’ “

Following the night of victories, the National Organization for Women issued a release with a headline that seemed to sum up the sentiment of many: “Women Win on Election Night 2017.”

“It is just wonderful to have these victories,” NOW President Toni Van Pelt told CNN in a phone interview. “It’s a warning to everybody in the country that women are standing up and they are standing together.”

CNN’s Ryan Struyk and Eric Bradner contributed to this report