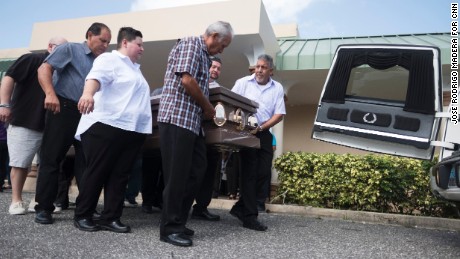 Isabel Rivera González, 80, was buried on October 20 in Arecibo, Puerto Rico. Her family believes the death was hurricane-related. The government did not assess the death, CNN has learned.

Arecibo, Puerto Rico (CNN)You won't hear about her death from officials investigating the aftermath of Hurricane Maria, but you should know her name and her story.

She was Isabel Rivera González.
Rivera was 80. She loved to dance, and was known in this hilly enclave of Puerto Rico for her Saturday-night merengue moves. In family photos displayed at her funeral last week, she was shown laughing near a shoreline as flamingos tiptoed behind her. In a black-and-white image, she beamed as she held an infant, one of her five children. Those children described their mother as healthy and full of energy late into her years -- a woman who lit up a room.
Isabel Rivera
Rivera survived Hurricane Maria on September 20 huddled next to her boyfriend, Demencio Olmeda, 76. The storm's winds tore out their curtains and windows, swirling debris in the sky, knocking out power and water service and killing, officially, 51 people.
"I will remember her every day," Olmeda told me.
Read More
On October 15, three weeks after the storm, Rivera died awaiting a procedure at a hospital that had lost power in the hurricane and whose backup generator failed, according to several of her family members. Such deaths -- those of people who might be alive if not for the storm -- should be analyzed as part of the US territory's efforts to tally hurricane mortality, said Héctor Pesquera, secretary of Puerto Rico's Department of Public Safety, which oversees the count.
Rivera died on October 15 at Manatí Medical Center.
Yet Rivera's death was not assessed or counted in connection with Hurricane Maria's death toll, CNN learned after interviewing Puerto Rican and federal officials, as well as funeral home directors and hospital administrators in Rivera's municipality, Arecibo, located about an hour west of San Juan, the capital.
The official hurricane death toll for Arecibo stands at one -- a landslide fatality that was autopsied at the Bureau of Forensic Sciences in San Juan, according to government documents. Rivera did not die in a landslide and her body was not sent to San Juan for an autopsy, according to family members and Roberto Jiménez, her funeral home director.
"I view her death as a direct result of what happened" because of the hurricane, said Christina Camacho, one of Isabel Rivera's grandchildren, who lives in Philadelphia.
The hospital where she died disputes that claim.
Rivera's story -- and that of her municipality -- is the start of a CNN examination of uncounted deaths following Hurricane Maria in Puerto Rico. If you know someone who died during the hurricane or its aftermath and may have been uncounted by the government, please consider filling out our online form in the story below. You also can message CNN on WhatsApp at +1-347-322-0415. We aim to investigate some of your stories as a way to determine whether deaths are being undercounted.

'The numbers just don't add up'

All hurricane-related deaths in Puerto Rico must be reviewed by the Bureau of Forensic Sciences, according to Pesquera. Interviews with funeral home directors, however, suggest some bodies of people who may have died of causes related to the storm never make it.
To get a sense of how many deaths may have been uncounted by the government, I decided to conduct an informal experiment: Between October 19 and 21, I visited all five operational funeral homes in Arecibo, which is one of Puerto Rico's 78 municipalities, home to about 88,000 of the territory's 3.4 million people. Two additional funeral homes were closed.
I met Rivera's family on this search, along with Jiménez, the funeral home director.
Jiménez, who operates the Cristo Rey funeral home in Arecibo, told me he'd recorded 39 deaths since Hurricane Maria, up about 15 from the same timeframe in previous years.
Some of that increase may come from the fact that two funeral homes in the area are closed, he said. But he suspects four or five of the deaths were hurricane-related.
In total, Arecibo funeral home directors counted 114 deaths in the month since the storm. About 25 seemed likely related to Hurricane Maria, they said, based on their conversations with relatives. Roughly 20 of those bodies were sent to San Juan for forensic analysis, they said.
One of the largest hospitals in Arecibo, Hospital Pavia, declined to comment for this story. On October 5, hospital officials told NPR that 49 bodies had been taken there since the storm, likely including some from neighboring municipalities. José J. Martínez, who owns Funeraria San Luis, down the street, told me he visited the hospital shortly after the storm. Bodies were piled on top of one another in the morgue, which was clearly beyond capacity, he said.
"The vast majority of the bodies were decomposed," he said. "It was a horrendous smell."
José S. Rosado, executive director of Manatí Medical Center, where Rivera died, told me that no deaths from that hospital had been sent to San Juan for forensic analysis. Only blunt trauma, drownings, falls, crime scene victims and bodies that are found dead on arrival should be sent to the capital for analysis, he said. That conflicts with instructions Pesquera told me were distributed to all hospitals in Puerto Rico, which he said included indirect causes of death.
"They were all natural causes of death," Rosado said.
Separately, 112 people are reported missing in Puerto Rico since the hurricane, as of October 18, said José Rosario, the police sergeant handling missing persons reports.
It's unclear if and whether some of those people will be listed as having died in the hurricane, said Pesquera. There's no deadline on that process, he said, and families, funeral homes or hospitals could dispute how a death has been classified even after the person is buried.
As of October 21, the Bureau of Forensic Sciences had analyzed more than 750 bodies, Pesquera told me. Of those, 51 deaths have been found to be hurricane-related, including two more recent deaths connected to waterborne illness, which the government confirmed this week.
Evelyn Cruz Rivera, one of Isabel Rivera's five children, stands at her mother's coffin.
Sixty-three bodies were backlogged and awaiting autopsy in San Juan, he said.
It is improbable the official hurricane death toll is high enough, said Martínez, the funeral home owner. His funeral home processed 12 bodies in the month after the storm, he said.
"I suspect most of them were probably from the hurricane," Martínez told me. He cited an example of a woman who died of an apparent heart attack while waiting in line for fuel.
"The numbers just don't add up."

'We took her home all right'

Some particulars of Rivera's death are in dispute.
Manatí Medical Center confirmed the power outage to me but said a pre-existing heart condition led to Rivera's death, not the outage. "She was too unstable to undergo that procedure" to remove fluid from her lungs, said Dr. Luis Rosa, the center's medical director.
The hospital also had the ability to perform the procedure with a small emergency generator but elected not to because she had not responded to other treatments, Rosa said. Additionally, Rivera had been to the hospital before the storm with heart-related issues, he said.
Olmeda, Rivera's boyfriend, meanwhile, told me the procedure was postponed because of the power outage. Relatives said the hospital downplayed the seriousness of the situation. Several of them told me she was in relatively good health before the hurricane hit.
"The doctor kept saying by Monday she could go home," said Miguel Cruz, Rivera's son.
"We took her home all right."