Justin Timberlake and Janet Jackson have both survived ‘Nipplegate’

Some want Timberlake to apologize

Both he and Jackson have had successful careers since 'Nipplegate'

The internet still wants Justin Timberlake to apologize to Janet Jackson for Nipplegate, but it looks like she’s doing just fine.

The announcement that Timberlake will perform in Super Bowl LII’s halftime show on February 4 in Minneapolis has reignited criticism that the “Cry Me A River” singer didn’t do right by Jackson after her “wardrobe malfunction” during their halftime Super Bowl XXXVIII performance in 2004.

Related: Justin Timberlake to perform at his first Super Bowl since ‘Nipplegate’

For those who need a refresher, Timberlake ripped off Jackson’s bodice and revealed her right breast while the two were performing his hit “Rock Your Body” at the end of the halftime show. The stunt occurred just as Timberlake sang the last line,”I’m gonna have you naked by the end of this song.”

Jackson said in a statement at the time that it was a “costume reveal” gone awry and issued an apology. Timberlake also apologized for the incident and said it was “not intentional and is regrettable.”

“Nipplegate” was born, with Jackson bearing the brunt of the criticism and fallout, which included a staggering $550,000 fine levied against CBS by the Federal Communication Commission.

The Supreme Court tossed out the fine in 2012.

Timberlake didn’t come out unscathed. He faced criticism from those who believe he has appropriated black culture with his music but didn’t do enough to defend Jackson during the media hailstorm that followed the Super Bowl incident.

Last year, Kendra James wrote an essay for Cosmopolitan magazine about a dust up over a Timberlake tweet in which the pop star said he was “#inspired” by a speech made by black actor Jesse Williams at the BET Awards.

James wrote that “Despite a career-long fascination with (and use of) black pop culture, Justin Timberlake has never done or said anything to prove he’s in any way connected to or concerned with black Americans — at least not black Americans who exist outside of the recording studio.”

“He did not defend Janet Jackson when she was unfairly dragged for the exposure of her breast at the Super Bowl in 2004 (even though it was he who exposed it),” she wrote. “He has not spoken out about Black Lives Matter.”

James’ piece renewed calls for Timberlake to apologize to Jackson over Nipplegate, a sentiment seen all over Twitter again on Sunday when news broke that he will appear on the Super Bowl stage for the second time, 14 years after his first performance.

Is it a twelve minute apology speech to Janet Jackson? https://t.co/vq5hEssUAn

It’s safe to say that both stars have bounced back personally and professionally from the fiasco.

While Jackson kept a low profile for a minute, including reportedly dropping out of playing the legendary Lena Horne in a TV project, albums “Damito Jo,” “20 Y.O.” and “Discipline” were well received in 2004, 2006 and 2008 respectively.

The singer emerged from the grief of losing her superstar brother Michael Jackson in 2009 to write about her struggles with body image in the 2011 book “True You: A Journey to Finding and Loving Yourself.” It shot to No. 1 on the New York Times bestsellers list.

Three years later, Jackson postponed the remainder of her “Unbreakable” tour, which was tied to her album by the same name, for another life changing moment: The singer said she and her husband were “planning a family.” Jackson announced later that year that she was pregnant with her first child at the age of 50.

Son Eissa Al Mana was born in January 2017 and Jackson and her husband split a few months later.

She is back on the road with her 56-city “State of the World” tour.

He launched a successful film career with small roles in the 2006 films “Alpha Dog” and “Black Snake Moan,” which led to bigger roles, like playing internet mogul Sean Parker in 2010’s “The Social Network.”

The singer followed that up with parts in films like the comedy “Friends With Benefits” opposite Mila Kunis in 2011 and “Runner Runner” starring Ben Affleck in 2013.

Timberlake married actress Jessica Biel in 2012 and the couple welcomed a son, Silas, in 2015.

On the small screen, Timberlake is one of “Saturday Night Live’s” most beloved host/performers. He is also well known for his appearances on buddy Jimmy Fallon’s late night NBC show.

Timberlake’s music, however, still brings him the most critical acclaim.

That same year, he received the VMA Vanguard Award at the MTV Video Music Awards and thrilled fans by reuniting with his former N’Sync group members to perform. 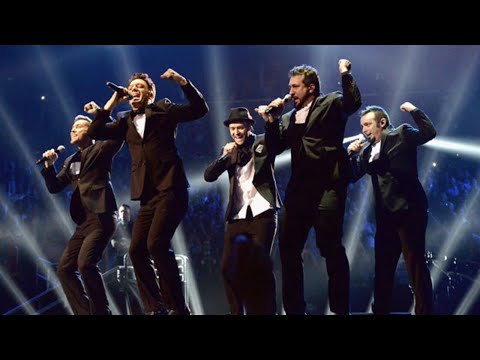 This year, Timberlake’s tune “Can’t Stop The Feeling!” from the animated film “Trolls” won a Grammy for best song written for visual media and was nominated for an Oscar.