Tokyo will likely get hit with severe winds and torrential rain

At least two people were killed and many injured as a mammoth typhoon struck Japan, hurling dangerous winds and threatening to cause major flooding and mudslides.

Typhoon Lan made landfall early Monday along Japan’s southern coast near Minamiizu. The storm is rapidly moving to the northeast at 59 kilometers per hour (37 mph), CNN meteorologist Matt Daniel said.

As of early Monday Lan was whipping sustained winds of 165 kilometers per hour (100 mph), which makes it a Category 2 storm, according to Daniel.

More than 200,000 people have been ordered to evacuate, according to the Fire and Disaster Management Agency, with a further 2.2 million homes under advisory to prepare for evacuation.

In Fukuoka, a city on the southern island prefecture of Kyushu, a 63-year-old man died when falling construction scaffolding struck him, police in the city told CNN.

Police in Osaka, in central Japan, said a woman was found dead in a flooded car in the city, though they could not be certain the incident was related to the typhoon.

Pedestrians struggle with the wind and rain in Tokyo on October 22, 2017.
KAZUHIRO NOGI/AFP/AFP/Getty Images

Although the typhoon is weakening, Tokyo is expected to get hit with possibly damaging winds and heavy rains, CNN meteorologist Haley Brink said.

Several parts of Japan have already recorded rainfall totals greater than 500 millimeters in the past 72 hours, Daniel said, citing the Japan Meteorological Agency. 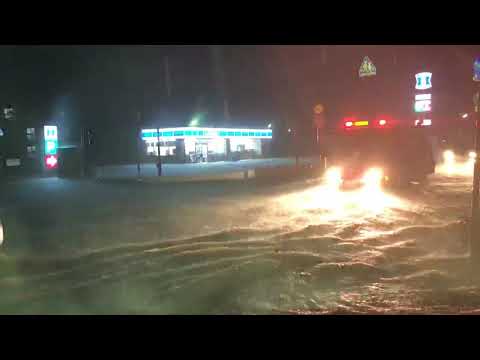 Shingu, a city in the Wakayama Prefecture southwest of Tokyo, recorded 894 millimeters of rain over the past 72 hours – their greatest rainfall total in such a period since the city received 425 millimeters in 2000.

The storm has already caused massive waves in South Korea.

Enormous waves crash onto the coast of Busan, South Korea, on Sunday. Fishing boats were forbidden from going out to sea.
Yonhap News/Newscom/ZUMAPRESS.com

Typhoon Lan is so enormous that its cloud field is larger than Japan, Brink said.

On Sunday, Japanese voters participated in a snap general election that was expected to make Shinzo Abe the longest-serving leader in the country’s post-war history.

The turnout Sunday was stymied by the typhoon, but a record number of Japanese citizens voted earlier ahead of the storm.