McGowan is at the center of the Weinstein scandal

No one in Hollywood should have been surprised when Rose McGowan appeared to publicly name Harvey Weinstein as her alleged rapist in a tweet on Thursday.

The actress has never been one to mince words.

She sent a series of tweets to Amazon head Jeff Bezos on Thursday, and in one of them, she dropped a major bombshell.

” @jeffbezos I told the head of your studio that HW raped me. Over & over I said it,” McGowan wrote. “He said it hadn’t been proven. I said I was the proof.”

A rep for McGowan told CNN she was not available for comment.

Last week Weinstein was accused of multiple instances of rape, sexual assault of women over a period of nearly three decades in exposés published by the New York Times and The New Yorker. Weinstein was fired from his company. The New Yorker reported three rape allegations – lodged by “former aspiring actress” Lucia Evans, Italian actress Asia Argento and one anonymous source.

McGowan is the fourth woman to level a rape accusation against Weinstein.

When reached for comment on Thursday, a spokeswoman for the disgraced movie mogul said, “Any allegations of non-consensual sex are unequivocally denied by Mr. Weinstein.”

McGowan has long waged a battle to bring attention to the treatment of women in her industry. But her recent social media posts about the Weinstein scandal have been personal and poignant.

In the process she’s emerged as one of the most powerful voices in the Weinstein sexual misconduct scandal and has inspired a Twitter movement.

It wasn’t the first time McGowan had talked about rape.

Using the hashtag “Why Women Don’t Report,” she tweeted in 2016 about being raped by a then unnamed studio head, saying, “It is time for some goddamned honesty in this world,”

“A (female) criminal attorney said because I’d done a sex scene in a film I would never win against the studio head,” McGowan tweeted. “Because it’s been an open secret in Hollywood/Media & they shamed me while adulating my rapist.”

While she is best known for her role on “Charmed,” which she starred in from 2001 to 2006, Hollywood also knows McGowan for being both unconventional and shooting straight from the hip.

Her forthcoming biography, “Brave,” is scheduled to be published in February. It tells the story of McGowan’s unorthodox upbringing.

“Rose was born in one cult and came of age in another, more visible cult: Hollywood,” the book’s description says. “Born and raised in the Italian chapter of the Children of God, she escaped through a cornfield at night, moved to the states, and ran away at thirteen.”

She emancipated herself from her parents at the age of 15 and got into acting.

Fans first came to know her as an ingénue who dated shock rocker Marilyn Manson and wore a see-through dress when accompanying him on the red carpet of the 1998 MTV Video Music Awards.

Since then, McGowan has become an accomplished actress, directed a film and grown into the woman who is called in her book description a “feminist whistleblowing bada**.”

‘Fired’ for speaking up

She tweeted in 2015 that she “got fired by my wussy acting agent because I spoke up about the bulls**t in Hollywood” after she publicly complained about a casting call for an Adam Sandler movie.

The casting call asked that she wear “black (or dark) form fitting tank that shows off cleavage (push up bras encouraged). And form fitting leggings or jeans.”

McGowan told Entertainment Weekly at the time that she wasn’t trying to be critical of Sandler, she just thought it was “dumb.”

“I was offended by the fact that went through so many people’s hands and nobody red flagged it,” she said. “This is normal to so many people. It was probably even a girl that had to type it up. It’s institutionally OK.”

McGowan even wades into the diciest of controversies.

She caught heat in 2015 for being critical of Caitlyn Jenner for saying, “the hardest part about being a woman is figuring out what to wear.”

“We are more than the stereotypes foisted upon us by people like you,” McGowan said at the time. “You’re a woman now? Well f**king learn that we have had a VERY different experience than your life of male privilege.”

The actress called it “laughable” when some accused her of being transphobic for going after Jenner.

“You are an active endorser of what is tantamount to harassment and abuse of actresses and women,” she wrote.”I speak as someone who was abused by Hollywood and by people like you in the media, but I’m a different breed, one they didn’t count on. I refuse and reject this bulls**t on behalf of those who feel they can’t speak.”

A few months later, McGowan used former “Charmed” costars Shannen Doherty’s revelation that she had been diagnosed with breast cancer to both share heartfelt words of support and eviscerate the industry that brought them together.

“The rules of Hollywood engagement brainwashed into us were truly vile,” McGowan wrote on an Instagram post addressed to Doherty. “The men & brainwashed women in our business made it so we couldn’t be friends, I regret that.”

They had been pitted against each other, McGowan said, and she was fearful of being labeled “difficult” as had Doherty.

“We were both cast in a fake real life role, that of the Bad Girl,” McGowan said. “I had to prove I wasn’t as bad as you or I’d get the axe, too. But we were never the bad ones, it was them., the Beige Brained White Dudes in Charge.”

Looking for the light

Women on Twitter have not only been supporting McGowan, but they are taking action.

After Twitter temporarily blocked her, they said for violating their rules by tweeting a private phone number, #WomanBoycottTwitter trended.

With all of her criticism, it would be easy to think that McGowan hates Hollywood, but she said in a 2015 interview with Broadly that she’s happy to be a part of the industry – on her terms.

Rose McGowan on Sexism in Hollywood & Life After Grindhouse 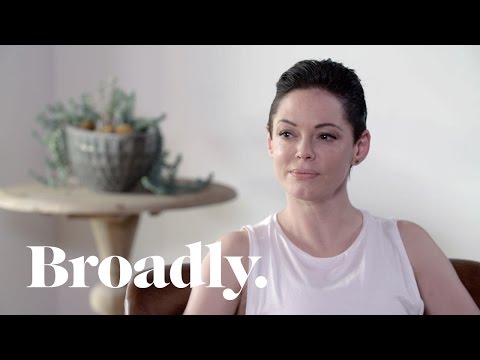 “And more than that, consciousness,” she added. “I just want people to shine a light for the next person that’s coming in the dark because I had nobody shining a light for me.”