By Charlotte Parsons, CNN
Published 9:45 AM EDT, Thu October 12, 2017
Ad Feedback
Artist concept of Haumea. The ring is darker than the planet's surface and roughly 2,300 kilometers from its center.
IAA-CSIC/UHU
CNN  —

Astronomers have made an unexpected discovery about Haumea, a mysterious dwarf planet on the edge of our solar system.

It has a ring around it.

Until now, such rings had only been found around the four giant, outer planets – Jupiter, Saturn, Uranus and Neptune.

“It is the first time a ring has been discovered around a trans-Neptunean object (an object further away from the sun than Neptune),” José Luis Ortiz, researcher at the Institute of Astrophysics of Andalusia (IAA-CSIC), whose study of Haumea was published in “Nature” on Wednesday, said in a press release.

“It shows that the presence of rings could be much more common than was previously thought, in our solar system as well as in other planetary systems.”

A ring around Haumea 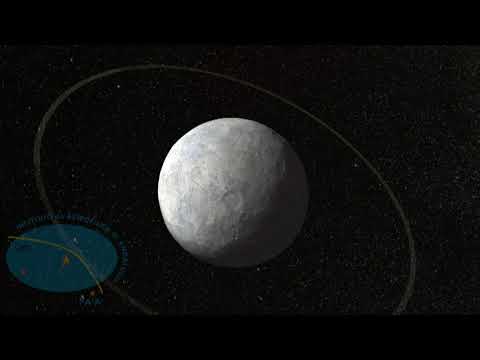 So how was the ring formed? Oritz says there is more than one possible answer to that question.

“It may have originated in a collision with another object, or in the dispersal of surface material due to the planet’s high rotational speed.”

The ring is not Haumea’s only distinctive feature. The dwarf planet also has an unusual shape – elongated, resembling a rugby ball.

Haumea has two moons, and is one of four dwarf planets located in the belt of ice and rocks beyond Neptune, more than 50 times farther from the sun than Earth.

Pluto, Eris, Makemake and Haumea are particularly hard to study because of their small size, low brightness, and enormous distance.

Of the four, Haumea had been the least well-known, so an international campaign was set up to find out more about it.

Astronomers used a complicated technique in which they watch an object pass in front of a star (like a small eclipse), allowing astronomers to find out physical characteristics like size, shape, and density.

“We predicted that Haumea would pass in front of a star on the 21st of January 2017,” Ortz said. “And twelve telescopes from ten different European observatories converged on the phenomenon.”