“Marshall” uses a single case to shed light on civil-rights titan Thurgood Marshall, yielding an enlightening if somewhat arbitrary snapshot of the Supreme Court Justice during his crusading days working for the NAACP. Anchored by topnotch performances by Chadwick Boseman in the title role and Josh Gad, it’s a 75-year-old story imbued with modern-day resonance.

Introduced in 1941, Marshall is crisscrossing the country handling cases, seeking elusive victories in the face of racial injustice. His travels bring him to Connecticut, where a wealthy socialite (Kate Hudson) has accused her African-American chauffeur, Joseph Spell (“This is Us’” Sterling K. Brown), of raping her.

Needing a local attorney as his co-counsel, Marshall enlists the reluctant Sam Friedman (Gad), a Jewish lawyer who specializes in civil suits and has no experience with criminal trials. Moreover, the judge (James Cromwell) bars Marshall from presenting the case, forcing Friedman to go up against the politically connected, blue-blood prosecutor (“Downton Abbey’s” Dan Stevens).

Director Reginald Hudlin doesn’t try to reinvent the wheel on what plays like a classic if somewhat small-boned story – indeed, an HBO movie slightly blown up for theatrical release. The grudging bond that Marshall and Friedman forge – after no shortage of bickering – bears a resemblance to “In the Heat of the Night,” a movie about mismatched cops released 50 years ago.

The film makes a few half-hearted detours into Marshall’s personal life, but frankly, those scenes don’t reveal much. Fortunately, Boseman – portraying another civil-rights icon, after Jackie Robinson in “42” – captures the key attributes of his personality in this limited context. His Marshall is driven, passionate and self-confident despite the long odds, what with the judge tipping the scales against him. 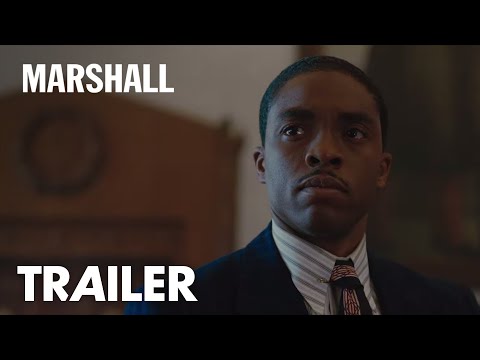 In that regard, there’s actually a bit more depth to Gad’s Friedman, an uneasy recruit to civil rights, despite the fact that he experiences his own prejudice as a Jew, while fretting about the fate of family in Europe. Friedman seeks to prioritize the client’s interests even if that means entertaining a guilty plea, while fearing that the NAACP – accustomed to fighting battles across the South – is so intent on scoring a “win” as to make that secondary.

Written by a Connecticut attorney who extensively researched the case, Michael Koskoff, along with his son Jacob, “Marshall” is at its core a legal drama. Smooth and authoritative in those scenes, the movie feels less sure-footed when venturing outside the courtroom.

Marshall was previously portrayed by Sidney Poitier in the 1991 miniseries “Separate But Equal,” which chronicled his Supreme Court victory in the landmark Brown v. Board of Education desegregation case.

“Marshall” documents a more intimate, less celebrated chapter in his storied career. Yet in terms of showcasing his influence and commitment to justice, the case that it presents is, in its own way, plenty compelling.