About 2,000 structures in the state are destroyed, according to fire authorities

New evacuations were ordered Tuesday evening as more than a dozen wildfires raged across Northern California, with the largest ones killing at least 17 people as they scorched the state’s famous wine country.

The largest of the deadly fires were burning in Sonoma, Napa and Mendocino counties, with flames ripping through the lush, picturesque landscape.

Officials in the city of Santa Rosa and Sonoma County called for the evacuations of five more areas Tuesday evening. Already, 20,000 people had been ordered to leave the area and other parts of Northern California.

It is too early to tell whether any of the wildfires were started by humans, said Ken Pimlott, director of Cal Fire. “All these fires are under investigation,” he told reporters, adding that his department was focusing on rescues and firefighting. But he said the chance the fires were caused by lightning was “fairly minimal.”

Here’s what we know so far, according to California authorities.

• Ten people have died and the number is expected to grow.

• Two of those who died were in Napa County, county spokeswoman Kristi Jourdan said. They were 100-year-old Charles Rippey and his wife, Sara, 98. They died when a fire engulfed their home near the Silverado Country Club north of Napa, Jourdan said.

• About 2,000 homes and businesses have been destroyed by the fires in Northern California, the California Department of Forestry and Fire Protection said Tuesday.

• More than 100 people were being treated at Napa- and Sonoma-area hospitals for fire-related injuries or health issues, including burns, smoke inhalation and shortness of breath.

• An estimated 1,500 structures have been destroyed and 57,000 acres burned in eight counties.

Before and after: Images of California devastation

• Most of the Northern California fires ignited Sunday night, driven by winds of more than 50 mph and dry conditions, Pimlott said Monday. The high winds led to “extreme rates of spread and volatile burning conditions,” according to Cal Fire. 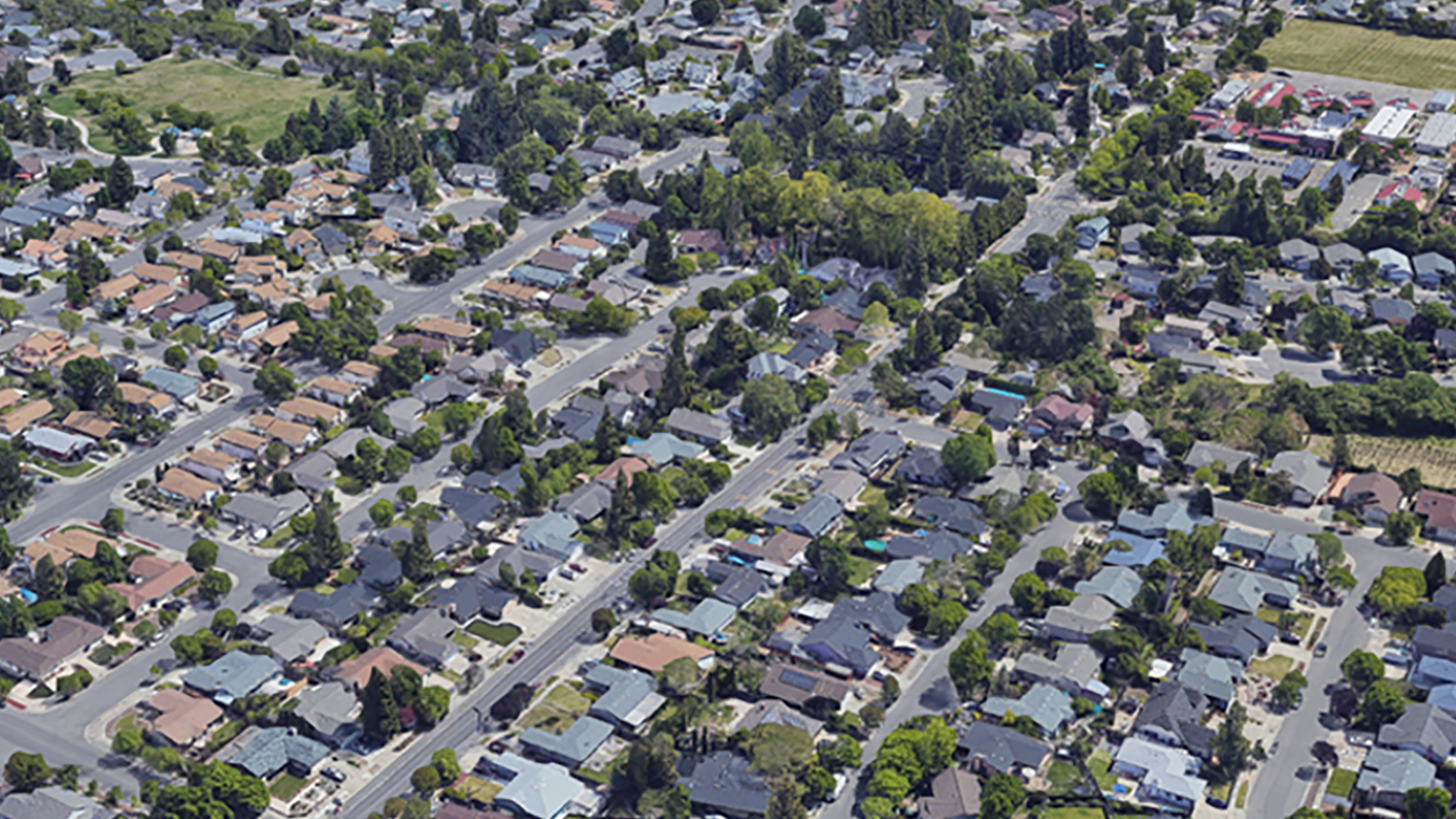 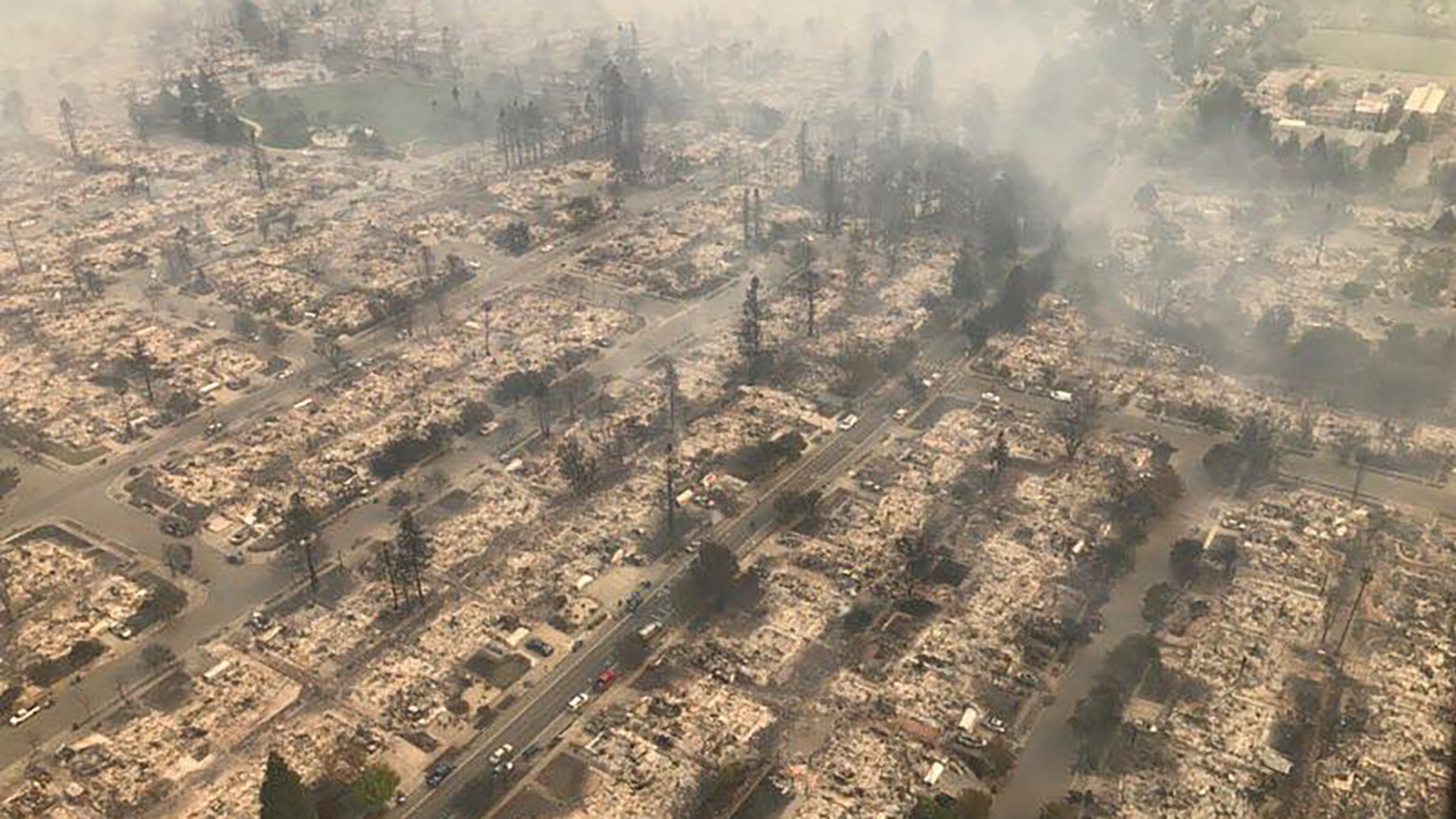 • More than 180 people are missing, but authorities think communications issues are making it impossible for many of those people to check in with family.

Margaret Curzon said her parents lost almost everything in the wildfire that destroyed their home and the Coffey Park neighborhood in Santa Rosa, a city of about 175,000 roughly 50 miles northwest of San Francisco.

Her mom woke up early Monday morning and smelled smoke, but thought it was the neighbor’s barbecue or chimney, so she went back to sleep. They woke up again because their bichon frise, Brady, was whimpering.

Her father looked outside and his first thought was that there was some sort of bomb, or an attack.

“It looked like we were at war,” Curzon said. “The sky was orange and there were embers falling from the sky.”

Curzon said her parents had five or 10 minutes to grab their two dogs and anything else they could and escape.

She said it took about a half-hour to get out of their neighborhood because cars were bumper to bumper.

“He could feel the car getting hotter and hotter because the fire kept creeping up and getting closer to them,” she said.

The only thing that remained at her house was a concrete statue of the Virgin Mary, Curzon said after visiting the home site later Monday.

Almost nothing is left of a home in Santa Rosa, California.
David McNew/Getty Images

The devastation was significant in Santa Rosa. Fire leveled subdivisions and reduced cars and homes into burnt piles of ash and rubble.

A large part of Santa Rosa was evacuated, including Kaiser Permanente Hospital and Sutter Hospital. Authorities imposed a sundown-to-sunrise curfew for the northern and eastern parts of the city under evacuation orders.

“We are asking people to stay indoors” because of smoke, Alonso said.

There is no rain in the forecast this week, according to the National Weather Service. Winds in the next two days will come out of the north at around 10 to 20 mph with higher gusts of 35 to 40 mph possible, CNN Meteorologist Michael Guy said.

The biggest blaze was the Tubbs fire, at 27,000 acres, stretching from Santa Rosa to the Calistoga area in Napa County.

That fire has destroyed at least 571 structures, Cal Fire said Tuesday, making it one of the top 15 most destructive fires in recorded California history.

The numbers that reveal the scope of the California wildfires

In Sonoma County, firefighters battled the Tubbs fire in Santa Rosa, the Nuns fire at 5,000 acres and another fire that spread across 2,000 acres.

In Mendocino County, the Redwood Complex fire had burned at least 21,000 acres, as of Tuesday.

The Atlas fire destroyed several homes near the Silverado Country Club north of Napa, CNN affiliate KPIX reported, including the house where the Rippeys died.

Also in that area, fire burned the main building of the Signorello Estate Winery to the ground. Broken and charred wine bottles remained on seared metal shelves, video from KPIX showed.

Parts of northern California have been ravaged by intense wildfires that have now consumed ~100,000 acres of land: https://t.co/lIcpfpN9Yb pic.twitter.com/mHOAOqJRKa

The city of Napa, with about 80,000 residents, was not under evacuation. But parts of it were under a boil-water notice Tuesday, because fires destroyed a pump station near the Silverado resort and rendered a water treatment plant inoperable, the city said. Many in Napa also lost power and cell service, according to the Napa police.

Alison Crowe, the winemaker for Garnet Vineyards & Picket Fence Vineyards in Napa Valley, estimated two-thirds to three-fourths of the grape harvest already had taken place but said some grapes still haven’t been picked. The 2017 harvest will be remembered for this fire, she said. 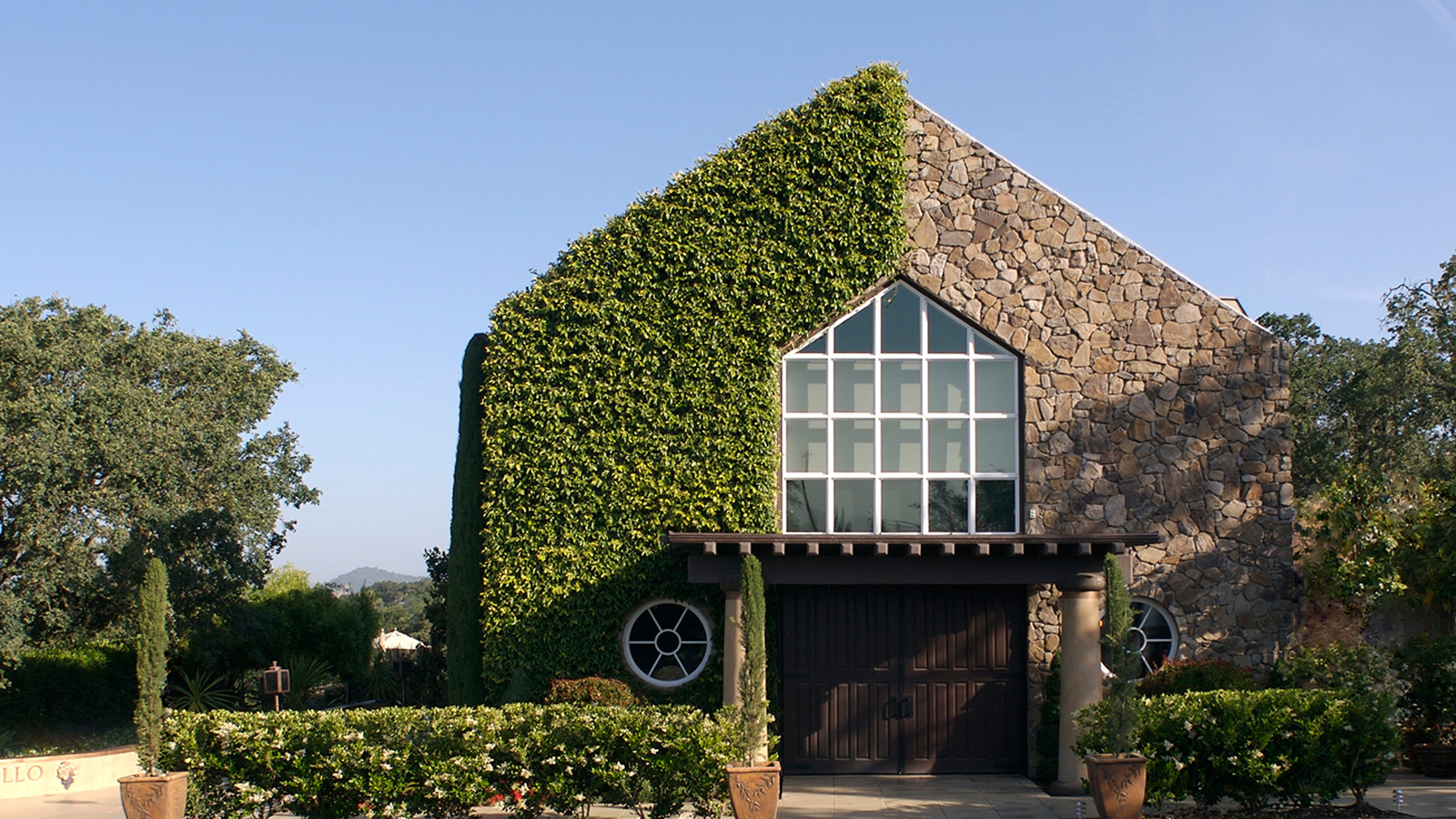 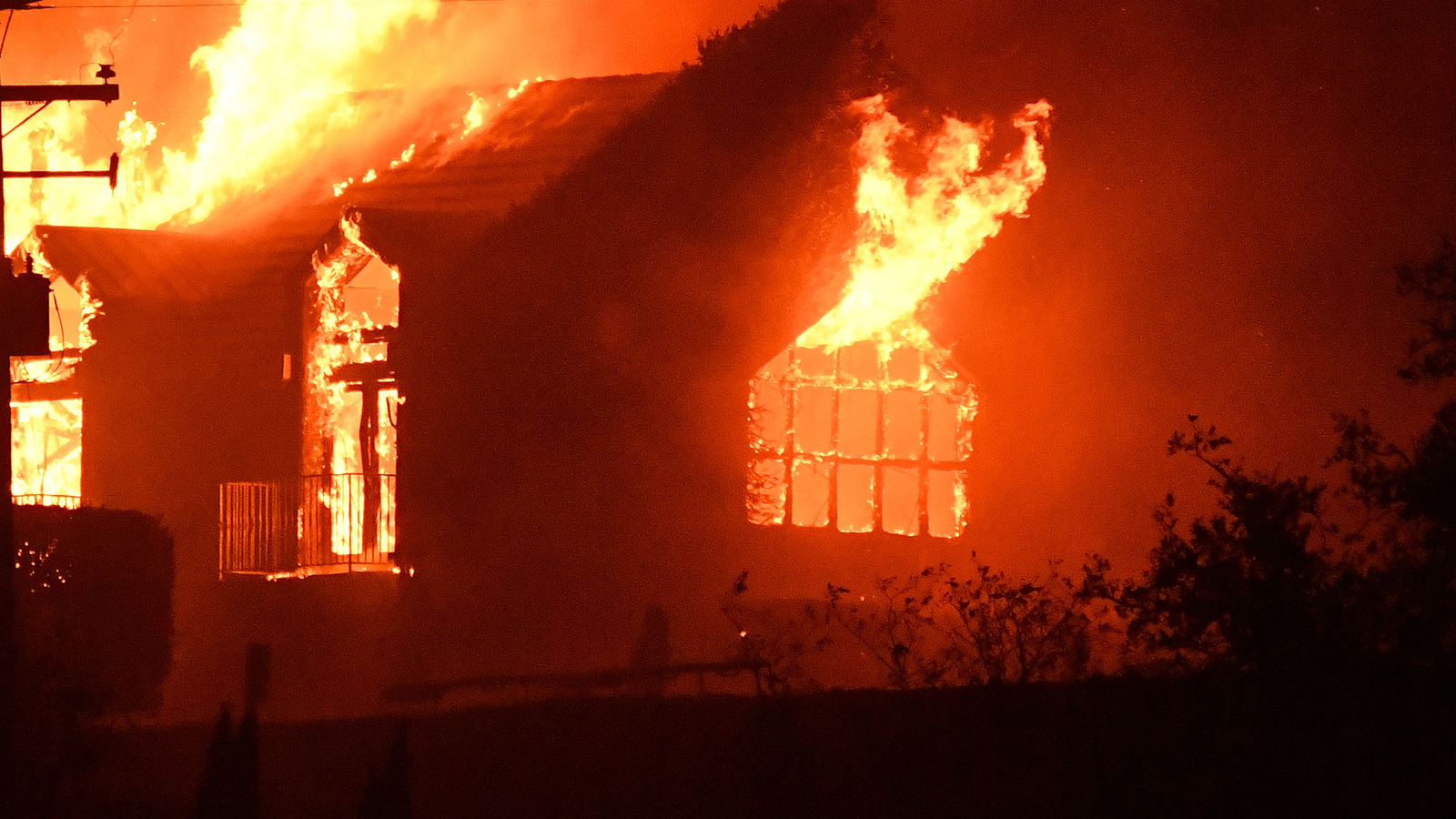 Napa and Sonoma counties have the most wineries in California. The economic impact from the wine industry was estimated at $13 billion for each county, according to 2012 and 2014 research done by Stonebridge Research Group.

Hospitals evacuated and many injured as wildfires ravage Northern California

“As of right now, with these conditions, we can’t get in front of this fire and do anything about the forward progress,” he said, adding that resources from across California were to begin arriving in the area later Monday.

Pictures from Disneyland in Anaheim on Tuesday afternoon showed the sky with an orange glow.

“The loss of homes and burning of precious land is heartbreaking but the loss of life is truly devastating,” press secretary Sarah Sanders said.

Trump vows US will ‘stand with’ Californians during wildfires