A further 213 million children and adolescents were overweight in 2016, finds a new study published Tuesday in the Lancet.

Looking at the broader picture, this equated to roughly 5.6% of girls and 7.8% of boys being obese last year.

Most countries within the Pacific Islands, including the Cook Islands and Nauru, had the highest rates globally, with more than 30% of their youth ages 5 to 19 estimated to be obese.

The United States and some countries in the Caribbean, such as Puerto Rico, as well as the Middle East, including Kuwait and Qatar, came next with levels of obesity above 20% for the same age group, according to the new data, visualized by the NCD Risk Factor Collaboration. 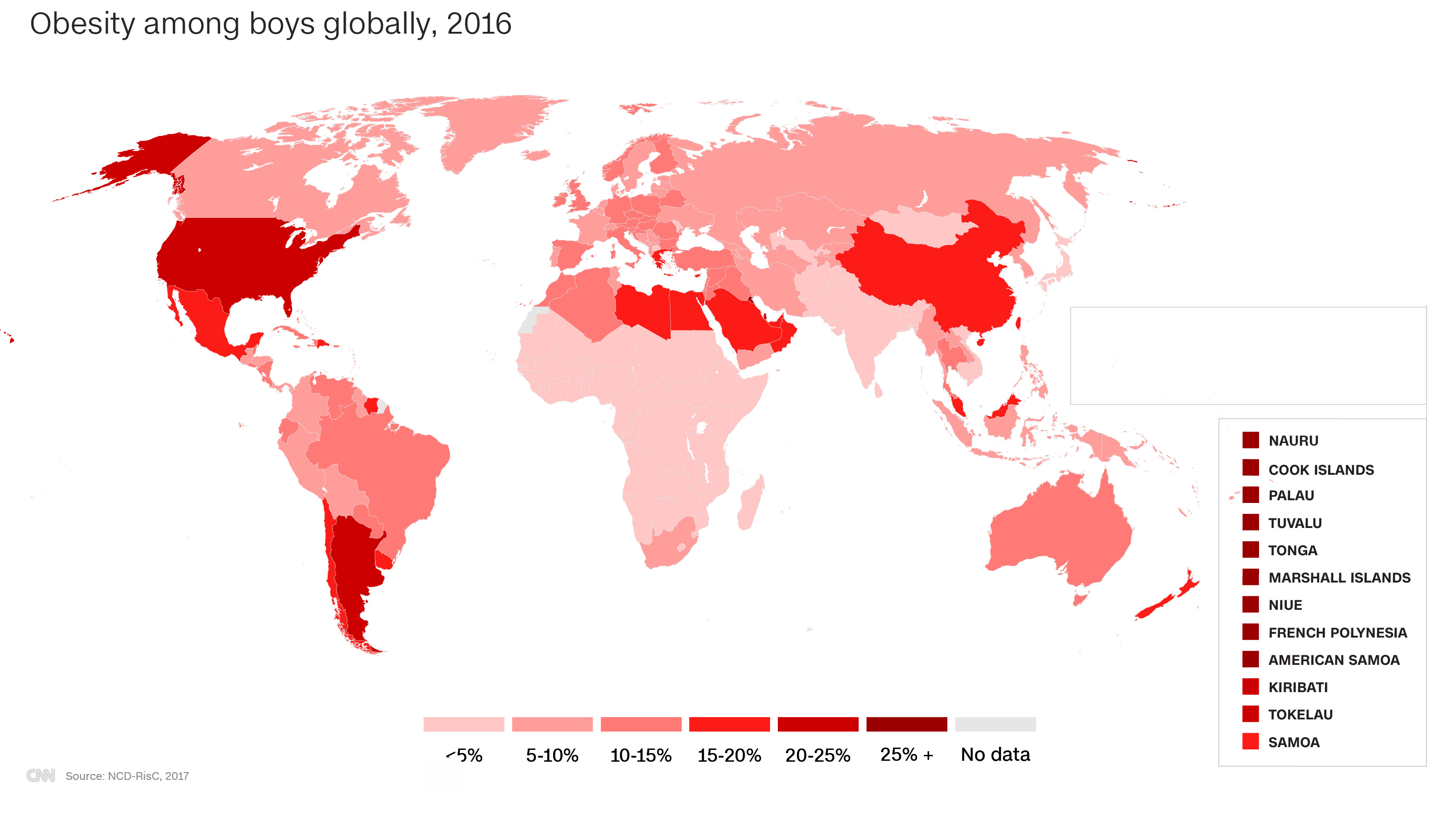 “Over the past four decades, obesity rates in children and adolescents have soared globally, and continue to do so in low- and middle-income countries,” said Majid Ezzati, professor of global environmental health at Imperial College London in the UK, who led the research.

“More recently, they have plateaued in higher-income countries, although obesity levels remain unacceptably high,” he said.

Over the same time period, the rise in obesity has particularly accelerated in East and South Asia.

“We now have children who are gaining weight when they are 5 years old,” unlike children at the same age two generations ago, Ezzati told CNN.

In the largest study of its kind, more than 1,000 researchers collaborated to analyze weight and height data for almost 130 million people, including more than 31 million people 5 to 19 years old, to identify obesity trends from 1975 to 2016.

Related Video What is obesity?

“Rates of child and adolescent obesity are accelerating in East, South and Southeast Asia, and continue to increase in other low and middle-income regions,” said James Bentham, a statistician at the University of Kent, who co-authored the paper.

Obesity in adults is defined using a person’s body mass index, the ratio between weight and height. A BMI of 18.5 to 24.9 is classified as a healthy weight, 25 to 29.9 considered overweight and 30 and over obese. Cut-offs are lower among children and adolescents and vary based on age.

“While average BMI among children and adolescents has recently plateaued in Europe and North America, this is not an excuse for complacency as more than one in five young people in the U,S. and one in 10 in the UK are obese,” he said. 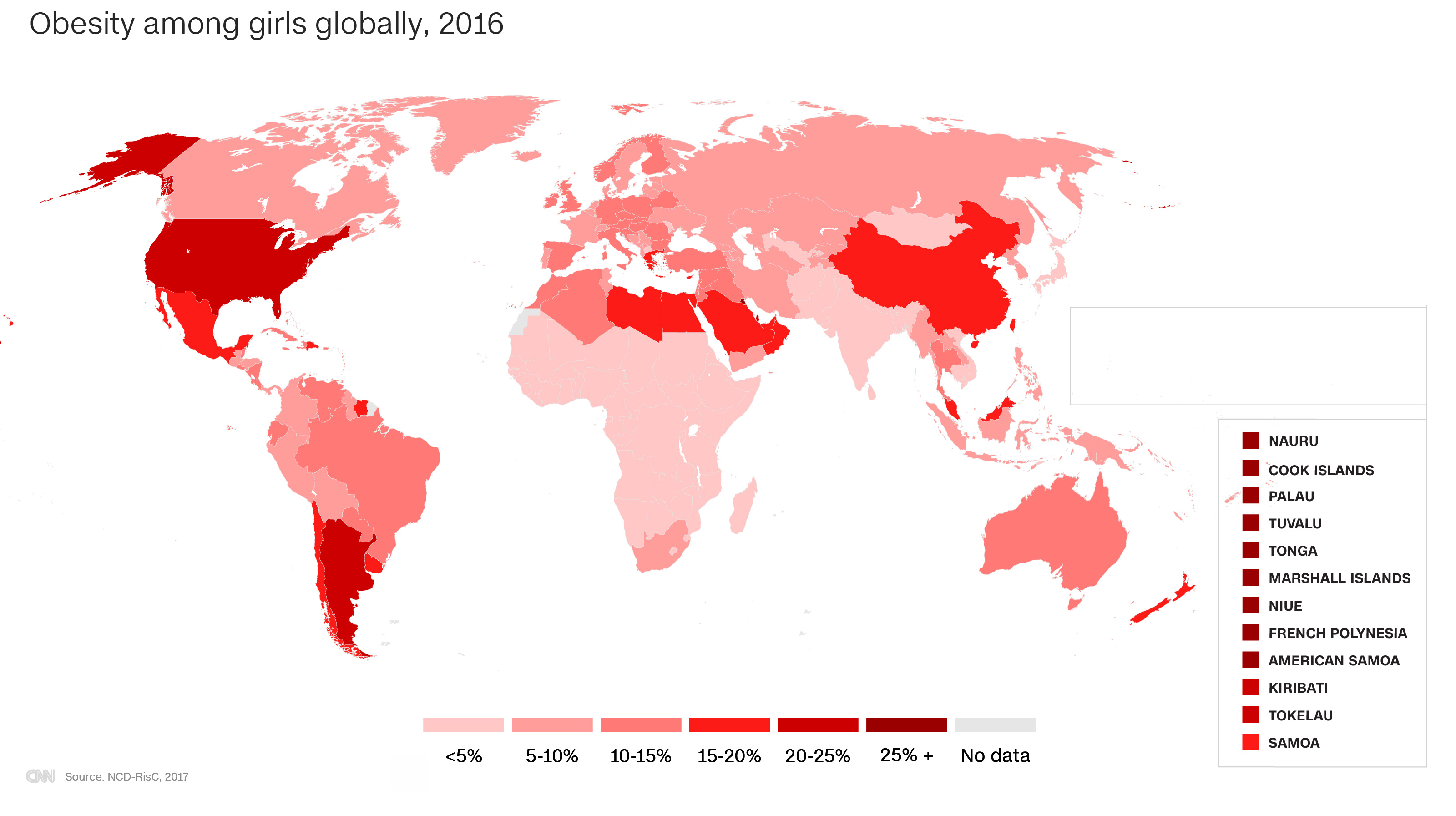 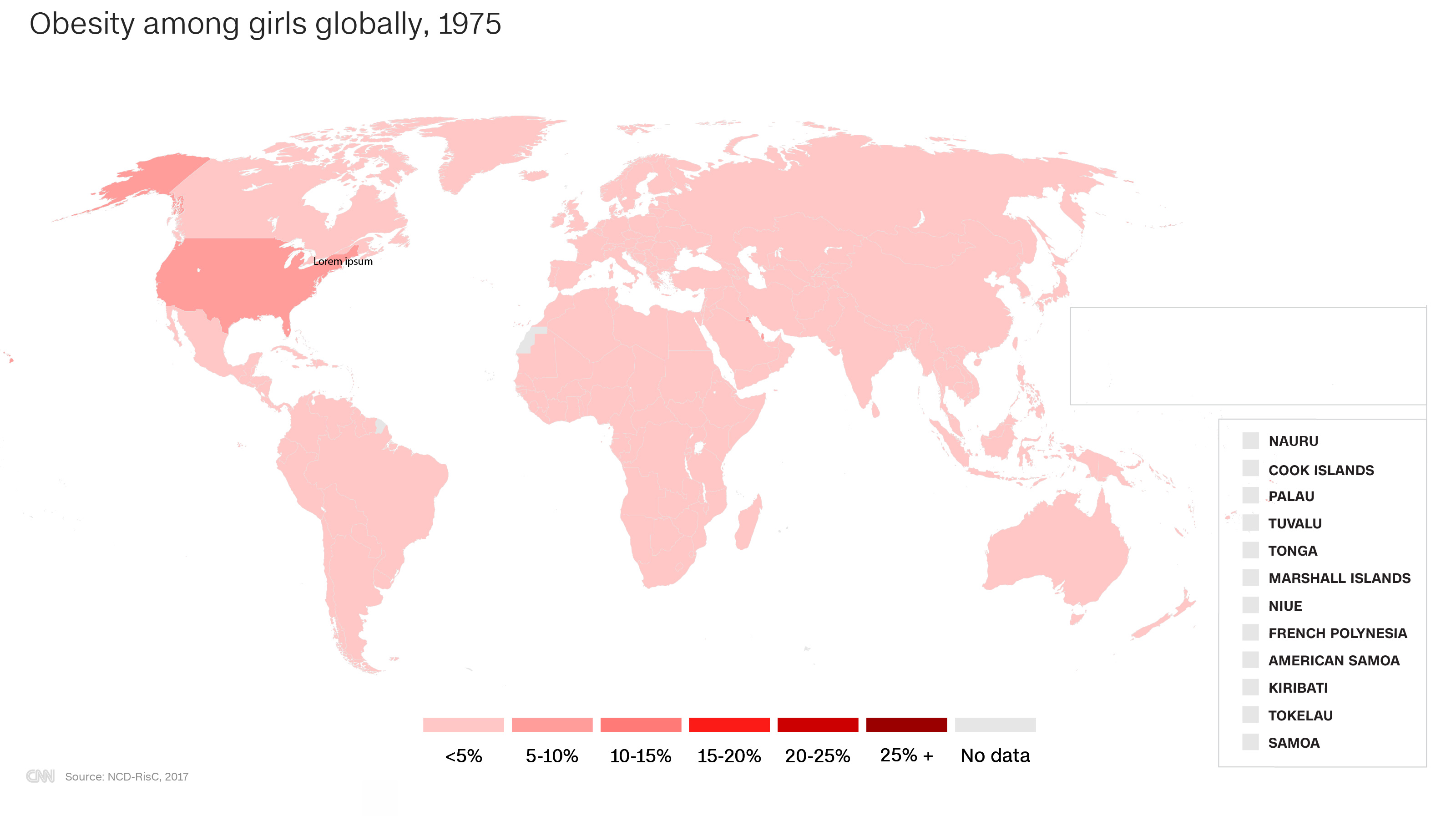 Greater risk as an adult

Being obese as a child comes with a high likelihood of being obese as an adult and the many health consequences that come with it, including the increased risk of diabetes, cardiovascular disease and some cancers.

THEO ROUBY/AFP/Getty Images
TO GO WITH AFP STORY BY CLAUDINE WERY People sit along the beach looking out at sea in Noumea on December 1, 2014. Obesity and diabetes are affecting citizens throughout the South Pacific islands, proportionately among the highest in the world, due to the change in eating habits and lifestyles as well as a genetic predisposition. AFP PHOTO/THEO ROUBY (Photo credit should read THEO ROUBY/AFP/Getty Images)

Related Article Why are these countries the most obese? Walking is just one reason

The potential for these chronic conditions into adulthood also puts an increased burden on health systems – and financial constraints on individuals.

“We are seeing very worrying trends with pediatricians who have children come in as young as 7 with type 2 diabetes,” said Temo Waqanivalu, programme officer for population-based prevention of non-communicable diseases at the World Health Organization. WHO co-led the research with Imperial College London.

Type 2 diabetes is typically an adult-onset condition, he told CNN.

The new research also revealed ongoing problems on the other end of the body mass spectrum – being underweight – with 192 million estimated to be moderately or severely underweight worldwide in 2016. In adults, being underweight is defined as a BMI under 18.5.

Barcroft Media/Getty Images
Ardi Rizal shows his photographs of smoking at the age of 2 years on April 15, 2017 in Sumatra, Indonesia.

Unlike the obesity trend, the number of children and adolescents who are underweight has been declining globally since 1975, the paper found, but numbers remain high.

Being underweight comes with its own health consequences among children and adolescents, including a greater risk of infectious disease and potential harm during pregnancy for adolescents and women old enough to have children.

“We mustn’t forget that undernutrition remains a major global public health problem,” commented Dr. Frank Hu, professor of nutrition and epidemiology at the Harvard T.H. Chan School of Public Health in the United States. Hu was not involved in the research.

“We’re experiencing this double burden of undernutrition and overnutrition at the same time,” Hu told CNN, adding that “this is nothing new.”

When asked about the key findings from this research, Ezzati highlights three points that need the most attention – that numbers of underweight children is persisting and obesity in high-income countries is plateauing, while the increase has sped up in East Asia. “Obesity and underweight are just as important,” he said.

Over the past four decades, many countries underwent a “nutrition transition” as their economies grew, explained Hu. In those countries, such as India and China, people on the higher socioeconomic end of the spectrum became obese, he said, while people on the spectrum’s lower end were underweight – at first.

“But when countries become more wealthy, the trends become reversed,” with the poorer population having access to cheaper, unhealthy foods and richer populations opting for healthier items, said Hu.

THEO ROUBY/AFP/Getty Images
TO GO WITH AFP STORY BY CLAUDINE WERY People sit along the beach looking out at sea in Noumea on December 1, 2014. Obesity and diabetes are affecting citizens throughout the South Pacific islands, proportionately among the highest in the world, due to the change in eating habits and lifestyles as well as a genetic predisposition. AFP PHOTO/THEO ROUBY (Photo credit should read THEO ROUBY/AFP/Getty Images)

Related Article Calling BS on BMI: How can we tell how fat we are?

“There is a continued need for policies that enhance food security in low-income countries and households, especially in South Asia,” said Ezzati. “But, our data also show that the transition from underweight to overweight and obesity can happen quickly in an unhealthy nutritional transition, with an increase in nutrient-poor, energy-dense foods.”

Experts believe countries therefore need to prioritize both problems, which they have not done to date.

“If programs have always targeted getting more calories into children, they’re not prepared when obesity hits, he said.

“Whoever is to blame for this epidemic, it’s not the children,” Waqanivalu said, adding that governments have created environments in which parents and children are surrounded by unhealthy food options and inadequate options for physical exercise.

“This data is stating what we have already said, but now quantifying the magnitude of the problem,” said Waqanivalu. “By releasing (the data), we hope to generate more political action from countries.”

Waqanivalu went on to explain there are proven measures that work to reduce obesity rates, such as sugar taxes, restricting marketing of unhealthy foods to children and policies to increase physical activity at schools.

“It’s our hope that countries will see how big the problem is (in their population), know the solution and be able to take some steps,” said Waqanivalu.

“This study is an important wake-up call for countries where childhood obesity if increasing rapidly, especially in parts of Asia where the economy is still developing quickly and the prevalence of childhood obesity is rising,” said Hu whose own work has explored the rise in obesity rates in China and India.

“Dietary patterns are changing rapidly and accelerating obesity … and will lead to chronic disease down the road,” said Hu.

Along with undernutrition, “we should be vigilant about both problems.”