President Trump pulled the wraps off his long-awaited tax overhaul plan. It’s a mix of massive tax cuts and a serious simplification of the tax code that he called a “once-in-a-generation opportunity.” So, what’s in it? It would collapse the number of personal income tax brackets from seven to three. It would double the standard deduction for married and single filers. And it would slash the corporate tax rate to 20% and dump the estate tax.

Now comes the hard part: getting this thing through Congress. Republicans know it will be a heavy lift, and Dems are billing it as a giveaway to Trump’s rich friends. The ambitious effort also comes on the heels of the Senate’s latest failure to repeal and replace Obamacare (though Trump now says he may take on the issue by executive order), as well as controversies over wealthy Trump Cabinet members living high on the taxpayer dime.

Health and Human Services Secretary Tom Price says he will pay back some of the cost of his private air travel, but that probably won’t be enough to quell this newest headache for the Trump White House. Price – who has used private charters for domestic travel and government aircraft for two international trips – will write a check for $51,887.31. That’s nice, but it only covers a fraction of the flights’ cost, estimated to be in the six figures. President Trump, Democrats and budget hawks in Congress aren’t happy, especially considering Price’s reputation as a fiscal conservative. Trump’s EPA and Treasury chiefs also have come under scrutiny over travel. The White House is moving to stop the use of private air travel by administration officials pending a review.

The effort to get aid to hurricane-ravaged Puerto Rico is being stymied by an almost 100-year-old law. The Jones Act requires all goods ferried between US ports to be carried on ships built, owned and operated by Americans. But now, it’s making it really expensive to ship stuff from the mainland to the island territory. There have been calls to suspend the act so aid can get to Puerto Rico faster, but so far, the President has only said he’s thinking about waiving the rule, which was suspended after Hurricanes Harvey and Irma.

A week after Hurricane Maria, Puerto Ricans are still desperate for help, and experts say a medical crisis is looming. Relatives here on the mainland are still trying to learn the fate of their loved ones, and a volunteer network of ham radio operators is making critical communications on the island possible. Celebrities, including the rapper Pitbull and Marc Anthony and Jennifer Lopez, are pitching in to help, and Trump’s inaugural committee has donated $3 million to relief efforts. Here’s how you can support survivors, too.

More misery may be headed for Puerto Rico. The island is under a flash flood watch as heavy rain is expected this weekend. That would no doubt exacerbate the recovery effort more than a week after Hurricane Maria hit. FEMA acknowledged that the response is slower than it would want, though one Trump official called the storm response a “good news story.”

At least one of the Facebook ads bought by Russians during the 2016 presidential campaign referenced Black Lives Matter and was specifically targeted to reach audiences in Ferguson, Missouri, and in Baltimore, sources with knowledge of the ads told CNN.

Ferguson and Baltimore had gained widespread attention for the large and violent protests over police shootings of black men. The decision to target the ad in those two cities offers the first look at how accounts linked to the Russian government-affiliated troll farm known as the Internet Research Agency used geographically targeted advertising to sow political chaos in the United States, the sources said.

Abu Bakr al-Baghdadi, the leader of ISIS, seems to have broken his almost yearlong silence in a new audio message. But wait, didn’t the Russians say they killed him in a May airstrike? US officials never really believed that, and this new audio, which they’re working to verify, will probably bear that out. The message seems to have been recorded recently – it mentions North Korea’s nuke threats against the US and Japan. Baghdadi also mocks the US and urges his followers to launch more attacks.

A social media campaign calling itself “Blacktivist” and linked to the Russian government used both Facebook and Twitter in an apparent attempt to amplify racial tensions during the US presidential election, two sources with knowledge of the matter told CNN. The Twitter account has been handed over to Congress; the Facebook account is expected to be handed over within days.

Trips to big-box retailers always end up with you picking up something you hadn’t planned to, like a newborn baby.

Jane Fonda, and pretty much all of social media, made this face when Megyn Kelly, on her new show, asked the Hollywood legend about plastic surgery.

Sorry, kids, you may be all hype about the iPhone X and its Face ID tech, but sadly, it doesn’t really work on your cute little baby faces.

Sole of the city

Oh, it’s just another walking tour of NYC. But it’s led by Sarah Jessica Parker, so of course, it involves shoes.

Catalonia, one of Spain’s 17 autonomous provinces, will hold a controversial referendum this weekend on independence. There’s disagreement on what the results of it should mean. Catalonia says this is a binding resolution, but Spain’s highest court banned the vote, saying it violates the constitution. Some in the province complain that Catalonia’s industries pretty much subsidize the rest of Spain’s economy and feel its unique culture and language warrant an independent state.

The maximum number of refugees who’d be allowed to resettle in the United States in the coming year under a new Trump administration plan. It’s fewer than half the number President Barack Obama had proposed for this fiscal year.

“Social movements lack the capacity to be sued”

“I don’t know what my future holds for me.” 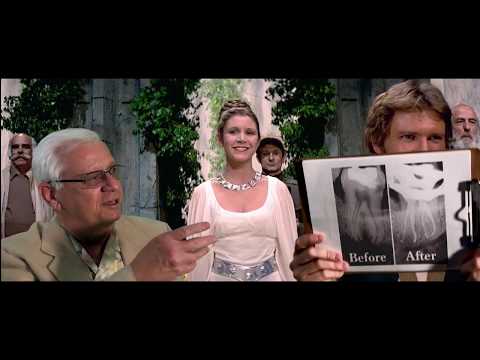 May the farce be with you

An Arkansas dentist digitally inserts himself into “Star Wars” clips to promote his practice, and it’s the best thing you’ll ever see – possibly in your life. (Click to view)