"(The) roundtable is about listening and learning," Grisham said

"The well-being of children is of the utmost importance to me," Trump said

First lady Melania Trump on Thursday led her first roundtable discussion on a policy issue, signaling she is adding the opioid crisis and its effects on families and children to her portfolio.

“The well-being of children is of the utmost importance to me and I plan to use my platform as first lady to help as many kids as I can,” said Trump, who invited 10 guests to the White House State Dining Room.

Some of the invitees’ lives were directly affected by opioid abuse and others work in the drug recovery field. Other attendees included Health and Human Services Secretary Tom Price, New Jersey Gov. Chris Christie and Kellyanne Conway, counselor to the President.

“(The) roundtable is about listening and learning,” East Wing communications director Stephanie Grisham told CNN. “She wants to speak with as many people as possible and get their feedback on ways she can use her role as first lady to help with this epidemic.”

Grisham added Trump is focusing on youth drug prevention and education to help combat the epidemic at the earliest ages, something the first lady reiterated in her brief opening remarks at Thursday’s event.

“With the many issues (children) face as they are growing up, drug addiction, especially opioid abuse, is one of those issues,” said Trump, who was wearing a crisp white shirt under a black suit jacket. “I look forward to working alongside the Presidential Opioid Commission, and people such as yourself, to do all we can to teach children the dangerous consequences of drug abuse.”

Her message was similar to the children-centric speech Trump gave at a luncheon in New York City last week, which provided the clearest outline yet of her formal platform initiatives.

“Whether it is drug addiction, bullying, poverty, disease, trafficking, illiteracy or hunger, it is the children who are hit first and hardest in any country,” Trump had said during the luncheon. “And as we all know, the future of every nation rests with the promise of their young people.”

The addition of the opioid crisis to Trump’s agenda comes as the nation’s drug problem spirals out of control, with overdose death rates mounting by the thousands.

“As more young Americans, families and communities struggle to overcome the stigma and the suffering, the first lady’s leadership is vital,” Conway told CNN. “By leading open and honest discussions about the urgency and scale of this opioid crisis, and hearing the stories and solutions from across the country, the first lady joins the President in telling the nation we are unified and committed to helping.”

On August 8, the first lady sat beside her husband in a conference room at his Bedminster, New Jersey, golf club, breaking from her summer respite to attend a briefing and discussion on the country’s opioid crisis, led by Conway and Health and Human Services Secretary Tom Price.

Shortly afterward, President Donald Trump said he was moving forward to declare the epidemic an emergency.

“The opioid crisis is an emergency and I’m saying officially right now it is an emergency,” the President told reporters. “We’re going to draw it up and we’re going to make it a national emergency. It is a serious problem, the likes of which we have never had.”

As of Thursday, that official emergency declaration is still tied up in process and review.

“We certainly welcome the first lady’s interest in this issue,” says Gary Mendell, founder and CEO of a national nonprofit called Shatterproof that works to combat addiction. Mendell’s son died of a drug overdose in 2011.

“So far, the administration has talked about the opioid crisis facing our country but has yet to undertake specific actions that will help those suffering today,” he said.

A White House spokesman told CNN the status of the national emergency declaration is still in flux.

“The President’s policy advisers are working through the details with all of the relevant components and agencies. Right now these actions are undergoing a legal review,” he said.

However, since the creation of the President’s Commission on Combating Drug Addiction and the Opioid Crisis in March, the President has been regularly briefed on the topic, and in May signed off on a requested $500 million towards the opioid crisis in his 2018 Budget.

On Wednesday, New Jersey Gov. Chris Christie held the third formal meeting of the committee, outlining new objectives for limiting the length of prescriptions for opioids, and unveiling new research goals for medications that are non-addictive.

For the first lady, Mendell advises the primary need would be for her to use her influence to help normalize addiction as a disease like any other.

“The most powerful thing Mrs. Trump can do is help remove the stigma that surrounds addiction or substance use disorder,” he said. “Though stigma can seem harmless, we know it isolates people and discourages them from seeking treatment, directly damaging their chances of recovery.” 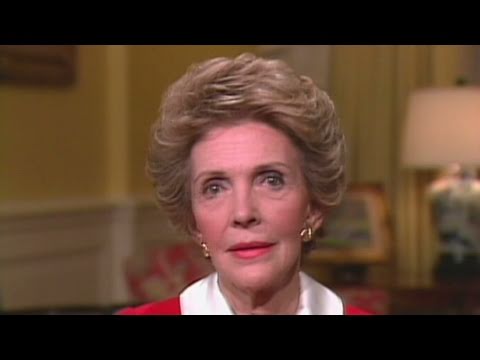 The slogan and accompanying ad campaign took off, and the mantra seeped into the popular culture of the 1980s, fueled by Reagan’s high-profile and public appearances. Reagan’s statement, “Say yes to your life. And when it comes to drugs and alcohol, just say no,” is one of the most well-known components of her legacy.

“Throughout her husband’s campaign, Mrs. Trump met families who had been affected in one way or another by drug addiction,” Grisham said. “She has been very thoughtful about her platform, and recognizes that this is one of the ways she can help effect positive change with children across the country.”

Trump told the panel she was continuing her listening tour as first lady.

“I’m here today to listen and learn from all of your stories and hope you will feel free to give me your thoughts and opinions on how best I can help,” she said.