Eminem’s explosive four-and-a-half-minute freestyle slamming President Donald Trump on Tuesday night is as much a passionate rejection of the President as much as it is a wholehearted embrace of Colin Kaepernick and his message on racism and police brutality.

In one of the most dramatic moments in the fierce freestyle, which aired at the BET Hip Hop Awards, the Detroit rapper raised his fist and rapped: “F— that, this is for Colin, ball up a fist and keep that s— balled like Donald the b—-.”

I appreciate you @Eminem ✊🏾 pic.twitter.com/nwavBwsOkQ

“I appreciate you @Eminem,” Kaepernick tweeted, along with a fist emoji.

The former San Francisco 49ers star had been name-dropped in hip-hop lyrics before he took a knee last year during the National Anthem, but some of the most memorable mentions came over the past year as artists rallied behind his message.

The former San Francisco 49ers quarterback is now a free agent after his protest against police brutality. Eminem previously expressed his support for Kaepernick in “Campaign Speech.”

Trump has remained defiant in his feud with athletes who take a knee during the National Anthem, insisting that NFL owners should fire players who engage in this protest.

But while Kaepernick has been ostracized, shunned and relentlessly booed on the football field, in hip-hop there seems to be nothing but love for the former 49ers quarterback.

Hip-hop artists like Jay-Z and J. Cole have been vocal about their support for Kaepernick – who has not been signed by an NFL team this year – and several artists, including Eminem and Kendrick Lamar, have referenced him in their lyrics.

Here’s a list of seven of the strongest Kaepernick lyrics, the first of which also comes from Eminem:

‘And got slapped with a Colin Kaepernick practice sock’

In Eminem’s “Campaign Speech” – an explosive eight-minute freestyle released in October 2016 – the Detroit rapper skewers President Donald Trump, his supporters and references Kaepernick in a violent verse where he describes slapping a dying cop with a “Colin Kaepernick practice sock.”

You can listen to the song on SoundCloud. (The Kaepernick lyric comes in at around 1:55).

‘Colin Kaepernick was more than worthy’

In his feature on Mary J. Blige’s 2016 cover of “American Skin (41 Shots),” Kendrick Lamar gives Kaepernick a shout-out while rapping about police brutality: “Yellow tape tied around the street/ Colin Kaepernick was more than worthy.”

The song is a remake of Bruce Springsteen’s “American Skin (41 Shots),” which was originally released more than 15 years ago and inspired by the 1999 police shooting death of Amadou Diallo.

Blige originally sang the song while having an Apple-sponsored conversation with former Democratic presidential candidate Hillary Clinton, and some fans mocked Blige for holding Clinton’s hand while singing it. She later released a version of the song with Lamar’s verse.

You can listen to the Lamar version on “Consequence of Sound” here.

On this politically-charged track “Kneelin’ on Needles,” Lupe Fiasco slams the NFL’s treatment of Kaepernick: “And it’s not about natural ability/ You would think that Kaep took a s— on the Statue of Liberty, g–damn.”

The song also begins with a shout-out to Kaepernick: “Kaepernick, what up? I knew they were going to do that to you. But it’s all good, though. You got to stand up for something.”

The Chicago rapper is likely referencing the fact that Kaepernick remains a free agent. 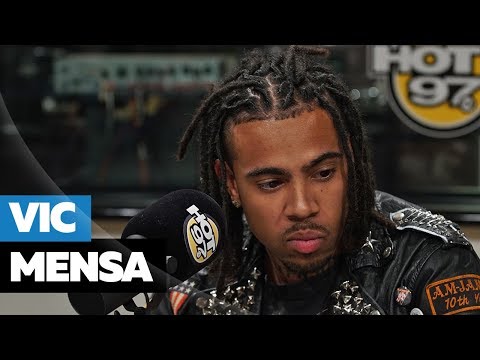 Chicago rapper Vic Mensa, who recently spoke with CNN’s #GetPolitical about social activism, name-drops Kaepernick in a September freestyle on Hot 97’s “In Flex We Trust.”

“The youth is lost, they said they need someone to believe in/ We forgot the dream since Martin Luther’s kingdom,” Mensa raps at the beginning of the second verse (it starts around 3:00).

“If I could rule the world, I’d free ‘em all, Mumia Jamal/ Aaliyah flight wouldn’t have took that fall,” he added. “Colin Kaepernick would still play ball/ They treat n***** like MC Shan and keep us down by law.”

In Raekwon’s “Purple Brick Road,” Oakland rapper G-Eazy urges people to stand up for what they believe in like Kaepernick did: “Believe in something, stand for it or take a knee and stand like Kaepernick.”

‘They tried to turn us into the villains like Colin Kaepernick’

Chamillionaire raps about the anger and hate directed at Kaepernick, who was accused of being anti-American, in his feature on fellow Houston rapper Trae Tha Truth’s “I’m on 3.02”:

“We gon’ take the White House and get back in it/ They tried to turn us into the villains like Colin Kaepernick.”

‘In a Kaepernick jersey, I ain’t standing for the flag’

In a Kaepernick jersey, I ain’t standing for the flag

In his 2016 song, “Just Politics,” which was released about a week following the 2016 general election, Masschusetts rapper Termanology laments the state of race relations in America and expresses his support for Kaepernick, rapping that he also won’t stand for the National Anthem:

“In a Kaepernick jersey, I ain’t standing for the flag/ Might as well be the Confederate, the way they so devilish/ Treat men in blue above the law, like we irrelevant.”

For more on hip-hop and politics: Check out CNN’s #GetPolitical

Are there more good ones that we missed? Share them with @CNNPolitics on Twitter with the #GetPolitical.