Apocalyptic. Catastrophic. Strong adjectives to be sure, but people on the ground in Puerto Rico say even those words don’t adequately describe the scale of the devastation that Hurricane Maria brought to the US commonwealth. Scores of buildings are destroyed, power is out in most places, communications are almost nonexistent. And now a busted dam threatens more flooding.

Puerto Rico’s governor is urging Congress to OK an aid package as soon as possible. He’s also reminding us of something we should already know – Puerto Ricans are Americans, too, and deserve help. Critics say President Trump hasn’t done enough (and is spending too much time tweeting about football protests instead of the island’s plight), but the White House says the administration’s response has been anything but slow. Planes and ships loaded with food, water and generators are on the island or headed that way.

And Maria’s not done yet. The storm’s churning away in the Atlantic, bringing high winds and pounding surf to the US East Coast, especially North Carolina. The storm is due to weaken into a tropical storm tonight and continue to move away from the southeast coast of the United States.

The NFL continued its defiance of President Trump’s criticism of those who protest during the National Anthem. Ahead of the “Monday Night Football” game between the Dallas Cowboys and the Arizona Cardinals, Cowboys owner Jerry Jones and Dallas players knelt before the anthem – prompting boos from the crowd – then stood and locked arms as the anthem played. Cardinals players stood and locked arms, too. Jones’ participation was noteworthy because he’s criticized such displays in the past.

Trump continued to lob on criticism, tweeting about what he called the “tremendous backlash” against the NFL and its players over the protests, dubbed #TakeAKnee on social media. Some NFL fans are burning their jerseys; a restaurant in Louisiana won’t show NFL games anymore; and Buffalo Bills employee quit his job. Now, the jersey of Alejandro Villanueva – the ex-Army Ranger and lone Pittsburgh Steelers player who came out of the locker room and stood for the anthem – is the top seller in the NFL.

Video Ad Feedback
02:26 - Source: CNN
#TakeAKnee heats up on and off the field

The GOP drive to get rid of Obamacare may really be dead. No, we mean it this time. Sen. Susan Collins of Maine officially came out as a “no” vote on the Graham-Cassidy bill, the GOP’s latest vehicle to get rid of the Affordable Care Act. It happened as the Congressional Budget Office released its prediction that millions of people would lose comprehensive health insurance under the bill. With John McCain another definite “no” and Rand Paul and Lisa Murkowski leaning that way, Republican Senate leaders just don’t have the votes.

Now, talk has begun of possibly tacking on an Obamacare repeal bill in 2018 to tax reform legislation, but the prospect of taking on those two heavy lifts at the same time seems like a horrible idea to some GOP lawmakers.

North Korea: The US has declared war on us. The United States: No, we haven’t. That’s where things stand right now in the increasingly hostile tit-for-tat between the US and North Korea. The North’s foreign minister said President Trump declared war when he tweeted over the weekend that North Korea “won’t be around much longer.” The White House said the foreign minister’s reasoning is absurd. The North says since the US started this, it has the right to shoot down US planes near North Korean airspace. Tensions are so high between the countries right now, some fear war may accidentally break out.

Several dozen conservative Catholic scholars and clergy accused Pope Francis of spreading heresy. No one’s done anything like this for quite a while – like, not since 1333. In a letter, the group claims Francis is “misleading the flock” with his openness to allowing some divorced and remarried Catholics to receive holy communion, among other concerns. But Catholic observers don’t think this brouhaha will go anywhere. Many of the letter’s signees are part of a traditionalist group that’s already broken away from the church. But it does highlight the anxieties some of the church’s more conservatives members are feeling about Francis’ tenure.

Cheaper to open up a science book

Rapper B.o.B wants to launch satellites into space to prove that the Earth is flat (no, really), so of course he’s launched a GoFundMe campaign to do it.

We want to feel weird, too

PGA golfer Justin Thomas won $10 million this weekend for his domination this season on the links. So, why on earth does he feel “weird” about it?

No need to go to Venice to experience Venice. Soon, you’ll be able to enjoy the Italian city’s beautiful canals and gondolas in Dubai.

Netflix wants to make it easier for us to binge-watch its shows and movies on planes because obviously the billions of hours we spend watching them now aren’t quite enough.

Megyn Kelly’s post-Fox News life continued with the launch of her daytime talk show on NBC, and it was, well, more than a little awkward.

That’s the new minimum wage for Target employees. And the retailer says by 2020, it’ll raise it to $15 an hour.

Stuck at the airport all night long? Then you’ll have nothing better to do than grab some airport workers and make a music video to a Lionel Richie ’80s classic. (Click to view)

All Night Long at The Airport 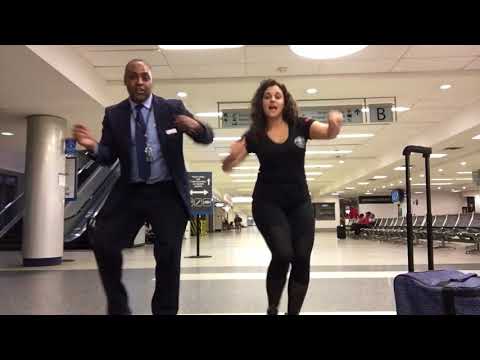 CORRECTION: An earlier version of this story said the Dallas Cowboys players and owner Jerry Jones took a knee during the anthem at Monday’s NFL game. The Cowboys knelt before the National Anthem, then stood and locked arms while the anthem was played.