She said the protest falls under the players' First Amendment rights

Rep. Sheila Jackson Lee, D-Texas, took a knee on the House floor Monday night in solidarity with NFL players who knelt during the National Anthem following President Donald Trump’s criticism of the protest.

“There is no basis in the First Amendment that says that you cannot kneel on the National Anthem or in front of the flag,” she said.

Lee said Trump had a “lack of judgment” to comment on the players’ freedom of speech.

The national anthem in sports (spoiler: it wasn't always this way)

“There is no regulation that says that these young men cannot stand against the dishonoring of their mothers by you calling them to fire the son of a B,” she said. “You tell me which of those children’s mothers are a son of a B. That is racism.” 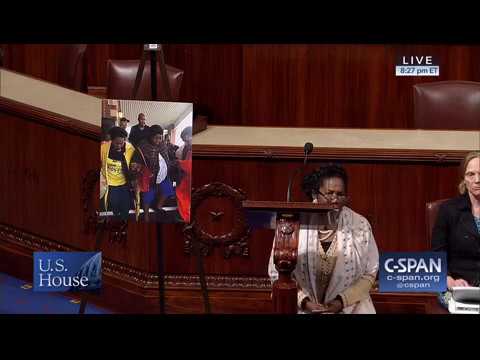 At a rally for Alabama Republican Sen. Luther Strange on Friday, Trump said NFL team owners should respond to the protest against police brutality by saying, “Get that son of a bitch off the field right now, he’s fired. He’s fired!” His comments – and repeated tweets on the matter – have escalated a nationwide controversy that has significant racial and cultural undertones.

Colin Kaepernick – at the time with the San Francisco 49ers – initially sparked controversy when he refused to stand for the National Anthem last year, saying he would not display pride for a flag that “oppresses black people and people of color.”