Even taking acknowledged liberties with what’s billed as a “mostly” a true story, “Victoria & Abdul” is such a fascinating, relevant slice of history it’s a shame that the movie isn’t a bit less superficial. Anchored by Judi Dench’s towering presence, what emerges is a small-scale film on the order of “Driving Miss Daisy,” yet which leaves its protagonists’ motives frustratingly murky.

Set in 1887, the movie finds Dench’s Queen Victoria bent and wizened, an octogenarian who has outlived most of her contemporaries and has little use for the toadies around her. The monarch is unexpectedly smitten, for want of a better word, by Abdul Karim (Indian star Ali Fazal), a young clerk who has been dispatched from India to deliver a gift as part of the Queen’s Golden Jubilee.

Abdul appears to instinctively reciprocate that admiration, for reasons that writer Lee Hall (“Billy Elliot”) and director Stephen Frears (“The Queen”) leave vague. As his perplexed colleague (Adeel Akhtar) notes, the British have done no favors to their homeland as a colony, which makes his immediate devotion puzzling.

Simply put, it would help if we knew more – indeed, almost anything – about him. While there’s nothing wrong with being inspired to Google the subject after watching a movie, it shouldn’t feel like a prerequisite.

Abdul becomes the queen’s constant companion and Munshi, or teacher, instructing her about India, Urdu and Islam. The relationship unsettles the court, breeding suspicion regarding his motives from such quarters as the queen’s son (Eddie Izzard), doctor (Paul Higgins) and Prime Minister (Michael Gambon, briefly). 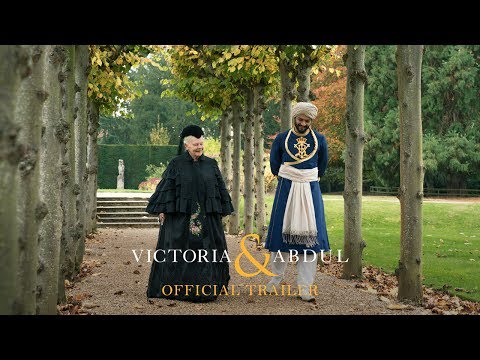 Not surprisingly, the movie is exquisitely appointed, in the spirit of old Merchant-Ivory productions, and often quite funny. In one scene, a hall filled with elegantly dressed guests race to keep up as the queen rapidly devours her dinner, with the waiters instructed to serve and remove the multiple courses at her pace.

There is a certain fascination in seeing these two people – sovereign and servant – bridge the cultural divide, but the movie would pack more of an emotional wallop if it dug deeper beneath its well-manicured surface. “I’m so lonely,” Victoria heartbreakingly confesses at one point, which still doesn’t do much to clarify why Abdul occupies that void.

Mostly, the film serves as an opportunity to savor Dench’s regal performance, while highlighting the cruelty of British colonialism and in no small way the cultural rifts and distrust that still linger.

Like that aforementioned banquet, “Victoria & Abdul” is in some respects a sumptuous feast. Yet it’s one that doesn’t prove substantial enough, ultimately, to be wholly satisfying.

“Victoria & Abdul” will open in New York and Los Angeles on Sept. 22 before expanding to other cities. It’s rated PG-13.