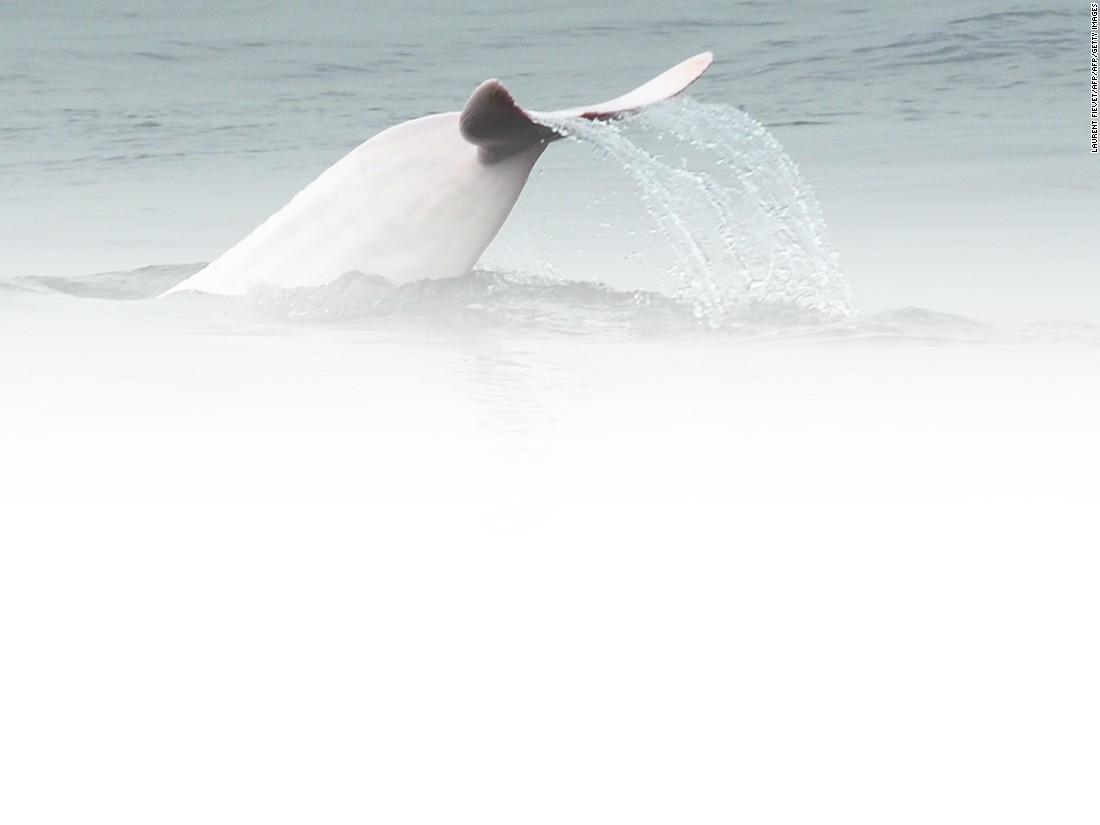 A Chinese white dolphin seen in the waters around Hong Kong.

Soon all of Hong Kong's dolphins will be dead

Sitting in a white plastic lawn chair, staring intently through a pair of large, black binoculars, Charlotte Lau pulls a multicolored scarf high over her face and zips up her grey hoodie.
Down a steep staircase in the boat's main cabin, her boss Taison Chang sorts through the supplies piled on seats and a wide, curved table -- maps and charts, a GPS tracker, snacks, waterproofs, two-expensive cameras with long lenses, and several bottles of suncream in defiance of the dreary skies overhead.
Next to Lau, holding a walkie-talkie and shivering in a blue t-shirt, Viena Mak writes on a clipboard as her co-worker says: "no sighting."
It's a phrase the trio are becoming depressingly used to. They work for the Hong Kong Dolphin Conservation Society (HKDCS), which sends researchers out almost every day, no matter the weather, to search the city's waters for an ever-shrinking population of dolphins.
Read More
Their relentless work matters, not just to keep a few individual animals alive, but as a test of whether Hong Kongers can have more of a say in how their city progresses, take a step back from the mega projects and uninhibited development that have characterized Hong Kong for decades, and act to preserve what made it special in the first place.
Charlotte Lau and Viena Mak from the Hong Kong Dolphin Conservation Society survey the waters near Lantau Island.

On a day in July 1637, British explorer and trader Peter Mundy sat at anchor aboard the ship "Planter," near what was then still the Portuguese colony of Macau.
Mundy -- who would go on to help introduce tea to the UK, forever changing British drinking habits and imperial priorities -- wrote in his diary, "the Porpoises here are as white as Milke, some of them Ruddy withall."
It was one of the first recorded mentions of the Chinese white dolphin, but would go largely unnoticed until another European, Swedish missionary and naturalist Pehr Osbeck wrote of "snow-white dolphins (which) tumbled about the ship" and suggested a scientific name for them: "delphinus chinensis."
European explorers Peter Mundy and Pehr Osbeck were among the first to record sitings of the Chinese white dolphin.
Now officially the Sousa chinensis (to reflect their relation to the wider Sousa, or humpback dolphin, genus), the animals are more commonly known as pink dolphins due to their pink bubblegum-like coloring in adulthood.
Growing up to 2.5 meters (8.2 feet) in length, with short, stubby snouts and small dorsal fins high up on their arched backs, pink dolphins have lived in the waters around Hong Kong for hundreds of years, as the human population grew from the low thousands in the 1600s to the millions today.
Throughout that time, pink dolphins -- and to a lesser degree the finless porpoise, another local cetacean -- were a common sight for Hong Kong fishermen, who regarded the animals as a catch-stealing nuisance at best, and an evil omen at worst.
Pink dolphins have lived in Hong Kong's waters for centuries.
Seeing pink dolphins leap out of the water was said to be a harbinger of storms; one old story has it that in 1941, fishermen off Yau Ma Tei saw a particularly large pod cresting three days before the Japanese Air Force began bombing the city.
While some saw dolphins as having an effect on human affairs, no one took much mind of what people might be doing to the dolphins until the 1990s, when scientists began sounding the alarm that population numbers were plummeting.
Today, there are an estimated 10,000 pink dolphins globally, with the largest population, around 1,200, in the Pearl River Delta region. HKDCS estimates 47 dolphins currently make the city's waters their home.

Hong Kong is dense. The city squeezes 7.4 million people into an area three times smaller than Rhode Island, with 57,250 people per square kilometer in the busiest neighborhoods.
For hundreds of years, the solution to this density has to be to carve out a bit more space by filling in parts of the sea. Industrial land reclamation began in earnest in the late nineteenth century, as the city's British rulers attempted to expand their new possession by dredging out bays and advancing shorelines.
At its most basic level, land reclamation is the process of scooping rock and other materials from a hillside and dumping them into the sea until the resulting pile is high enough to be built upon. However, this method results in "large displacement of the marine sediments and the development of mud-waves beneath the reclamation fill," <a href="http://www.cedd.gov.hk/eng/publications/geo_report