‘Battle of the Sexes’ is easier to like than love

“Battle of the Sexes” is an easy movie to like, but with apologies to its tennis backdrop, not quite love. Deftly recreating the Billie Jean King-Bobby Riggs match with Emma Stone and Steve Carell perfectly inhabiting the key roles, the power of the story carries the day, overcoming places where this slight film exhibits as much finesse as an overhead smash.

Those who weren’t alive or were barely cognizant in 1973 might be hard-pressed to believe the circus-like atmosphere that surrounded this televised showdown, with Riggs – a notorious tennis hustler, looking for thrills and a payday at the age of 55 – dreaming up the idea of playing against a top-ranked woman, eagerly feeding off the publicity as a male chauvinist pig eager to strike a blow against women’s lib.

The casual sexism of the time permeates the movie, but the real oomph comes from the actual clips that prove this isn’t just hyperbole, such as ABC Sports’ Howard Cosell musing about how Hollywood-pretty King would be if she just lost the glasses and let her hair grow out.

BATTLE OF THE SEXES I Official Trailer | FOX Searchlight 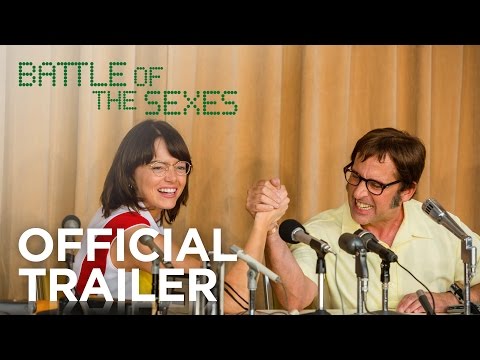 Yet “Battle of the Sexes” is considerably stronger off the court than on it, volleying back and forth between the personal lives of its two combatants, in a fashion that nicely humanizes both while occasionally feeling a tad heavy-handed and on the nose.

Directed by Jonathan Dayton and Valerie Faris (“Little Miss Sunshine”) from a script by “Slumdog Millionaire’s” Simon Beaufoy, the movie’s structure is largely framed by the relationship struggles of its two protagonists. In this tennis story, love means a whole lot.

King, although married to a man, meets a woman (Andrea Riseborough) and must come to grips with the fact that she’s a lesbian. Riggs’ gambling, meanwhile, has strained his marriage and left his wealthy wife (Elisabeth Shue) at her wits end.

Coming off her Oscar for “La La Land,” Stone excels in conveying King’s inner turmoil, as she wrestles with the implications of the public and private aspects of her life colliding. Carell, too, turns Riggs into a surprisingly sympathetic figure – a Peter Pan type, desperate to find some way to avoid wearing a tie and toiling away for his father-in-law’s company.

As played, though, there’s scant subtlety in the juxtaposition of those scenes, or in the movie’s most relevant plot: King leading a revolt by female players against the stodgy tennis establishment, personified by Jack Kramer (Bill Pullman), over unequal pay. Men are simply “more exciting to watch,” Kramer assures her, explaining why an upcoming tournament will pay them eight times what their female counterparts make.

Oddly, the match itself feels almost anticlimactic, with the more interesting elements involving the media frenzy leading up to it and the emotional aftermath. It would have been nice, for example, to hear some discussion of King’s strategy to run her older opponent all over the court.

By then, “Battle of the Sexes” has shown enough game, dramatically and historically, to make this trip down memory lane worth taking. And if the movie doesn’t always serve aces, in terms where women stood then offering a prism into the present, it certainly makes its point.