How the iconic ‘Whose streets? Our streets!’ chant has been co-opted

Police in St. Louis were seen chanting "Whose streets? Our streets!" over the weekend

As peaceful protests gave way to violence in St. Louis over the weekend, a group of police officers were heard repeating a familiar chant.

STLPD chanting who's streets? Our streets, after arresting Z 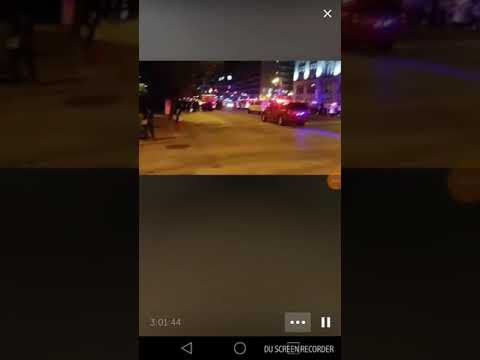 To many, it was startling. The chant, most often used as a rallying cry for people protesting oppression, had been appropriated by those in authority.

“It’s about asserting one’s claim to public space. Protesters have used it to say, ‘We’re gathered here. We’re significant by virtue of being here expressing our viewpoints. And we matter as inhabitants of this space,” said Tamar Carroll, an associate professor of history at Rochester Institute of Technology. She recently co-curated an exhibition, “Whose Streets? Our Streets!” at the Bronx Documentary Center.

“The police were using it to claim their right to the city, to claim ownership of the streets and the public spaces.”

The phrase has been used by LGBTQ activists, immigration activists, and most pertinently, black activists at intense junctions of racial tension.

While its history stretches back decades, the chant has experienced a groundswell in the last few years as more and more people took to protesting police violence, racial inequality and other injustices.

“From the time I was photographing demonstrations in the early ’90s, that was a chant that was pretty much ongoing,” said Meg Handler, a photographer who also was a co-curator of the “Whose Streets?” exhibition. It was used in labor demonstrations and at rallies for reproductive rights and advocacy for AIDS victims, she said.

To say it is a “Black Lives Matter” chant isn’t wrong. The group is definitely associated with the phrase and it’s central to many of their messages.

It was heard in Ferguson, Missouri, in 2014 after the fatal shooting of Michael Brown, and was so crystallized during those protests that it inspired the title of a documentary about the community’s reaction to Brown’s death.

It appeared again that year in New York City after the killing of Eric Garner. It was heard in Washington on President Trump’s Inauguration Day and the day after at women’s marches around the world.

"Whose streets? Our streets!" pic.twitter.com/B9ecG083SV

But lately the chant has made its way to groups on the other side of the sociopolitical spectrum. It was barked by white nationalists as they marched, tiki torches in hand and Nazi regalia on display, down the streets of Charlottesville, Virginia, last month. A Vice documentary on the Charlottesville protests features ample footage of the chant.

“It’s never, to my knowledge, been tied to a single social movement,” said Carroll, the historian. “That’s why it makes it possible to be appropriated by a counter movement.”

It’s unclear whether the St. Louis officers who chanted it were doing so to mock protesters or appropriating it for their own message.

CNN has reached out to the St. Louis Metropolitan Police Department for comment but hasn’t heard back.

Sunday night’s unrest was prompted by the acquittal of a former St. Louis police officer who was charged with first-degree murder after shooting and killing Anthony Lamar Smith, a black man, in 2011.

“I think that will probably not improve police relations with the Black Lives Matter protesters.”