There is a planned tribute concert in L.A.

“One More Light” features footage of the band and Bennington, who committed suicide in July.

“‘One More Light’ was written with the intention of sending love to those who lost someone,” band member Mike Shinoda said in a statement. “We now find ourselves on the receiving end.” 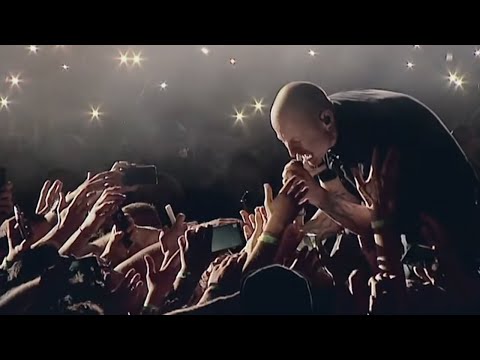 The band has also announced a planned tribute concert in Bennington’s honor.

The one-night-only celebration will take place at the Hollywood Bowl in Los Angeles, California, on October 27.

Shinoda told radio station KROQ it will “be super super hard… we haven’t gone out together in public, we haven’t played.”

“I thought it over, and I know for some of the guys in the band, getting onstage is more scary than for other guys in the band,” he said. “But I will say for all of us, it’s definitely the thing we want to do.”

The concert will feature other guest artists, but the line-up has not been announced yet.

Hahn said in a statement that working on and watching the video has been incredibly difficult.

“I feel that by doing it, we not only faced some of our biggest fears, but it enabled us to use our talents to bring some light to people who need it,” he said. ” As we move forward to the Hollywood Bowl show and beyond, I think about the people who connect with the band, outside and inside our circle. This video is a gesture of good will to the people who want that connection.”

The band’s members will contribute their fees from the concert to Music For Relief’s One More Light Fund in memory of Bennington.

The music video, which was released Monday, quickly went viral, racking up almost 3 million views on You Tube in less than 24 hours.

“In memorial events, art, videos, and images, fans all over the world have gravitated towards this song as their declaration of love and support for the band and the memory of our dear friend, Chester,” Shinoda said. “We are so very grateful and can’t wait to see you again.”