Iran’s Rouhani: US will pay a high cost if Trump scraps nuclear deal 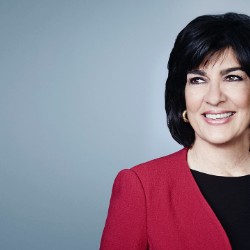 By Christiane Amanpour, Chief International Correspondent and Hilary Clarke, CNN
Updated 11:08 PM EDT, Mon September 18, 2017
iran nuclear deal trump us will pay rouhani sot _00000000.jpg
Now playing
00:52
Iran warns US about scrapping nuclear deal
PHOTO: ATTA KENARE/AFP/AFP/Getty Images
Iranian women chant slogans during an anti-US demonstration outside the former US embassy headquarters in the capital Tehran on May 9, 2018. - Iranians reacted with a mix of sadness, resignation and defiance on May 9 to US President Donald Trump's withdrawal from the nuclear deal, with sharp divisions among officials on how best to respond. For many, Trump's decision on Tuesday to pull out of the landmark nuclear deal marked the final death knell for the hope created when it was signed in 2015 that Iran might finally escape decades of isolation and US hostility. (Photo by ATTA KENARE / AFP) (Photo credit should read ATTA KENARE/AFP/Getty Images)
Now playing
01:39
How will US pulling out of deal impact Iranians?
PHOTO: CNN
Now playing
01:07
Trump announces withdrawal from Iran deal
PHOTO: Photo Illustration: Getty/Shutterstock/CNNMoney
Now playing
01:55
Breaking down Trump's decision to leave the Iran deal
PHOTO: AP
Iranian lawmakers burn two pieces of papers representing the U.S. flag and the nuclear deal as they chant slogans against the U.S. at the parliament in Tehran, Iran, Wednesday, May 9, 2018. Iranian lawmakers have set a paper U.S. flag ablaze at parliament after President Donald Trump's nuclear deal pullout, shouting, "Death to America!". President Donald Trump withdrew the U.S. from the deal on Tuesday and restored harsh sanctions against Iran. (AP Photo)
Now playing
00:38
Watch: US flag set alight in Iran's parliament
France Nuclear Fallout_00005926.jpg
Now playing
02:59
Renewed Iran sanctions may hurt France as well
PHOTO: Win McNamee/Getty Images North America/Getty Images
U.S. President Donald Trump answers questions from the press during a meeting with former U.S. Secretary of State Henry Kissinger in the Oval Office October 10, 2017 in Washington, DC. Trump answered a range of questions during the portion of the meeting that was open to the press, including queries on Secretary of State Rex Tillerson.
Now playing
02:04
Years of Trump panning the Iran deal
PHOTO: Getty Images/Getty Images Europe/Getty Images
ISFAHAN, IRAN - MARCH 30: A worker walks inside of an uranium conversion facility March 30, 2005 just outside the city of Isfahan, about 254 miles (410 kilometers), south of capital Tehran, Iran. The cities of Isfahan and Natanz in central Iran are home to the heart of Iran's nuclear program. The facility in Isfahan makes hexaflouride gas, which is then enriched by feeding it into centrifuges at a facility in Natanz, Iran. Iran's President Mohammad Khatami and the head of Iran's Atomic Energy Organisation Gholamreza Aghazadeh is scheduled to visit the facilities. (Photo by Getty Images)
Now playing
01:20
Explaining the Iran nuclear deal
PHOTO: CNN
Now playing
00:47
John Kerry wants Trump to stay in Iran deal
Now playing
01:47
Rouhani: Pity if rogue newcomers end the deal
PHOTO: Evan Vucci/AP
President Donald Trump delivers a statement on the Iran nuclear deal from the Diplomatic Reception Room of the White House, Tuesday, May 8, 2018, in Washington. (AP Photo/Evan Vucci)
Now playing
02:42
Trump: US withdrawing from Iran deal
PHOTO: Alex Wong/Getty Images North America/Getty Images
WASHINGTON, DC - AUGUST 04: Former CIA Director Gen. Michael Hayden (Ret.) testifies during a hearing before Senate Armed Services Committee August 4, 2015 on Capitol Hill in Washington, DC. The committee held a hearing on the Joint Comprehensive Plan of Action (JCPOA) and the military balance in the Middle East. (Photo by Alex Wong/Getty Images)
Now playing
02:12
Ex-CIA chief: Netanyahu's findings are old news
PHOTO: Sebastian Scheiner/AP
Israeli Prime Minister Benjamin Netanyahu presents material on Iranian nuclear weapons development during a press conference in Tel Aviv, Monday, April 30 2018. Netanyahu says his government has obtained "half a ton" of secret Iranian documents proving the Tehran government once had a nuclear weapons program. Calling it a "great intelligence achievement," Netanyahu said Monday that the documents show that Iran lied about its nuclear ambitions before signing a 2015 deal with world powers. (AP Photo/Sebastian Scheiner)
Now playing
02:15
Responses in wake of Netanyahu's Iran speech
PHOTO: CNN
Josh Rogin 01
Now playing
01:44
Takeaways from Netanyahu's Iran remarks
PHOTO: pool
Now playing
01:31
Trump: Iran under control of fanatical regime
nikki haley us evidence against iran weapons sot _00013621.jpg
Now playing
02:00
Haley: This is concrete evidence against Iran
(CNN) —

Iranian President Hassan Rouhani said Monday that America will pay a “high cost” if US President Donald Trump makes good on his threats to scrap the Iran nuclear deal.

Speaking in an exclusive interview with CNN in New York, Rouhani said: “Exiting such an agreement would carry a high cost for the United States of America, and I do not believe Americans would be willing to pay such a high cost for something that will be useless for them.”

Rouhani said such an action by the Trump administration “will yield no results for the United States but at the same time it will generally decrease and cut away and chip away at international trust placed in the Unites States of America.”

The US extended sanctions relief for Iran last week as part of the 2015 nuclear agreement, which Trump has described as “the worst deal ever.”

PHOTO: Olivier Douliery - Pool/Getty Images
U.S President Donald Trump looks on during a meeting with South Korean President Moon Jae-in in the Oval Office of the White House on June 30, 2017 in Washington, DC.

It was mainly a procedural move, but it was significant, as re-imposing nuclear-related sanctions could lead to Iran ending its compliance with the deal and reverting back to rapid uranium enrichment – something Iran has threatened to do if the US reneges on its end of this bargain.

The next major deadline comes in October, when Trump will decide whether to certify that Iran is complying with the agreement, known as the Joint Comprehensive Plan of Action (JCPOA). If he does not, Congress has 60 days to decide whether to reimpose sanctions waived under the deal.

Rouhani said Iran was ready to respond to the possibility of Trump walking away from the agreement.

“Given that Mr. Trump’s actions and reactions and policies are somewhat unpredictable, we have thought long and hard about our reactions,” he said.

He said any riposte from Iran would come “quite swiftly” and “probably within a week,” adding that “if the US wants to increase the tensions it will see the reaction from Iran.”

What's in the Iran nuclear deal?

Stockpiles & centrifuges: The deal has curbed Iran's nuclear program, reducing its stockpiles of enriched uranium by 97 percent and cutting the number of its centrifuges by two-thirds.

Uranium enrichment: It still allows Iran to continue enrichment -- enough for civil use to power parts of the country, but not enough to build a nuclear bomb.

Inspections: Iran is required to provide inspectors from the UN's nuclear watchdog access to monitor its declared nuclear facilities.

Compliance: Every 90 days, the US President must certify to Congress that Iran is keeping up its end of the deal. If the President does not certify the agreement, Congress has a statutory 60-day period to decide whether to reimpose sanctions.

Rouhani, who was reelected by a popular vote to a second presidential term earlier this year, was a key architect of the 2015 nuclear agreement with the United States, the European Union and other partners.

The deal led to the lifting of most international sanctions against Iran in return for curbs on its nuclear program.

The agreement is expected to feature high on the agenda at this week’s UN General Assembly in New York, which both Rouhani and Trump are attending.

On Thursday, Trump again attacked the agreement, calling it “one of the worst deals I have ever seen.”

“You’ll see what I’m going to be doing very shortly in October,” Trump told reporters aboard Air Force One. “But I will say this, the Iran deal is one of the worst deals I’ve ever seen, certainly at a minimum the spirit of the deal is just atrociously kept. But the Iran deal is not a fair deal to this country. It’s a deal that should have never ever been made. And you’ll see what we’re doing in a couple of weeks.”

Trump promised the US is “not going to stand for what they (Iran) are doing,” arguing Iran has “violated so many different elements” of the deal.

He promised his upcoming action on the deal in October would be “very evident.”

In the meantime, the International Atomic Energy Agency, the UN’s nuclear watchdog, says Iran is complying with its commitments under the deal, including inspections.

Rouhani warned of the diplomatic precedent that would be set by pulling out of the Iran agreement, especially with regard to North Korea.

“But keep in mind please that if the United States wishes to withdraw from the JCPOA, why would the North Koreans waste their time in order to sit around the table of dialogue with the United States, because they would think perhaps after years of talks and a potential agreement the next US administration could step over or pull out of the agreement.”

On the war in Syria, Rouhani stopped short of declaring an outright victory for the Syrian government, which Iran has supported on the ground, but described Tehran’s intervention as a success.

“Our actions were successful and today we are witnessing the final stages of the defeat of ISIS” he said, before calling for eventual elections in Syria.

“The future of Syria will be determined by talks and ultimately the opposition must reach an agreement with the government and the will of people would be the ballot box should ultimately determine what happens,” Rouhani told CNN.

CNN also asked Rouhani about Iran’s position regarding the current crisis in Myanmar, where the government has been accused by the UN of ethnically cleansing Rohingya Muslims. The Myanmar government has denied this, claiming security forces are carrying out counter attacks against “brutal acts of terrorism.”

Rouhani said that Myanmar should be condemned and that aid should be forwarded to Bangladesh, where hundreds of thousands of Rohingya refugees have fled in recent weeks.

He also said he shared concerns that ISIS and al Qaeda fighters in Syria and Iraq could move across to Bangladesh and Myanmar to exploit the Rohingya crisis.

CNN also asked about foreign nationals and dual citizens detained in Iranian jails, including Nazanin Zaghari-Ratcliffe, a British-Iranian dual citizen who was arrested in 2016 and sentenced to five years’ imprisonment, and the Iranian-American dual citizens Siamak Namazi and his father Baquer Namazi, who have been imprisoned since 2015 and 2016, respectively, and were each sentenced to 10 years.

A UN human rights panel has ruled that the Namazis are being held illegally and should be released, according to the American lawyer for the Namazis. The opinion of the United Nations Working Group on Arbitrary Detention has not been publicly released yet.

Rouhani said in an aside that he had his own views on the subject of detained foreigners and dual citizens, but that he was obliged to follow the Iranian constitution which had enshrined the separation of powers between the executive and the judiciary.

This story and its headline have been updated to reflect the accurate translation of Rouhani’s remarks.