According to writer-director Darren Aronofsky, “Mother!” bubbled out as a response to the madness of the times. That burst of inspiration, however, translates into self-indulgence, as this gothic thriller starring Jennifer Lawrence descends from intrigue into irritation and eventually ennui.

Creepy and surreal, the movie will have its admirers, particularly in its rumination about the tortured nature of producing art and loving an artist, as well as its underlying commentary about relationships in general. (Some have dubbed the movie a “relationship thriller,” which mostly sounds like the marketing department throwing up its hands in surrender.)

At the same time, “Mother!’s” most provocative, bordering on repellant elements don’t have the impact they’re intended to deliver, as the last third careens off the rails, making the two-hour film feel, finally, like a long, tedious sit.

Those who go into “Mother!” with expectations of a conventional thriller, or a psychological one, should be forewarned. Even comparisons to horror movies by directors known for their ambition, like “Rosemary’s Baby” or “The Shining,” don’t quite cut it, as Aronofsky – having directed “Black Swan” and “The Wrestler” – has essentially cast bankable stars in what feels like an experimental indie film.

Given the confined space the movie also owes a debt to theater, as the story claustrophobically unfolds in a remote, over-sized house with creaky stairs. Lawrence’s unnamed woman is determined to remake the home into “a paradise” for her husband (Javier Bardem), a blocked writer/poet to whom she defers. 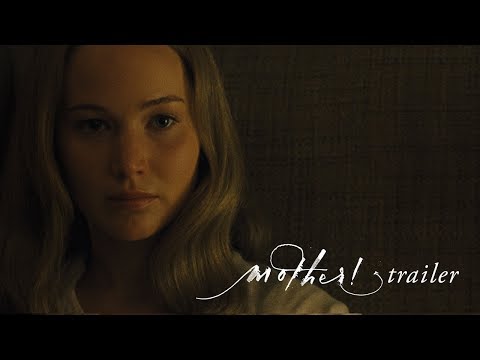 Their reverie is shaken when a man (Ed Harris) stumbles into their midst, followed in short order by his wife (Michelle Pfeiffer). While her husband seemingly welcomes the intrusion of these peculiar strangers, Lawrence’s character is increasingly unsettled by it, which, along with her poking around in the basement, is a mere harbinger of what’s to come.

The movie begins with some interesting relationship dynamics, from the commented-upon age gap between the central couple to the sacrifices made and slights endured to mollify a partner so committed to and protective of his craft.

Around the midway point, though, there’s a percolating sense that the movie’s payoff had better be worth the journey, and it simply isn’t. Nor can Lawrence – gamely conveying alternating bouts of confusion and pain – ultimately make much out of a character written as such a blank slate.

As noted, Aronofsky has somewhat given the game away in his comments about the movie – citing a “primordial soup of angst and helplessness” that “poured out” of him, giving birth to the concept. Having gotten all that out of his system, it’s possible to hope that he feels purged without recommending “Mother!” as an addition to anyone’s movie-going diet.