What you need to know about Hurricane Irma

Where it is now

One of the strongest storms to ever hit the US, Irma weakened to a Category 1 overnight. But it’s still dangerous. Early this morning, the eye of the storm was about 60 miles north of Tampa, with sustained winds of about 75 mph and wind gusts up to 90 mph. This means, Most of the state will continue to feel Irma’s effects – windy conditions and torrential downpours.

Where it is going

Irma’s moving northwest through the western part of the Florida peninsula and into the southeastern US. So, later today, parts of Georgia and Alabama will be battered by Irma’s strong winds and heavy rains. Irma will weaken to a tropical storm this morning and to a tropical depression by this afternoon. Many schools in Alabama and Georgia have already canceled classes today and tomorrow.

Where it has been

After wreaking havoc in the Caribbean (and killing at least 26 people there), Irma slammed into the Florida Keys as a monstrous Category 4 hurricane. A few hours later Irma made a second landfall at Marco Island, before the storm barreled its way through Tampa.

What it has wrought

Streets in Miami turned into raging rivers as floodwaters surged in the city, and the airport is closed because of “significant water damage.” Cranes collapsed. There are boil water orders in parts of Broward County, and Miami-Dade School are closed until further notice.

A pair of tornadoes touched down in Brevard County – and tornadoes are among a hurricane’s potent threats. Venice shut down its water plant. Even Disney World was forced to close, for only the sixth time in its 45-year history.

This is the first time the US has been hit with two Category 4 storms in the same year, and Harvey and Irma will exact a huge financial toll. One company estimates Irma will cause $50 billion worth of losses in the US.

We’re getting some reports of deaths, but it’s just too early right now to know what the final toll from Irma will be in the US.

How we have responded

First responders are only now getting out to assess the damage Irma brought to Florida. There are rescues underway along the intercoastal waterway in Daytona Beach, with responders plucking people out of apartment buildings. In St. Petersburg, rescuers watched helplessly as  911 calls piled up because it was just too windy and too dangerous for them to be outside.

Cops in Miami are reminding people that just because the storm has passed, the danger isn’t over. They’re also arresting people for looting – nearly 30 arrests so far.

US warships began relief efforts last week, and now cruise ships are getting involved. Royal Caribbean is sending two ships to St. Thomas and St. Maarten, while Norwegian Cruise Line is sending a ship to St. Thomas to pick up about 2,000 people who couldn’t get off the island before the storm.

Farther north in Atlanta, informal networks of residents have taken in Irma evacuees, and one group even threw a surprise birthday party for a 6-year-old girl.

This flock of flamingos in Tampa Bay were a part of the 12,000 animals Busch Gardens moved to safety because of Irma.

SINGLE FILE, EVERYONE! Flamingos being ushered to safety at @BuschGardens, along with other animals Stay safe, everyone! #HurricaneIrma pic.twitter.com/d7ozWBndKH

Insulation rained down in Miami because of Irma.

Looks like #Irma made it snow in #Miami. Actually it's insulation from a high rise under construction. Photo taken by @CityofMiamiFire pic.twitter.com/wgM78Yq8j8

All the records Irma’s already broken

Here are some other startling stats about the fury and impact of Hurricane Irma.

Mexico: At least 90 people are now confirmed dead in the quake that struck off Mexico’s southern coast, the most powerful to hit the country in a century.

Myanmar: Myanmar’s government has rejected a proposed ceasefire by militants, saying they don’t “negotiate with terrorists.” This, as more than a quarter of a million Rohingya refugees flooded into Bangladesh in just two weeks, fleeing violence in the country’s Rakhine state.

North Korea:  The UN Security Council is expected to impose new sanctions against North Korea today. If it happens, Pyongyang - never once to mince words - is promising the US “the greatest pain and suffering it had ever gone through in its entire history.”

US:  Attorney General Jeff Sessions has floated the idea of giving polygraph tests to National Security Council staff to figure out who’s leaking classified information to the media, a source says. 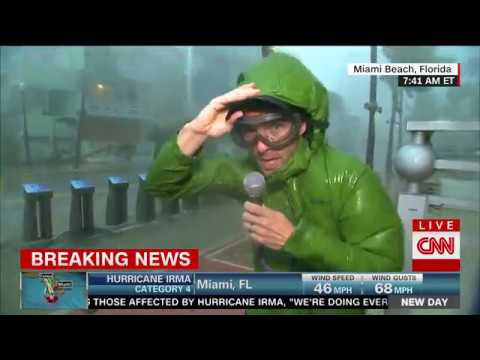 What’s it like to report from the middle of a hurricane? CNN meteorologist Derek Van Dam says it’s like being hit by a blast from a jet engine.  (Click to view)