Irma threatens birthday for 3-year old with leukemia, until nurses step in

By Elizabeth Cohen and Senior Medical Correspondent
Updated 12:10 PM EDT, Mon September 11, 2017
Ad Feedback
Photos: Irma interrupts birthday party for little girl with leukemia
Johns Hopkins All Children's Hospital
Willow Stine was diagnosed with leukemia on Friday and turned 3 on Sunday. Most of her family, including her sister and dad, couldn't get to the hospital to celebrate because of Hurricane Irma.
Kelly Boyd, a child life specialist, and other hospital staff made a birthday party for Willow, cake and all.

Willow turned 3 on Sunday, while Irma made landfall in Florida

Willow was diagnosed with leukemia on Friday

Willow was diagnosed with leukemia on Friday, just two days before the storm hit, and is now with her mother at Johns Hopkins All Children’s Hospital here preparing for chemotherapy.

Her mother had nothing for her birthday on Sunday: no presents, no cake, no decorations.

An American flag is torn as Hurricane Irma passes through Naples, Florida on September 10.
David Goldman/AP

She was also missing another key ingredient for a birthday party: friends and family. It was unsafe for them to make the journey from their home in Wesley Chapel, more than 40 miles north of the hospital.

“I was like, I don’t know how much more I can take,” said Willow’s mother, Jennifer Stine. “My baby’s turning 3 and has cancer and on top of that my 4-year old daughter and husband are an hour and a half away in a hurricane. I’m just trying to process all this.”

That’s when hospital staff stepped in.

Raiding a stash of brand new toys at the hospital, nurses and specialists working Willow wrapped up gifts, including a doll, a game, books, Play-Doh and a bubble machine.

“I always wanted this!” Willow repeatedly exclaimed in a video after opening each gift. 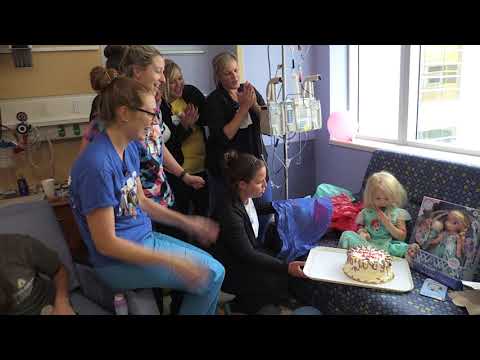 When they presented Willow with a cake, she immediately took her hand that wasn’t hindered by an IV line and scooped up some icing.

Her mother is seen on the video quietly crying as the staff sang “Happy Birthday” to her daughter. “The nurses were amazing. They’re so wonderful,” Stine said. “She got to be a toddler again.”

On Thursday afternoon, Stine received a call from the pediatrician’s office asking her to re-schedule Willow’s 3-year old check up, which was supposed to be Monday. They asked her to come in later in the week after the storm had passed.

Stine hesitated. Willow hadn’t seemed quite like herself lately, and she was very pale. She insisted on bringing Willow in the next day.

TOPSHOT - Two men look for belongings in the rubbles of their restaurant on September 10, 2017 on a beach in Orient Bay on the French Carribean island of Saint-Martin after it was devastated by Irma hurricane. People on the islands of Saint Martin and Saint Barts turn to the colossal task of rebuilding after Hurricane Irma laid waste to their infrastructure and shattered their lives. / AFP PHOTO / Martin BUREAU (Photo credit should read MARTIN BUREAU/AFP/Getty Images)
MARTIN BUREAU/AFP/Getty Images

“My mommy intuition told me I couldn’t wait,” Stine said.

The pediatrician, who noticed a worrisome bruise on Willow’s leg, sent her to a local emergency room. Doctors there sent Willow by ambulance to All Children’s, where she was diagnosed with acute lymphocytic leukemia.

“It’s the most heartbreaking, scariest, most knee-buckling worst news you can receive,” Stein said.

She said Willow has been a trooper.

Although she doesn’t like getting stuck with needles, she enjoys caring for her mother and stuffed animals. She puts a toy stethoscope – another gift from the hospital – on her mother’s chest and tells her to breathe in and breathe out. She takes her stuffed animals’ blood pressure with a toy cuff.

She’s smart, her mother said. When a nurse came to tell her she’d be getting “an arm hug,” Willow replied, “no – that’s blood pressure!”

Willow is scheduled to begin chemotherapy Wednesday, and will be in the hospital for at least another week after that.

In the meantime, her mother feels relieved that Irma weakened as it traveled up Florida’s west coast toward her older daughter and husband.

Irma’s deflated path helps her stay resolute for her daughter. “You have to pull it together and be strong for your kids and be their rock, so that’s what we’re doing,” she said.