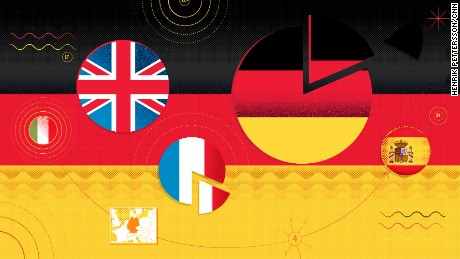 How Germany stacks up against its European neighbors

(CNN)When German voters head to the polls on September 24, they'll have to choose from a record 42 parties, but there are just two realistic candidates for Chancellor -- incumbent Angela Merkel, of the conservative Christian Democratic Union (CDU), and her Social Democratic Party (SPD) rival, Martin Schulz.

Immigration is still a top concern for many German voters after more than a million asylum seekers entered the country over the past two years, but other issues such as income inequality, climate change and an aging population are equally divisive.
Here's how Germany stacks up against its European neighbors on these issues, and what Merkel and Schulz plan to do about them.

At 4%, Germany has a very low rate of unemployment. And it's been falling fairly consistently -- from a high of 11.5% -- since 2005.
Read More
But although the number of full-time jobs has risen, there's been a bigger increase in the number of part-time and low-paid jobs. According to the Federal Employment Office, 4.7 million Germans rely solely on so-called "mini-jobs," which tend to be lower paying and insecure.
Schulz has promised to crack down on precarious forms of employment, pledging to offer workers a way into more secure jobs.
Merkel has herself hired several employees from her own government office to work as "mini-jobbers" on her election campaign -- for which she has been widely criticized -- but wants to see workers in these jobs benefit from the same wage increases as regular employees.
When asked about the hirings at a news conference, she said she saw no problem with employing people on these contracts.
Although Germans earn more on average than British, French, Spanish and Italian workers, incomes have stagnated over the past decade and are now slightly lower than in 2008.
Between 2008 and 2015, the number of people at risk of poverty rose nearly 10%, leaving one in six Germans at risk.
Tackling in-work poverty is a key part of Schulz's campaign.
"Whoever believes that good work deserves fair pay must vote SPD," he said at a recent rally.
The CDU manifesto says that "everyone should be able to afford to live from what they earn," but Merkel herself has said little on the issue, choosing to focus primarily on the country's low unemployment rate.
Figures show that incomes are a little more equal in Germany than in many of its European neighbors. But income inequality has hardly budged over the last decade.
It's a key concern for German voters and a central topic in the election campaign, particularly among Germany's left-wing parties.
"Zeit für mehr Gerechtigkeit" ("time for more fairness/justice") is Schulz's primary campaign slogan and a staple in his speeches.
Asked about social inequality in a live YouTube interview in August, Merkel spoke about employment figures and her government's success in raising the minimum wage.
RELATED: Germany's economic strength masks rising inequality

Although Germany tops the list for asylum applications this year, the number is a lot lower than in 2015-2016, when the country received more than 1.2 million applications.
The presence of so many asylum seekers has pushed the number of foreigners in Germany to a record 18.6 million. Around half of Germans say they are worried about the integration of refugees and about immigration more broadly.
Merkel has defended her 2015 "open door" policy while insisting that the events of that year must not be repeated.
"We want the number of refugees arriving in Germany to be permanently low," her party's manifesto reads.
Schulz is calling for all European countries to take their fair share of refugees. "We stand for a humanitarian refugee policy," the manifesto says.
RELATED: Through Germany's open door: What life is really like for refugees

Germany climbed eight places on the Global Terrorism Index to 41 after six people were killed by terror attacks in 2015 -- the country's first terror-related deaths since 2007. Further attacks in 2016 killed 22 people and injured many more.
The attacks led to calls for stricter immigration controls and increased support for the anti-immigrant party Alternative for Germany.
The same year saw more than 3,500 attacks on refugees and refugee hostels, leaving 560 people injured including 43 children, according to a government document.
Both Merkel and Schulz have pledged to put 15,000 more police officers on Germany's streets and to continue investing in anti-terrorism measures.
The SPD has also promised to tackle the growing problem of right-wing extremism.

Germany emits more CO2 per capita than many of its neighbors, including Austria, Denmark, Italy and Spain.
It's an issue that concerns the majority of voters. A recent survey showed that more Germans are worried about climate change than about war or terror attacks.
Germany also looks likely to miss its 2020 target for reducing emission levels, which have barely changed since 2009.