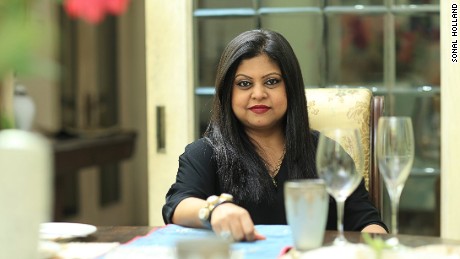 Mumbai (CNN)India guzzles more whisky than any country in the world.

Demand for Scotch whisky alone grew by 41% by volume there last year, according to the Scotch Whisky Association.
But wine ... well, Indians haven't really acquired a taste for it yet.
Sonal Holland is determined to change that.
In 2016, Mumbai-based Holland, now 44, became India's first -- and still only -- person to hold the coveted Master of Wine (MW) qualification.
Read More
Established in 1953 by The Institute of Masters of Wine in the United Kingdom, it is the most prestigious professional standard in the industry and requires rigorous preparation.
Only 355 others in the world have qualified.
Sonal Holland, India's first Master of Wine.
MWs are often asked to judge wine competitions, lecture on wine courses and advise governments, hotels and airlines on their wine selections.
"It is a proud thing for India to have a Master of Wine," Subhash Arora, president of the New Delhi-based Indian Wine Academy, a private wine consultancy, tells CNN.
"Even many countries in Europe do not have one, so it is a great achievement."

In 2006, Holland was bored with her corporate job at a recruitment company in Mumbai.
Her husband Andrew Holland, a British hedge fund manager, one night suggested that she should study wine. "The wine industry in India is just picking up. You could become a wine professional," she remembers him saying.
Holland had always enjoyed wine, and been interested in how it formed an integral part of various cultures. But she had never thought about studying wine formally.
"I said, 'Yeah, good idea!' My over confidence took over," she recalls.
It turned out to be a defining moment.
India is neither known as a wine consuming or producing country. Only a tiny number of its 1.2 billion people have tasted wine.
But with India's burgeoning middle class growing rapidly, there are millions of people waiting to be introduced to wine.
In 2008, Holland embarked on a two-year diploma at the London-based Wine and Spirit Education Trust. For Holland, it meant constant travel between London and Mumbai, juggling coursework with family life and a significant personal investment. The course alone cost more than $4,000.
Immediately after passing, she set her eyes on becoming a Master of Wine.

The Sula Vineyard in Nashik, around 103 miles from Mumbai.
To become an MW, Holland had to pass a rigorous exam. The five 3-hour papers on viticulture, vinification and bottling that form the theory component, she says, were not the hardest part.
That was the wine tasting.
The practical component requires a candidate to blind taste 36 wines over three days, assessing them for origin, quality, winemaking and style.
Preparing for this was hard, explains Holland, because India does not have access to a wide range of wines. And the ones that are available have often been damaged in transit or not properly stored, which alters their taste.
"I had to rely on all my tasting experience overseas. I had to travel like a mad woman to vineyards to understand their practice, learn how wine makers do different things in different parts of the world."
But Holland was unstoppable, even though it meant making sacrifices.
One of her exams, for example, fell on her daughter's fifth birthday.
"I was watching her cut the cake via Skype. It was 3am in London and I was also thinking, 'I need to sleep because I have an exam and need to be fresh.'
"I thought I was a horrible mother. If I had analyzed all this, I would have crumbled, I would have (gone) back."
Instead, she persisted and after six years' hard work became India's first MW.

Sula Vineyard in Nashik.
"(The MW) is very prestigious in wine circles and a challenging qualification to achieve," says Eddie McDougall, the columnist and TV personality behind The Flying Winemaker, a wine events and marketing company in Asia with a Discovery Channel show.
"It takes a lot of study, personal resources and time in the trade to achieve."
The title sits heavily on Holland's shoulders.
"It is not good enough to become a Master of Wine and then say: 'I am done.' It is actually where your journey begins," she says.
Holland's chosen path is to educate people about wine in her home country.
"Wherever I go, I carry the Indian flag. I must now do things that will help the Indian industry," Holland says. "It is about growing the consumer market. India should become relevant."