SkateQilya offers a skateboarding program in the West Bank

The non-profit provides free camp for kids each summer

The Palestinian skateboard scene is small but growing

A small zoo in the Palestinian territories is an unlikely place to find a budding community of skateboarders.

But dozens of youngsters rolled up to a wooden ramp in Qalqilya Zoo last month – not far from enclosures containing lions, peacocks and monkeys – to learn the tricks of the skater trade.

The children were taking part in a free, three-week skating program run by SkateQilya, a non-profit that uses the sport to reach out to young people across the West Bank.

“The kids learn very fast because they are in love with skateboarding,” says 17-year-old Faiza Batta, who traveled to the summer camp from the nearby village of Hajjah in 2016 before returning this year to help out the organizers.

The experience, she says, has inspired many attendees to dream of becoming a professional skater and showcasing their skills abroad.

“Some of them say it is a way to fly .. (to) use the skateboard as a passport for traveling,” Batta says.

Getting kids on board

Othman and Abel have been making a feature film about the nascent Palestinian skateboarding scene since 2011, which they hope to send to festivals next year.

They met Reed when he came to Qalqilya to help build its skate ramp in 2013, after the local municipality donated land for the project.

As well as teaching skateboarding techniques, the camp aims to nurture community building, leadership and creative skills. Attendees have been taught, for example, how to use video cameras and take photos.

“We envision expanding (the curriculum) to include more entrepreneurial skills, too,” Abel says.

“My ultimate goal would be to start getting coding programs in here. All these things are creative like skateboarding, but are also skills these kids can pursue in careers and potentially for income.”

Located in the northwest region of the West Bank, Qalqilya is a town of more than 40,000 surrounded by Israel’s imposing security wall.

According to Othman, there are few things for kids in Qalqilya to do.

Land is sparse and there are no municipal parks, one reason why the skatepark was built in the zoo.

But even with access to this space, setting up the summer camp has been far from simple.

Othman says the Israeli army can cause disruption by setting up checkpoints and making incursions into Palestinian towns and villages.

Israel has long stated such actions are necessary for security, but Othman says they can make it difficult for children to reach the camp.

“You never know when the checkpoint is going to start and going to end,” he says, adding that their program is non-political.

The challenges don’t end there. Even obtaining the right equipment can be hard, as there are no skateboard shops in the West Bank.

But that can be complicated, too. “Last year our equipment was held for a short period but we eventually got it,” Reed says.

Tom Bird, editor of “Roll With The Punches,” a new magazine dedicated to skateboarding in the Palestinian territories, says there are two skate parks in the West Bank.

These were built by non-profits skate-aid and SkatePal in the towns of Bethlehem and Asira Al-Shamaliya, respectively, and differ from the Qalqilya Zoo ramp in that they contain a number of dips and obstacles over a larger area.

Another skate park is planned in the village of Jayyous, thanks to a joint project between SkateQilya and SkatePal – with whom Bird has volunteered in the past.

At the new park, Othman says SkateQilya will work with a local school to offer skateboard classes as part of its physical education curriculum. 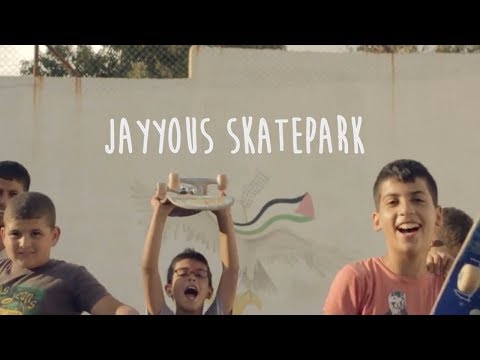 Bird says there were only a handful of people skateboarding until groups like SkatePal and SkateQilya showed up.

“(Now) in terms of the talent level, some of the children are progressing at a really rapid rate … I think part of that is because there aren’t really too many other distractions,” Bird says.

“There are some people who you can tell are very, very dedicated to skateboarding and it’s come to define what they do and who they are.”

For Othman, the fact that the SkateQilya program is open to both genders is extremely important.

“Having boys and girls together in a summer camp in the West Bank is something that’s not normal,” Othman says.

Many West Bank communities remain socially conservative, says Abel, with boys and girls generally not playing sports or socializing together

But, he says, SkateQilya has worked to change that, with the support of the children’s parents.

A young skateboarder takes on the ramp at the SkateQilya camp in the West Bank.
Courtesy Adam Abel

“We had 14 and 15-year-old girls and boys holding hands as they go down a skate ramp,” Abel explains. “This is a major, major thing here in Qalqilya.”

Bird says some critics argue that children in the West Bank need more than skateboarding facilities to overcome the challenges they face.

But he believes skateboarding can provide some important lessons.

“A lot of life skills and qualities that I use in adult life, I got skateboarding as a youngster,” he says.

“Persistence would be a big one. I’m persistent with a lot of things. I think much of that comes through skateboarding. You know, not leaving a skate park until you get a trick that you’ve been trying for hours and hours.”

In a place like the West Bank, persistence is perhaps not a quality to be underestimated.