Marvel is going to test its powers this weekend, asking committed fans to pony up cash to see the premiere of “Inhumans” in Imax theaters, a TV series that they’ll be able to catch on ABC beginning September 29.

It’s an interesting stunt, especially with the lines between film and TV blurring. But an early sampling of the program suggests the studio might have overreached in asking this relatively obscure comics title to bridge the divide.

“Inhumans” essentially represents the first true superhero show that Marvel has produced for ABC, with more super-powered characters than “Agents of SHIELD,” while featuring a more colorful and lighter tone than the company’s gritty Netflix dramas – building up to “The Defenders,” uniting the characters of Daredevil, Jessica Jones, Luke Cage and Iron Fist.

Still, previewing of the first hour found little material of a scope that demands to be seen on an Imax screen. “Inhumans’” fidelity to the comics – and the more absurd-sounding flourishes that entails, like a giant dog with the power to teleport his masters – could also make it a tough sell beyond that loyal core.

While Marvel stressed that the pilot wasn’t finished, a preview was coolly received by TV critics earlier this summer. One journalist tweeted that the character of Black Bolt (Anson Mount), who must remain mute, was spared from spouting the same dialogue as his co-stars. 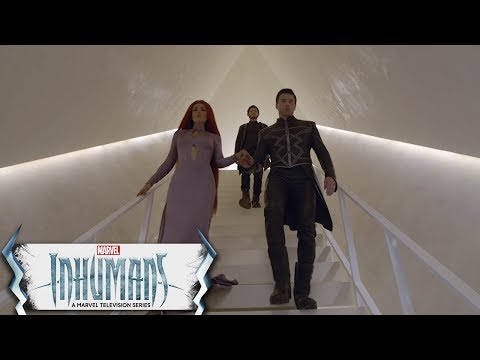 The plot is faithful to the comics, which focus on an extraordinary race of people, the Inhumans, who have taken refuge on a moon-base city known as Attilan. They are led by Black Bolt, who, among other powers, will unleash devastation if he utters a word.

Black Bolt is surrounded by a royal family that includes his queen Medusa (Serinda Swan), whose long hair can be wielded as a weapon. He faces a challenge to his leadership from his brother, Maximus (“Game of Thrones” alum Iwan Rheon), who, citing the threat posed by humans, argues, “We need to strike first.”

At the critics event, Marvel Television chief Jeph Loeb downplayed the significance of “Inhumans” in terms of impacting plans to bring its library to TV. “What’s important to us is that every show has a very different feel to it,” he said.

Marvel has enjoyed so much success in the movie business that its TV misfires have been somewhat obscured. If the eight-episode “Inhumans” fails, it could shine on a spotlight on the fact Marvel has generally lagged behind Warner Bros.-owned DC Entertainment (like CNN, a unit of Time Warner), with its comics rival producing “The Flash,” “Arrow” and “Supergirl” for the CW network.

“Sooner or later, the humans are going to find us up here,” Maximus warns his brethren in the pilot. Based on the lingering questions regarding whether “Inhumans” can successfully navigate the Imax-to-TV leap, that might be a pretty optimistic scenario.