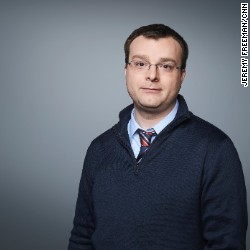 Under a light Virginia rain, Allen Armentrout stood Tuesday in front of the statue of Gen. Robert E. Lee at Charlottesville’s Emancipation Park.

A Confederate flag rested on his shoulder. An assault rifle hung from the other. A pistol was holstered at his hip.

The young man, dressed as a soldier of the Confederacy, gazed reverently at the imposing bronze statue of Lee on horseback. The monument was the flashpoint for a bloody white nationalist rally that ended with the death on Saturday of counterprotester Heather Heyer. At one point Armentrout saluted it.

When reporters began to interview Armentrout, 21, three or four people walking through the park approached him. “Why are you covering him?” someone asked. “These people have ruined our town and you’re covering him.”

“If you’re giving him a platform,” one woman told reporters, “then you are complicit in the murder of Heather.”

“This is our town,” a man told Armentrout. “Your people have killed us. You tore up our town. You ruined business. This statue is coming down.”

“No, it’s not,” Armentrout responded. “The state of Virginia has a law that protects monuments like this.”

’This is not what we believe in’

What followed was a nearly hour-long confrontation that served as a stark reminder of the looming fight in southern cities still struggling with the legacy of slavery and what to do with Civil War monuments and symbols that represent heritage to some and hate to others.

“It’s the saddest thing that’s ever happened to this town,” Colin Burns, 25, one of the men yelling at Armentrout, told CNN. “I’m sitting here right now and there again is a man with an assault rifle on his back and a Confederate flag. This is not our city. This is not what we believe in.”

On Saturday, white nationalists and other right-wing groups clashed with counterprotesters over the planned removal of the Lee statue from the city park. Men carrying Confederate flags stood side by side with the Ku Klux Klan, neo-Nazis and rifle-toting militia members at a rally dubbed “Unite the Right.”

Heyer, 32, was killed when a car rammed into a crowd walking down a street. James Alex Fields Jr., a 20-year-old Ohio resident, was charged with second-degree murder in Heyer’s death.

“I hope that man serves time,” Armentrout said of Fields. “I really do.”

Armentrout told reporters he’s from North Carolina and that he loves the Lee statue. On his Facebook page, he had written that he was going to Charlottesville. “It’s time to stand,” he wrote.

He also posted video from a Durham, North Carolina, protest Monday where people toppled a Confederate statue. “Please send some defenders here!” he wrote. “Please I beg that some people go and stand up for our heritage.”

On Tuesday, Armentrout quietly walked away with a police escort as the crowd around him began to grow. People in the park shouted, “terrorist go home!” and “Tear it down.”

“The statue needs to come down today,” Burns said. “This is the most loving place in the world … This isn’t us. Those people are not our people.”

Armentrout later posted on Facebook an online story about Tuesday’s confrontation at the park. “The Lord says we should love everybody,” he wrote.

MORE: What can communities do with Confederate monuments? Here are 3 options