For more on late night comedy’s influence on culture and politics, watch CNN’s “The History of Comedy” Sundays at 10 p.m. ET/PT.

Jimmy Fallon wasn’t playing it for laughs with his monologue Monday night.

Instead Fallon, at times appearing to fight back tears, spoke from the heart about Saturday’s deadly events in Charlottesville, Virginia.

While acknowledging that “The Tonight Show” is not political, Fallon opened up about the clashes in Charlottesville between white nationalists and counterprotesters.

He said it was his “responsibility to stand up against intolerance and extremism.”

“What happened over the weekend in Charlottesville, Virginia, was just disgusting,” Fallon said. “I was watching the news like everyone else, and you’re seeing Nazi flags and torches and white supremacists and I was sick to my stomach.” 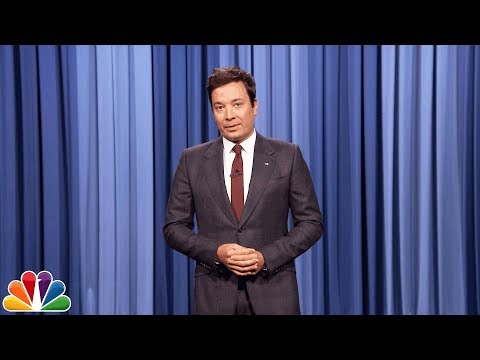 Fallon said he wondered how he would explain racism to his young daughters, who are 2 and 4, and paid tribute to Heather Heyer, who died after a car rammed into a group protesting the white nationalists.

Heather Heyer died ‘fighting for what she believed in’

He also called out the actions of President Donald Trump and his delayed response to the tragedy.

“The fact that it took the President two days to come out and clearly denounce racists and white supremacists is shameful,” Fallon said. “And I think he finally spoke out because people everywhere stood up and said something.

“It’s important for everyone, especially white people in this country, to speak out against this,” he said. “Ignoring it is just as bad as supporting it.”

Fallon was criticized last year for his light banter with then-presidential candidate Trump during an appearance on “The Tonight Show.” The late-night host was accused of not being critical enough of Trump and at one point even ran his fingers through Trump’s hair.

“They have a right to be mad,” Fallon told The New York Times in May. “If I let anyone down, it hurt my feelings that they didn’t like it. I got it.”