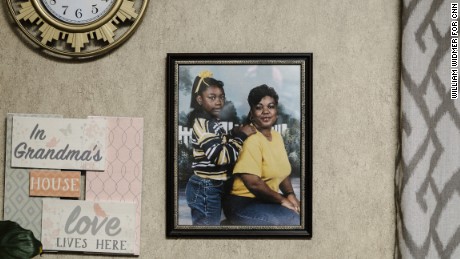 Stacy Ruffin is pictured with her mother, Carolyn. Stacy was 44 when she died.

Arcola, Louisiana (CNN)Rain pounded on the roof of the mobile home as the phone rang. The call was about Mark, Carolyn Ruffin's oldest son. He'd been hospitalized in a nearby town. The mother of four, who normally has an unflappable air about her, knew she had to rush to her boy -- no matter that a storm was brewing, the likes of which her corner of Louisiana never had seen.

This was August 12, 2016. In the next week, about 7 trillion gallons of water would fall on Louisiana, more than during Hurricane Katrina, according to meteorologist Ryan Maue. The nameless storm would shatter records, flood homes and kill 13 people.
That morning, though, Carolyn's thoughts weren't focused on the weather. They were with her son. So, at about 7 a.m., she hopped in the front seat of a friend's pickup truck.
Two people would join her. One was Alfred Waxter, the truck's owner, a close family friend visiting from Mississippi. The other was Carolyn's daughter Stacy.
At 44, Stacy Ruffin was the youngest of Carolyn's four children. Family members speak of the two as inseparable, and they mean it literally. Stacy lived with her mother in the mobile home, raising a daughter and son of her own there. She managed the deli counter at the Walmart in a neighboring town. Otherwise, she was at her mother's side, helping run errands, pay bills, check on neighbors. Stacy's eight aunties and uncles -- and their children -- all were part of her flock.
Read More
She was the family caretaker. The responsible one. The one you turned to.
So it's no surprise she went with her mother to check on her brother.
And it's no surprise that, one year after the storm, no one has filled her void.

Hundreds of miles away, the email landed in the scientists' inboxes.
It was four days later, August 16. The request: Would Karin van der Wiel, Sarah Kapnick and Gabriel Vecchi -- three researchers from the US National Oceanic and Atmospheric Administration's lab in Princeton, New Jersey -- help assess the extreme rainfall in Louisiana?
The floods in Louisiana had caught the attention of the World Weather Attribution team coordinated by Climate Central, a nonprofit that focuses on climate change science and journalism. And they wanted help.
The team would be assessing the Louisiana storm for any signs of climate change. Was this storm more likely because humans are polluting the atmosphere with heat-trapping gases? Did climate change have any likely influence on the extreme rainfall totals? Or was this a truly "natural" disaster?
Karin and Sarah considered the proposal.
The result of their inquiry would be published no matter what they found, but they had to work fast. Scientific studies typically play out over months, if not years. Could this massively complicated work be done -- and quickly enough to capture the public's attention?
The researchers knew they'd have to drop everything else to focus on this project. But they had the expertise, and they had the climate models at NOAA's Geophysical Fluid Dynamics Laboratory.
Plus, there was something about this flood.
It seemed to have the drenching power of a tropical storm, yet it stalled on land, dumping trillions of gallons of water on southeastern Louisiana, day after day. All three scientists had seen the news coverage: the floating cars, the submerged homes, the people trapped on their roofs. Many rescues were taking place by boat, since cars couldn't travel the streets in the disaster zone. A "Cajun Navy," made up of volunteers, aimed to make up some of the gaps left by authorities. Some 60,000 homes were damaged. Financial losses were estimated at $30 million.
The scientists took the news to heart. They felt for the people on the ground. Sarah and Gabriel have children of their own. What if their own family members had been put at risk?
They agreed to discuss the matter further on Skype with the Climate Central team. The three of them crowded behind a laptop webcam at the lab.
What would it take to pull this off?

'On her way home'

Stacy and Carolyn Ruffin reached St. Helena Parish Hospital safely.
Not that the drive was easy.
First, they tried to go west on Highway 10 but had to turn back. An 18-wheeler was stuck in the ankle-deep floodwater. So they tried another route: Highway 1045, a winding backcountry road that's elevated above the bogs and gullies overgrown with oak, pine and ivy.
It's not a road the Ruffins normally take, but that morning, it seemed to be the only safe route.
The family arrived to tragic news, however.
Mark already was gone.
Doctors believed that Mark Wilson suffered a heart attack on the job at an industrial site, said Brad Graves, chief of St. Helena Parish Fire District No. 4, which handles emergency services.
Carolyn Ruffin lives with her grandchildren in Arcola, Louisiana.
Carolyn wailed at the loss of her son.
Stacy phoned her children. Courtney, 23, and Corey, 13, needed to hear the news of their uncle's death from their mom. They needed her voice to console them.
"She said she loved us and she was on her way home," Courtney recalled.
The words didn't land quite right. There was something about her mother's tone.
Soon, Stacy and her mom were back in the truck, with Alfred behind the wheel. Stacy sat in the passenger's seat, her mother in the middle. Again, they headed down Highway 1045.
It wasn't safe anymore.
The flood came in a flash -- water rushing in from everywhere and nowhere all at once.
<div class="zn-body__paragraph" data-paragra