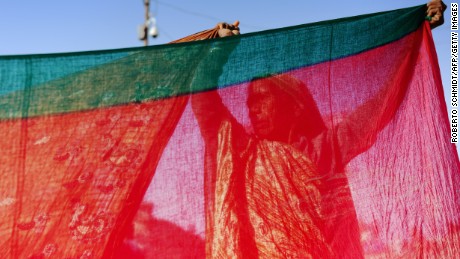 Indian women protest for their country's independence in Madras, south India, on November 6, 1945.
You've probably heard of Mahatma Gandhi, the loincloth-clad man who fronted India's fight for independence from the British. But right beside him and other male leaders, was an army of women whose trials and tribulations were every bit as compelling.

When the history of India's independence comes to be known, the sacrifices made by the women of India will occupy the foremost place.

Their fight began as early as the late 19th century, when some took to the battlefields and one queen even led an armed rebellion against the British.
They also fought a domestic battle against oppressive traditions, such as sati (the burning of a wife on her husband's funeral pyre) and child marriage. Sadly, the latter still exists today.
These women did not have it easy -- they were some of the worst victims of the traumatic events that took place in south Asia in the mid-20th century. It's reported that 75,000 women were abducted and raped during partition, the division that separated Pakistan from India, which took place at the same time as independence in August 1947.
From setting up a secret radio station to running for president when it was perceived to be a man's role, these are some of the empowering stories that are often left untold.

Read More
Mahatma Gandhi (right) with his wife, Kasturba, at Sevagram Ashram, Maharashtra, India, in January 1942.
"I learned the lesson of non-violence from my wife," Mohandas Gandhi, better known as Mahatma Gandhi, once said. Kasturba Gandhi's passive disobedience of her husband is said to have influenced the father of the nation's renowned peaceful movement.
Married when they were both just 13 years old and schooled by her husband, she became a social activist in her thirties in South Africa, and was imprisoned there for three months for protesting against the treatment of Indian immigrants in the country.
Although she was plagued with health problems, she continued her activism work when she returned to India, where she was also arrested and jailed a few more times. In 1942, she was imprisoned along with her freedom-fighting husband and other pro-independence leaders for taking part in Gandhi's Quit India movement -- an effort to encourage the British to allow India to rule itself. Her health deteriorated and she died in prison in 1944.

It is the women whose task it becomes to encourage the men, in our fight for freedom. Women have better understood the spirit of the fight than men.

Celebrating his 72nd birthday, Muhammed Ali Jinnah, Governor-General of Pakistan, strolls on the lawn of the Government House in Karachi with his sister, Fatima.
Standing firmly alongside Muhammad Ali Jinnah, the founder of Pakistan, was his sister. Fatima Jinnah is fondly remembered as Madar-i Millat, the mother of the nation.
Taking an early interest in politics and playing an active part in women's rights, she represented an advance in the status of women even before Pakistan was born, wrote author M. Reza Pirbhai. "She was English educated, a professional dentist and an unveiled social worker even before the word Pakistan was coined in the 1930s."

No nation can rise to the height of glory unless your women are side by side with you.

In 1964-5, when she was in her seventies, she even ran for president -- a role widely viewed as unacceptable for women. Although she lost, her bold move was praised by Pakistanis, wrote Pirbhai.
After India and Pakistan's independence, Jinnah also took part in refugee relief work and formed the Women's Relief Committee during the transfer of power, which evolved into the All Pakistan Women's Association.

Remember it is women who can mould the character of the youth of the nation.

Kamala Nehru, wife of India's first Prime Minister Jawaharlal Nehru, in an undated photo.
Speaking to a gathering of women in Allahabad, a city in the north of India, the wife of the country's first prime minister said: "Ours is a peaceful fight. It does not need the use of swords or lathis (sticks)." She was encouraging them to join Gandhi's Civil Disobedience Movement -- passively disobeying British rules and law.
Nehru married Jawaharlal Nehru on February 8, 1916 at the age of 17, when he was 26. She supported him in his fight for independence and played a prominent part in political processions, setting up a dispensary in her house for wounded freedom fighters and advocating women's education.
She was imprisoned on January 1, 1931 for her role in the Civil Disobedience Movement. As she was arrested, she told a reporter: "...I hope the people will keep the flag flying."
Nehru was mother to Indira Gandhi, who became the country's first female prime minister in 1966. She passed away from tuberculosis in Lausanne, Switzerland in 1936.

When my father (Jawaharlal Nehru) came into the political field, there was a certain amount of opposition from the family... I think that was the time when my mother's (Kamala Nehru) influence counted and she supported him fully.