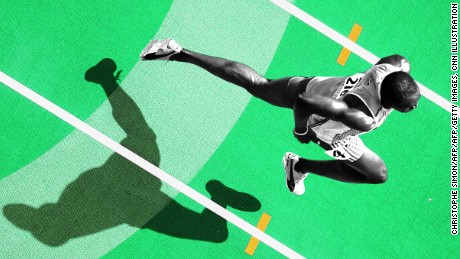 Usain Bolt in numbers -- Why the Jamaican is the greatest

(CNN)A glorious sporting career has come to an end. Usain Bolt, an eight-time Olympic champion, the fastest man in history, retired after the IAAF World Championships in London.

He is a sprinter who has broken records and left a legacy. We look into the numbers which made the 30-year-old Jamaican the greatest sprinter to have lived.
All four of the fastest 100m times in history belong to Bolt. Known in his early years as a prodigiously talented 200m runner, he burst onto the 100m scene by breaking the world record in New York (9.72) in 2008. Eleven weeks later, in Beijing, he improved on his time, clocking 9.69 as he claimed his first Olympic title.
He has dipped under 10 seconds in the sport's blue riband event 52 times -- putting him fourth on the sub-10 seconds all-time list. But Bolt, who last lost in 2013, is a man who peaks for championships. Three of his quickest times have been achieved on his way to winning either Olympic or world gold.
His times have been in decline over the years and the days of him breaking world records are clearly over. The gold-medal winning times aren't what they used to be, either -- from 9.58 in Berlin to 9.81 in Rio last year.
Read More
In winning 100m bronze in London, his final solo race, he finished in 9.95 seconds. It was only the third time he had gone under 10 seconds this year.
READ: Gatlin shocks the world
READ: Farewell Bolt, a wonder of our sporting age
Read: Take our Usain Bolt quiz
Men of Bolt's size aren't usually speed freaks. His frame is meant to be an obstacle in an event which requires explosive power out of the blocks.
"We never saw prior to Usain Bolt a sprinter who is 6'5 running the 100m," former Olympic champion Michael Johnson tells CNN Sport. "Typically, that type of athlete would not be able to get out of the blocks and get through the drive phase in the first 30m or so when short, powerful, massive pressure and power is what's required."
With his height and weight, the world record holder would not look out of place on the basketball court. He is notably taller than his rivals, as well as the greats of the past. Christian Coleman, the world silver medalist stands at 1.75m, while the new world champion Justin Gatlin is 1.85m.
<div class="el__embedded el__