Tiffany Haddish is ruling the world

She's being hailed for her comedy skills

Haddish had a tumultuous background

For more on humor, watch CNN’s “The History of Comedy” Sundays at 10 p.m. ET/PT.

It’s safe to say that if you are a comedic actress and Vanity Fair brands you “the funniest person alive right now,” things are going pretty well.

Such is the life of Tiffany Haddish, the breakout star of the movie “Girls Trip” is having a major moment.

Haddish steals virtually every scene in the comedy and nabbed the hearts of fans throughout the film’s publicity tour. (In case you missed it, Haddish told Jimmy Kimmel a must-hear story about taking a Groupon swamp tour with co-star Jada Pinkett Smith and her husband, Will Smith.) 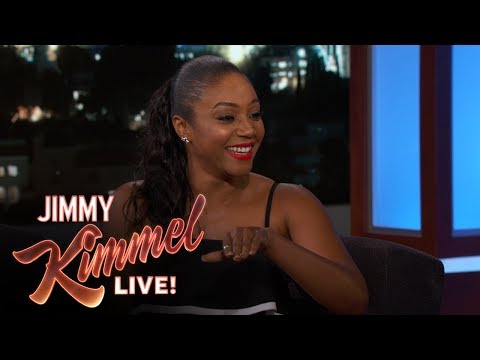 “Girls Trip” earned an estimated $30.4 million domestically in its debut weekend – double what experts had expected and topping the film’s slightly less than $20 million budget.

Part of that success is certainly attributable to Haddish, who plays the tough-as-nails Dina.

Here’s what you need to know about this new superstar:

She had to grow up quickly at an early age

When Haddish was nine, her mother was involved in a car accident that left her with a traumatic brain injury. As the eldest of five children, it was on Haddish to step up as a care giver.

“I was a full-on mom, like, right away,” Haddish said during an interview with The Breakfast Club Power 105.1 FM. “I remember the day my mom got out of the hospital, the doctor pulled me to the side and said ‘Look, she’s never going to be the person that she was and it’s time for you to grow up now. You’re going to have to help her as much as you can.’”

That included helping her mother learn how to walk, speak and read again.

Comedy helped save her

Her mother suffered from mental illness after the accident, and Haddish and her siblings eventually ended up in foster care.

Haddish was a troubled teen. She told People that a social worker gave her a choice of either going into therapy or participating in the Laugh Factory Comedy Camp.

“Going to that comedy camp and having all those men tell me, ‘You’re beautiful. You’re smart. You’re talented,’” Haddish said. “Like, for somebody to tell me that, even if they didn’t believe it or mean it, it was enough. It was enough to light a fire.”

She was inspired, she said, by “Who Framed Roger Rabbit.”

“There’s a scene in ‘Who Framed Roger Rabbit’ where the detective says ‘Why are all these people doing these nice things for you’ and [Roger Rabbit] says ‘Because I make ‘em laugh, Eddie. Make people laugh, they’ll do anything for you,’” Haddish recalled.

The actress has been on the rise for a bit.

She appeared in the faux-reality series”Real Husbands of Hollywood,” the 2016 comedy film “Keanu” and the NBC series “The Carmichael Show.”

She would like to work again with “Real Husbands” co-star Kevin Hart and Halle Berry. Haddish said people used to tell her back in the day that she resembled Berry’s crack-addicted character in “Losing Isaiah.”

“I don’t care; she was still beautiful in that movie,” Haddish told Vanity Fair. “And I used to use her name to get in clubs. I used to be like, ‘Halle Berry’s my auntie.’”

Where you’ll see her next

The woman who once tried to join the Church of Scientology to escape living in her car probably doesn’t have to worry about finding work anytime soon.

She’ll next appear in her first comedy special, “Tiffany Haddish: She Ready! From the Hood to Hollywood” on Showtime and is starring in the TBS comedy “The Last OG,” opposite Tracy Morgan.