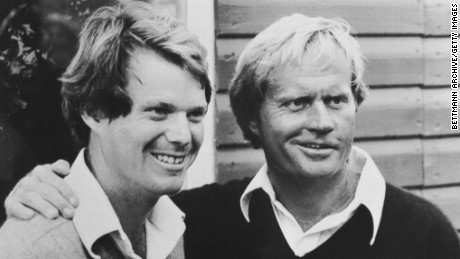 (Original Caption) Turnberry, Scotland: Jack Nicklaus (R) of the USA and Tom Watson (USA) joint leaders with a score of 203 after the 3rd round in the British Open golf championship here.

Duel in the Sun: One of the greatest contests in history

(CNN)The red-hot summer of 1977, the year a gap-toothed twenty-something from Kansas took down golf's greatest in a final-round scrap like no other.

Forty years on and it is a battle which is still regarded as one of the finest sporting duels in history.
Follow @cnnsport
Last year's British Open thrilled and captivated as Henrik Stenson versus Phil Mickelson unfolded at Royal Troon in an extraordinary contest where records were broken.
It is Stenson versus Mickelson which has the numbers, the history-making scores. Stenson's 20-under 264 is the lowest score in major history and the 41-year-old Swede's final-round eight-under-par 63 equaled the lowest score for a major championship round.
But that shootout did not come down to the final putt. It did not involve Jack Nicklaus, the most decorated player in history, being taken down by a player who would become the greatest links golfer of them all.
Read More
Turnberry 1977, a golfing bout so good that it is fondly remembered as the "Duel in the Sun."
Mention it to golf fans not even born four decades ago and they will knowingly nod. Books have been written about it, a restaurant named after it and the 18th hole at Turnberry has been renamed after this never to be forgotten contest.
As the Open takes place in Britain this week, we remember the match that made history.
Watson was a two-time major winner up against Nicklaus, winner of 14 major titles
READ: Links, lies and ladybirds: The Open 2017
READ: Beacons of beauty -- the world's greatest golf links

Scorched earth on a July Saturday

"I remember every one of his shots. And every one of mine." Tom Watson.
The 27-year-old Watson and Nicklaus, 10 years his senior, had matched each other in the third round, shooting 65s to go into the final day three shots clear of Ben Crenshaw in third place.
All eyes were on the American pair. There was only one show in town.
Such was the scramble to get to the course to watch the fireworks, a few players needed police escorts through nearby farms to avoid the early-morning traffic jam on the single road that led to Turnberry Golf Course.
(L-R) Watson plays from the ninth fairway, watched by Jack Nicklaus and his caddie
Would it be Nicklaus or Watson? Nicklaus, the blond statesman who had won 14 of his 18 majors by this time, had affectionately become known as the "Golden Bear." Watson had won the Open in Carnoustie in 1975 and his first Masters earlier that year, seeing off Nicklaus down the last stretch.
They were premier performers of their time and would, in the final 18 holes on Scotland's west coast, produce a show for the ages.
Contributing to the sense of theater was the British weather. Rain had become an unfamiliar sight in this part of the world during that sticky summer. The course had been scorched; the rough was wispy straw, footsteps created dust clouds which hung in the air on an already chokingly-tense day.
A famous photograph of Nicklaus, Watson and their caddies sitting on a rock as a storm passed over during the third round

A stampede, caddies fearing the worst

"I thought for sure Jack was going to get trampled." Angelo Argea, Nicklaus' caddie.
Nicklaus started in sparkling form, going three shots clear after four holes. Would class prevail?
Watson, the young talent retaining his poise despite being in the company of greatness, clawed himself closer to the 14-time major winner, sinking a 15-foot putt for a birdie on the 5th and following it up with another monster putt on the 8th. Kerpow! This was golf resembling the opening strip of a Marvel comic.
A bogey on the 9th put the Missouri-native one behind, but it was game on and the crowd knew it.
Thousands jostled for prime position, necks craned, eyes were as wide as novelty-shop eyeballs. Fans knew they were witnessing something special and, on the 9th hole, the masses spilled onto the fairway.
<div clas