Joseph Schooling: The boy who beat his hero Michael Phelps

The journey started eight years ago with a Singaporean schoolboy posing for a photo with the greatest swimmer of all time. It ended in Rio de Janeiro as he won his nation’s first ever Olympic gold medal.

They say not to meet your heroes; Joseph Schooling beat his.

Now 22 and training for the Aquatic World Championships — currently taking place in Budapest — Schooling remembers meeting Michael Phelps for the first time as if was yesterday.

“My dad hosted the US Olympic team at a country club in Singapore,” he tells CNN. “I was doing a Chinese composition paper and my mum said ‘Joe! Michael’s there, Michael’s there! Get up!’

“I was halfway through writing but dropped everything, went down and took a picture with him — that picture: me, with my glasses and braces, looking starstruck.”

The photo of a young Joseph Schooling meeting his idol in Singapore went viral during the Olympics.
CNN

He’d only started swimming because his father “almost drowned twice” and his parents wanted him to be “safe in the water.”

But this was a moment that inspired Schooling to intensify his training and leave his old life behind him. A year on, aged just 14, Schooling moved to the US to follow his dreams.

“The more mature I got, I knew that was what I wanted to do,” he says. “That it would be my ultimate goal in life: to win Olympic gold and, you know, race against Michael in that final.”

The London 2012 Games presented Schooling his first opportunity to achieve his Olympic ambitions. But it didn’t go to plan.

“I set pretty high expectations for myself in London and I was only 16 or 17,” he recalls. “I didn’t hit those goals, and I was crushed.”

Schooling hadn’t realised how good his idols would be until he was standing right next to them.

“I had to experience those things for myself,” he says. “I had a better understanding of where I stood among those guys.”

He finished his 200m butterfly heat in a disappointing eighth position — more than two seconds slower than his personal best — having been told by London 2012 officials ahead of event that his cap and goggles were unfit for Olympic competition.

“That probably messed up my race, but I’m not making any excuses,” he said at the time, also failing to qualify in the 100m butterfly event. “It’s a learning experience. I’m only 17 and I have a long way to go.”

Schooling was granted deferment of his Singapore National Service to continue training, and traveled to Rio four years later as the top seed in the 100m butterfly firmly focused on gold.

He was flanked by Phelps once again, only this time as a direct rival rather than a fan.

Schooling and Phelps, side by side.
GABRIEL BOUYS/AFP/AFP/Getty Images

READ: Water polo - the sport that’s like rugby in the water

The American, 31, was bidding to win an unprecedented fourth consecutive gold medal in the event; instead, the world witnessed the rise of a new Olympic star.

“At the 50m turn and the last 15-20m I kind of peeked both ways to see where people were,” says Schooling, smiling as he recalls the race.

“I saw I was ahead and that’s when I was like ‘OK, you’d better get your hand to the wall!”

Swimming greats Chad le Clos, Laszlo Cseh and Phelps linked arms as they stood upon the podium, with all three men awarded the silver medal.

After a unique three-way tie for second, all three paid homage to a new champion: the 21-year-old from Singapore.

Video Ad Feedback
The sport that's 'like rugby in the water'
02:25 - Source: CNN

“What a race!” enthused Phelps, beaten in his last ever individual event. “Congrats to Joseph Schooling! We’ve got an updated pic!”

As Schooling stood proudly atop the podium and the anthem rang out, the joy of his first ever Olympic gold was shared by an entire nation.

“It was probably one of the proudest moments of my life,” he says. “I don’t think the Olympics has ever heard Majulah Singapura before!” 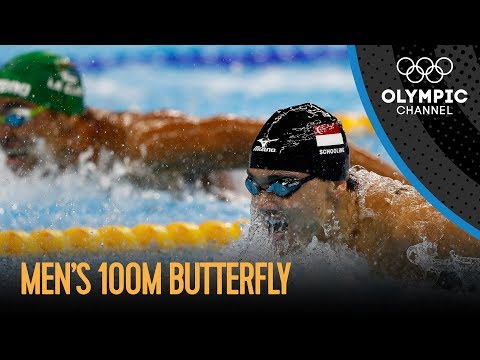 We’d better all get used to it.

Schooling’s time of 50.39 seconds at Rio 2016 set a new Olympic record, and nobody has come close to it since.

He now has Phelps’s world record of 49.82 seconds — set at the peak of the Baltimore Bullet’s powers during the Rome 2009 World Aquatics Championships — in his sights.

“My ultimate goal would be to defend my title in the 100m butterfly and break the world record,” says Schooling, looking ahead to the FINA Championships in Budapest. “I’m excited to see what the summer holds for me.”