Analysis by Chris Cillizza, CNN Editor-at-large
Updated 1:00 PM EDT, Sun August 26, 2018
Link Copied!
Ad Feedback
Video Ad Feedback
John McCain
U.S. Sen. John McCain speaks to the media after the closed briefing May 18, 2017 on Capitol Hill in Washington, DC. Rosenstein participated in a closed briefing for senators to discuss the removal of former FBI Director James Comey.
Tasos Katopodis/Getty Images
Now playing
01:56
The incredible career of John McCain
CNN
Now playing
01:08
Military flyover honors John McCain
Obama on McCain
CNN
Now playing
02:36
Obama recounts getting call from McCain for eulogy
CNN
Now playing
02:12
Meghan McCain: A few resented my father's fire
Now playing
01:58
Meghan McCain: My dad was defined by love
Now playing
01:32
Lieberman: McCain floated idea of me on ticket
WASHINGTON, DC - SEPTEMBER 1: Cindy McCain looks on as a joint military service casket team carries the casket of the late Senator John McCain following his funeral service at the Washington National Cathedral, September 1, 2018 in Washington, DC. Former presidents Barack Obama and George W. Bush delivered eulogies for McCain in front of the 2,500 invited guests. McCain will be buried on Sunday at the U.S. Naval Academy Cemetery. (Photo by Drew Angerer/Getty Images)
Drew Angerer/Getty Images
Now playing
03:31
Friends and family pay final tribute to McCain
McCain family euology smile
CNNI
Now playing
00:55
Mike Pence's remarks make McCain family smile
mccain lie in state capitol steps rain cupp vpx_00011010.jpg
CNN
Now playing
01:45
Rain suddenly falls as McCain's casket escorted into Capitol
Larson Family Photos
Now playing
00:59
McCain will be buried next to his 'wingman'
Carolyn Kaster/AP
Now playing
02:35
Former Presidents honor John McCain
john mccain ernest hemingway
CNN
Now playing
03:03
How McCain helped save Ernest Hemingway's home
CNNI
Now playing
01:26
John McCain's hearse leaves his home
Chip Somodevilla / Getty Images
Now playing
01:12
Obama on McCain: We are all in his debt
CNN
Now playing
02:10
Former staffer jokes about McCain's driving
CNN
Now playing
00:58
McCain's former aide: He was an urgent man
Secretary of Defense James N. Mattis and Chairman of the Joint Chiefs of Staff Marine Gen. Joseph F. Dunford Jr. will brief the media on Tuesday, Aug. 28, at 10 a.m. EDT, in the Pentagon Briefing Room (2E973). DAILY SCHEDULE: Secretary of Defense James N. Mattis and Chairman of the Joint Chiefs of Staff Marine Gen. Joseph F. Dunford Jr. brief the media at 10 a.m. EDT in the Pentagon Briefing Room (2E973). Both U.S. and foreign journalists without a Pentagon building pass must be pre-registered in the new Pentagon Visitor Management System to attend this briefing; plan on being escorted from the River Entrance Pedestrian Bridge or the Pentagon Metro Entrance Facility only. Please arrive no later than 45 minutes before the briefing; have proof of affiliation and photo identification. Please call 703-697-5131 for any questions and escort into the building. The briefing will also be streamed live on www.defense.gov/live. Secretary of Defense James N. Mattis hosts an enhanced honor cordon welcoming Minister of Defense Ryamizard Ryacudu of Indonesia, to the Pentagon at 2:30 p.m. EDT on the steps of the River Entrance. All journalists desiring to cover the cordon must obtain a wristband from security screening. Journalists without a Pentagon facility access card must go through security screening at the base of the River Entrance Pedestrian Bridge, and will be escorted to the cordon from there. Security screening will begin at approximately 1:45 p.m. EDT; have proof of affiliation and two forms of photo identification. Journalists with a Pentagon facility access card, and whom have entered the building prior to 1:30 p.m. EDT, may go through security screening at the River Entrance to obtain their wristband. All journalists wishing to cover the honor cordon, including those with a Pentagon facility access card, must be in place no later than 2:15 p.m. EDT. Once security screening has been initiated at the base of the bridge, all journalists entering the building via the bridge for any reason, including those with a Pen
POOL
Now playing
00:58
Mattis on McCain: US has lost a great patriot
Now playing
03:16
Vietnamese pay tribute to Sen. John McCain
WASHINGTON, DC - OCTOBER 25: Sen. John McCain (R-AZ) looks on during a brief press conference before an Armed Services conference committee meeting on the National Defense Authorization Act on Capitol Hill, October 25, 2017 in Washington, DC. (Photo by Drew Angerer/Getty Images)
Drew Angerer/Getty Images North America/Getty Images
Now playing
02:14
Daughter, Trump react to McCain's death
Washington CNN  —

Of the eight decades he spent on earth, fully six of them were dedicated to public service. That legacy of service is something the likes of which we may not see again. The passing of McCain provides the American body politic a moment to pause and reflect on the remarkable life of the Arizona Republican.

This picture taken in 1967 shows McCain lying on a bed in a Hanoi hospital.
AFP/Getty Images

McCain has been part of collective national consciousness for the better part of the last five decades – ever since his capture and ultimate release five years later (in March 1973) from a Vietnamese prisoner of war camp. The stories of his torture at the hands of the Vietnamese were – and are – excruciating. His unwillingness to use his status – his father was an admiral in the Navy – to gain early release from the camp exemplifies a selflessness and sacrifice most of us can’t even begin to imagine.

Less than a decade after he emerged gaunt and hobbled from that prison camp, McCain was in the US House. Four years after that – in 1986 – McCain was elected to the seat left behind by the retirement of Sen. Barry Goldwater.

His rapid rise in politics was slowed during the early 1990s when McCain was implicated in the “Keating 5” scandal in which he and four other senators were accused of exerting their influence on behalf of a wealthy campaign donor named Charles Keating. The Senate ethics committee ultimately found that McCain “exercised poor judgment in intervening with the regulators’ on Keating’s behalf” but added that the actions he undertook “were not improper nor attended with gross negligence.”

Slowly but surely, McCain began to build a national profile in the wake of that scandal – and heavily influenced by it. Having flown too close to the line between money and politics, McCain was reborn as a committed reformer, with campaign finance reform as his main priority.

Even so, McCain was largely ignored as a major player in the 2000 presidential race when he announced his candidacy in September 1999. Then-Texas Gov. George W. Bush was considered the all-but-certain nominee and McCain wasn’t seen as one of the people who might even have a puncher’s chance against the scion of the first family of Republican politics.

But McCain caught lightning in a bottle in a way that can only happen in the swirl of a presidential primary campaign. Riding around New Hampshire in a bus dubbed the “Straight Talk Express,” McCain became the ringmaster of a compelling political circus – holding court for hours on end with reporters and aides about whatever topic anyone could think of.

It was a political campaign the likes of which seemed to only ever exist in the movies; an exuberant, upstart campaign that played free and loose because the candidate knew he had nothing to lose.

When McCain crushed Bush by 18 points in New Hampshire, he looked and sounded every bit the giant killer – the maverick who had beaten the Man. Reality hit back hard in the South Carolina primary, which is still seen as one of the nastiest races ever conducted. McCain’s loss to Bush there effectively ended his insurgent bid and left him deeply embittered toward Bush and the Republican Party that had rallied against him.

McCain found a silver lining – as he always seems to do – using his newfound national profile to push through comprehensive campaign finance reform – against the wishes of almost everyone in his party – in 2002.

By 2004, McCain had shelved the enmity between he and President Bush and campaigned hard for the president’s re-election against then Sen. John Kerry – a move that won over many rank-and-file Republicans who had been leery of McCain’s outspoken outsider campaign. When the country started to turn on the Iraq War, McCain encouraged Bush to surge troops back in – a key decision for his formal rival and the nation.

McCain is unique in politics as someone who will speak his mind and support his conscience. He ran for president in 2008 and started as the front-runner. But, hamstrung by his prominent support for comprehensive immigration reform – something wildly unpopular to much of the GOP base – McCain’s campaign totally collapsed in the summer of 2007.

Lots of politicians – heck, most of them – would have given up. McCain just kept getting on those southwest flights to Manchester, New Hampshire. Relentlessly, he began to, again, build himself back up in the state that had launched his first presidential campaign. New Hampshire again went for McCain – and this time he used it as a springboard to catapult himself to the nomination.

It was a nomination that turned out to be barely worth having. The unpopularity of Bush, the Wall Street collapse and the once-in-a-generation political talent of Barack Obama ensured that the 2008 general election was never really close. (McCain didn’t help himself when, in the midst of the financial panic, he declared that “the fundamentals of the economy are strong.”)

That convincing defeat ended McCain’s chances of being president. But it began this most recent phase of his life – as a statesman.

“I remind all my colleagues: We had an election,” McCain said when he returned to the Senate in January 2009. “I think the message the American people are sending us now is they want us to work together, and get to work.”

In the intervening years, McCain cemented his role as a hawkish voice on foreign policy, a fierce defender of the military and, yes, someone who occasionally – and with glee – throws a wrench into the machinations of his own party. Following the election of Donald Trump in 2016, McCain has repeatedly blasted the Republican president for his handling of Russia and its efforts to meddle in the election as well as for Trump’s firing of former FBI Director James Comey.

I love @SenJohnMcCain. Unbeatable, unbreakable. He's Teddy Roosevelt's "man in the arena" even when we're on opposite sides. God bless. pic.twitter.com/0sBY4QynWp

The regard with which McCain is held within the Senate – and politics more generally – was reflected in the encomiums offered to him. Mitch McConnell and Joe Biden praised him. So did Ted Cruz and Nancy Pelosi.

Kerry, his former rival, used the Teddy Roosevelt quote, “a man in the arena,” to describe McCain. It’s one of the Arizonan’s favorites. He used it for one of his best TV ads of the 2000 campaign.

Man In The Arena 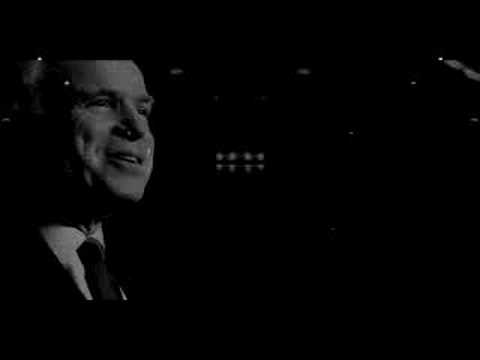 McCain, as he was the first to tell anyone who asks, was not a perfect politician. He sacrificed principle in favor of politics at times. He said things in the heat of the moment he regretted later. His story is not “Mr. Smith Goes to Washington.” He is someone who sacrificed much for the country and to whom the country has given much in return.

His story is truly amazing not because he did everything right or because everything went his way. He didn’t. And it didn’t. His story is amazing because his life isn’t about a steady ascent to the top. It is about a series of falls, missteps and hurdles – none of which he allowed to beat him.

McCain isn’t a man who was never knocked down. He’s a man who just kept getting up.

Update: This story was originally published on CNN and updated after McCain’s death on August 25.