A tourist from New Zealand was killed by the blast of a plane at an airport in the Dutch Caribbean island of St. Maarten.

The 57-year-old woman, who was not identified, was hanging onto a fence to watch the plane leave Wednesday, the island’s police said on Facebook.

The jet’s blast was so powerful, it knocked her down, police said. She later died.

Watching planes land and take off at Princess Juliana International Airport is a well-known tourist attraction, as approaching aircraft tend to fly very low above their heads.

But both airport and local authorities warn against getting too close to the planes, calling the practice “extremely dangerous.”

girl blown over by jet blast at Maho Beach 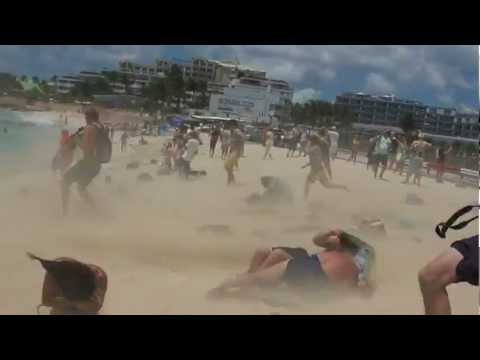 Police didn’t say what kind of plane was involved in Wednesday’s incident.

Island authorities say they have taken necessary precautions to warn tourists not to get too close to planes. They’ve placed signs and they patrol the area to warn people, the police department said.

Thrill-seekers and tourists have been watching planes take off and land at the airport since it opened in 1943.

In 2012, a woman was injured after she was flung into a nearby concrete barrier by a jet blast.

In 2014, two pilots died after crashing into the water shortly after taking off from the airport.