That experience, which he wrote about, can now be played in a video game

I went into the Walden Pond video game because I wished to play deliberately, to front only the essential facts of life, and see if I could not learn what it had to teach, and not, when I came to die, discover that I had not played the game.

That’s a bastardization of Henry David Thoreau’s mission statement from his classic gospel of mindful, self-reliant living, “Walden: Or, Life in the Woods.” This great American philosopher and naturalist – whose 200th birthday should be celebrated today, and every day hence, with a daily moment of nature Zen – made a well-known experiment out of living for two years, two months and two days in a walk-in-closet-size cottage in the woods by the pond near Concord, Massachusetts.

The action-packed observing, thinking, writing, walking and chopping wood, lives on in a new first-person video game simulation called “Walden, a game,” created by Tracy J. Fullerton, director of the Game Innovation Lab at the University of Southern California School of Cinematic Arts and funded in part by the National Endowment for the Arts and the National Endowment for the Humanities.

I made my first pilgrimage to the real Walden Pond in college, having just absorbed Thoreau’s account of living there, as well as a thick collection of essays by him and others who made up the Transcendentalist movement of the early to mid-1800s.

They were the American progressives and the intellectuals of their day. They argued for gender equality, universal education and environmental conservation and argued against slavery, laws that perpetuated poverty and the death penalty. Thoreau was arrested while living at Walden Pond and briefly jailed (where he wrote his essay “Civil Disobedience”) for not paying taxes out of protest over government funding of the Mexican-American War.

But the Transcendentalists went deeper than mere counterculture activism – just as the bohemians, Beats and hippies would – by walking through doors of perception. In particular, the Transcendentalists raised nature to a spiritual plane. For them, the meaning and power of trees, water and wind “transcended” the mere senses. Getting in touch with the natural environment will cure what ails your soul, they believed, our souls being just parts of Nature’s greater “Oversoul.” And they pursued these experiences, it should be noted, without drugs to shortcut the journey.

On my first visit to Walden Pond, I circumnavigated it, walking the 1.7-mile pond trail slowly and mindfully, as if touring a cathedral. I genuflected at the cabin site. I sketched the pond in my “writer’s notebook.” I bought some books at the well-stocked gift shop. I baptized myself in the natural beauty and history.

It’s a lovely place that has changed little since Thoreau lived there. In his time, Walden Pond – and the woods around it – were owned by Ralph Waldo Emerson, the essayist and intellectual leader of the Transcendentalists. Today, Walden Pond is a state reservation. Day-trippers can swim in the water and have a picnic while fans visit the stone markers that outline where Thoreau’s cabin once stood and walk inside a nearby re-creation of it. Unfittingly, there is no overnight camping in the park.

I’ve been back to Walden Pond several times since that first visit, the most recent to deposit the ashes of my grandfather who was born and raised in Fitchburg, less than 30 miles west of where all the meditative action took place. I want some of my ashes to be left there, too.

But my most recent visit to Walden Pond was virtual.

Shall we play a game?

I must confess that as gaming goes, I suffer from arrested development. I nostalgically re-purchased an old Atari 2600, which is the most advanced gaming system I’ve ever owned. So I don’t feel qualified to rate “Walden, a game” against any of its contemporaries, except to note that it has the same character POV interface as popular shooting games such as “Call of Duty” and “World of Warcraft.”

Except, instead of shooting people in the head, you plant beans and read letters. 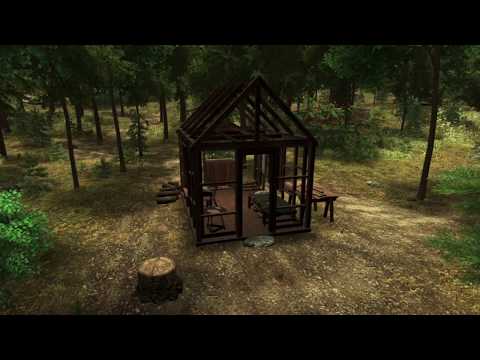 The game starts, as Thoreau did, on July 4, 1845. (The poet Robert Frost described “Walden,” the book, a “declaration of independence,” “a tale of adventure” and a “gospel of wisdom.”) At the start, the cabin is just a skeleton frame, allowing for views of trees and the occasional scurrying or flying animal. The bed and desk are there. As is a soundtrack of nature sounds: birds, wind and the occasional mosquito.

The object of the game is to make it through a year of days, which are short (15 minutes each in real time). Although there are plenty of activities available, you need to tend a garden and perform odd jobs to make money for food and supplies (such as an ax and fishing pole) to endure, especially in winter. “Our life is frittered away by detail,” Thoreau wrote in the second chapter of “Walden” and relives in the game, as each day is an effort in practicality and basic survival.

The best place to meditate? At work.

But is that really the object of the game? It is paced to move no faster than a walk. The screen is filled with natural beauty. There are nightly reflections in the journal. Communing with nature, the game reminds you, restores inspiration.

And that communing is, by far, the most enjoyable part: being still and watching the wind slowly sway flowers and branches, glimpsing a chipmunk, hearing an owl, stargazing at night, looking out over the pond on foggy mornings. “That man is richest whose pleasures are the cheapest,” Thoreau wrote in his journal.

The purpose of the game is practical but also intellectual and spiritual. And those were exactly the qualities that marked the real Thoreau’s experiment.

I didn’t make to the end. Yet. I have hours (virtual months) yet to go. But as enjoyable as it was to escape into virtual Walden, it was also a bit stressful. At first, I walked around the area, which is very similar to real-life Walden. I picked up objects and listened to the spoken-word memories they evoked, and I enjoyed staring at the scenery and listening to the natural symphony. But then I’d run out of food! I’d be told my energy is running low, and my screen would go into tunnel vision as if I were about to pass out!

Drawing upon your own life experiments

I soon developed a daily pattern of going over to Emerson’s house to perform odd jobs for loose change that I would then spend at the general store. I needed to do more long-term planning for food and shelter, but that required more money. I went to the post office looking for better-paying job notices, but they required tools I couldn’t afford.

I feared I’d starve, or freeze to death in the winter. Instead of being shrewd and self-sufficient like Thoreau, my experience more resembled that of Christopher McCandless, the intrepid backpacker who similarly went “into the wild” (the title of Jon Krakauer’s book about him), only to be found dead of starvation and possible food poisoning.

I took some comfort knowing that in real life, Thoreau was regularly supplied with food, clothes and fuel by family and friends, particularly his mother and the Emersons.

Nevertheless, “Walden, a game” is no mindless mindfulness app; it’s an introspective “Oregon Trail” that reminds you it’s all well and good to sit and reflect by the fire at pond’s edge, but there also needs to be a fish cooking upon that fire.

Take it where you can get it

There is a legitimate debate about whether technology is bringing us closer, perhaps faster, to enlightenment and the essentials of life. The counter is that it all amounts to little more than increasingly attractive distractions.

Before playing Walden, I thought I’d made up my mind on the matter. Living mindfully, intentionally, is about engagement in reality (even the boring quotidian bits), not escaping it. I tried a virtual reality meditation once, and it was a lovely three-minute vacation. But real meditation requires removing stimulation and intrusive thoughts to slow your mind and better understand how it works – not a trip to a computer-designed beach.

I reconsidered this debate while I played “Walden.” Am I communing with nature when nature is merely pixels? Are the sounds the same or even better or worse quality than the real ones I hear sitting on my back porch? Certainly, walking into virtual Walden Pond isn’t the same as wading into actual Walden Pond. Circumnavigating the place by foot is more meaningful than doing so by holding down an arrow key.

Then again, isn’t reading Thoreau’s book a virtual reality? Or, to get metaphysical for a moment, isn’t all of “reality” just a flawed simulation presented to us through our senses on the big Mac screens of our minds?

I asked the game’s creator about this debate, and she agreed that technology is accelerating our lives, in conflict with the goals of “simplicity and relation to nature.” But Fullerton argues that “Walden, a game” creates “an immersive experience that slows us down, gives us time and permission to contemplate and reflect, and, perhaps, bring that slower pace back into our own busy lives where we can.”

Here is where I’ve come out on this vital matter, after enjoying many hours at the real Walden Pond and at its delightful simulation: It’s all good for us. Take what you can get when you can get it.

But enjoy the game as a reminder to engage with a more tactile reality. “If you have built castles in the air … that is where they should be. Now put the foundations under them,” Thoreau wrote in “Walden.”

Read “Walden: Or a Life in the Woods.” Make a pilgrimage to Concord. Listen to the birds outside your home. Note the movements of a squirrel or a pigeon. Admire the clouds. Stop and smell the roses. Stop and sketch the roses. Marvel at the moon and stars. Watch a rainstorm. Catch a sunset or sunrise every once in a while. Think about your favorite season. Walk barefoot in the grass. Hug a tree. Swim in a natural body of water. Go camping. Play “Walden, a game.” Meditate at work. Take 10 deep breaths. Hell, take just one. Sit for a moment and do nothing more than think.

That’s how you win.