A father’s powerful plea for his transgender son wins hearts

A video has surfaced of a father speaking out about his son, who is transgender

Ken Ballard will tell you he’s a man of few words. But when it came to his 15-year-old transgender son, he couldn’t stay silent.

It was hard for him to accept his son’s transition, but the Texas father is fighting for his son’s right to use the bathroom of his choice.

A video surfaced of Ballard, 45, speaking about his son, Ashur, in January while state lawmakers debated LGBT bathroom access.

Ballard, baseball cap and all, put his hands in his pockets and shared the heartbreaking story of finding his son’s suicide letter.

“I was asked to talk today because I have a son,” the father from Little Elm, Texas, said in the video. “The thing is I only knew I had a son for the past two years. Twelve years prior to that, I kept calling him my daughter. That’s what they told me at the hospital.” 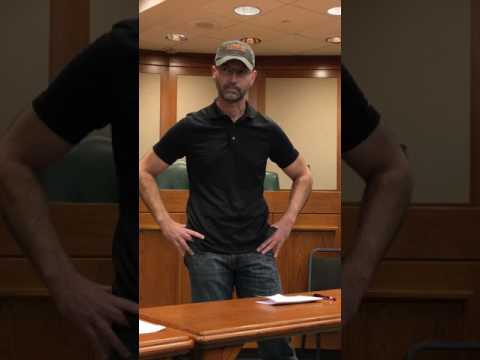 He says his son played the role of daughter for 12 years, until he couldn’t anymore.

“Was I going to be his bully? Was I going to try to put him back in a box that fit the rules of my world at the time?” he asked in the video. “Or only end up losing that child all together?”

The video, which was reposted by an advocacy group called Equality Texas last week, has since garnered positive messages from around the world.

“As a mom of a 23 year old MTF (male-to-female), I feel your strength and love! Our children deserve NO LESS! We fight together!!!” one commenter wrote.

Another said, “I think these parents of trans kids who stand by their children are models to EVERY parent out there. Bravery and selflessness to a whole new level.”

Giving his son a voice

At age 11, Ashur struggled openly with his identity. He began to self-harm and was admitted to the hospital for psychiatric evaluation.

Around that time, his dad found the letter he wrote, and Ashur came out as transgender.

“He began living as Ashur at this point, and we have not turned back,” Ballard told CNN. “He has become stronger, healthier and gets better every day, I would say.”

He and his wife, Melissa, advocated strongly for their son and fought for LGBT rights during the Texas legislative session this year.

“I personally think that a trans-boy is a boy and a trans-girl is a girl. A trans-woman is a woman. A trans-man is a man. So, nobody should be policed about where they want to go to the bathroom,” his wife said, according to CNN affiliate KXAN.

Although he’s “not a crowd person,” Ballard chose to testify at the state Capitol in March to speak for Ashur and people like him. He was among hundreds of witnesses who spoke about their experiences.

“Prior to Ashur, I had not had a need to be heard as I was the person that could go about my day and nothing in Austin impacted much about my life,” he said. “Then I found myself with a transgender son.”

He has since received overwhelmingly positive responses from people in the LGBT community who didn’t get support from their parents. But he said he’s just doing his job as a dad.

The measure in question would have in part required a person who is transgender to use bathrooms that match their “biological sex.” Ultimately, it failed to pass during the regular legislative session, but it’s on the agenda of a special session that starts July 18.

The legislation was similar to the controversial “bathroom bill” in North Carolina that led businesses to leave the state and major sporting events and concerts to be canceled.

Some business and tourism groups in Texas fear similar responses there if the bill were to pass.

Ballard said what matters most to him is his child’s happiness.

“This is what we all want for our kids, right? Does not matter if they are trans, gay, straight, smart, athletic, or anything else, unless they can be happy,” he said.