Benjamin Netanyahu and Narendra Modi hit the beach to do business

Israel’s Prime Minister Benjamin Netanyahu and his Indian counterpart Narendra Modi brought a whole new definition to “chilling out” after wading in the Mediterranean Sea on Thursday.

Modi, who is on a three-day visit to Israel, checked out a desalination plant and tasted the water.

“There’s nothing like going to the beach with friends,” Netanyahu wrote on Twitter Thursday after the event.

The apparent friendship between the two leaders has not gone unnoticed, with photographers capturing images of the pair hugging over the past few days.

Modi, the first Indian prime minister to visit Israel, arrived at a time of good relations between the two countries, which are marking 25 years of diplomatic ties.

Thank you my friend, PM @netanyahu for the signed photo, your kind words, amazing hospitality & passion towards #IndiaIsraelFriendship. pic.twitter.com/1jUtMG3F85

Seven major agreements have been signed, dealing with water, agriculture and space technology. The two countries have also created a $40 million dollar research and development fund for joint innovation.

The visit to Olga Beach, close to Hadera, allowed Modi to learn about the desalination plant, which is capable of supplying drinking water for 22,000 people per day. 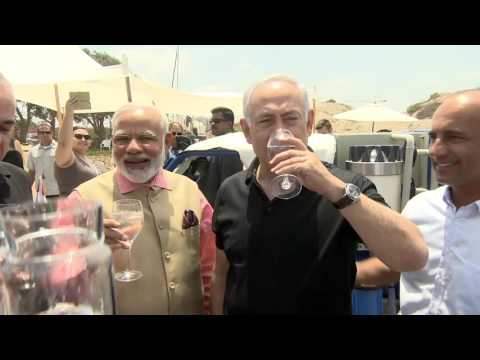 Israel’s desalination project has been successful in helping ease pressure on the country’s natural water resources.

India hopes Israeli technology can help its own problems with its own chronic water shortages.

Amir Tal in Jerusalem contributed to this report.