Mark Cavendish out of race through injury

A cycling sprint finish is mesmerizing to watch. Riders traveling at high speed, like a swarm of bees, jostle for position in pursuit of glory before a winner finally emerges from the bedlam.

But it’s also a place of danger. And it took just a flick of an elbow for chaos to engulf Tuesday’s stage of the Tour de France — arguably the world’s toughest professional bike race.

Arnaud Démare won the stage which ended in Vittel — becoming the first Frenchman to win a bunch sprint at the Tour for over a decade — but it was the horror crash behind him that has dominated the headlines.

With 200 meters to go of stage four, Peter Sagan veered to his right and appeared to elbow Mark Cavendish, forcing him into the barrier at speeds of 60 kilometers per hour (37mph) and leaving the Briton with a fractured right shoulder blade and subsequently out of the race.

Compatriot Ben Swift and Germany’s John Degenkolb were also thrown from their bikes, with Sagan escaping the melee to seize second place.

As things became clearer, Sagan expressed sympathy for his rival but, having been expelled from the race, appealed to organizers and insisted he hadn’t done anything wrong.

The cyclist then took his case to the Court of Arbitration for Sport, but his request to be reinstated in the race was rejected Thursday. 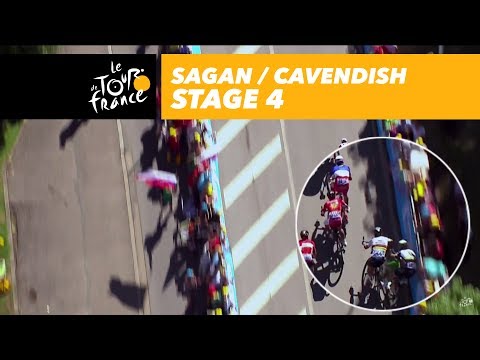 Sagan and Cavendish had been expected to contest the Tour’s sprint stages, but the absence of both cyclists has thrown the race for the event’s green jersey wide open.

“I’m obviously massively disappointed to get this news about the fracture,” said Cavendish, having crossed the line several minutes after Démare and later confirmed his withdrawal from this year’s event.

“I feel I was in a good position to win [the stage] and to lose that and have to leave the Tour — a race I have built my whole career around — is really sad.

“I get on well with Peter and a crash is a crash but I’m not a fan of him putting his elbow in like that.”

READ: Chapel that’s a shrine to cycling’s fallen and heroes

Sagan gives a kick of his elbow and Cavendish (L) falls near the finish line of stage four.
JEFF PACHOUD/AFP/AFP/Getty Images 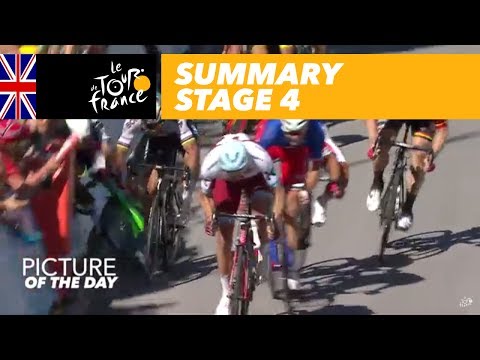 The 32-year-old Cavendish, who rides for the Dimension Data team, has 30 stage wins to his name, and had been bidding to reach Belgian Eddy Merckx’s all-time record number of 34.

“Elbows fellow competitor in the head … can only result in one decision,” posted Hammond, in a tweet that would later prove prophetic.

Causes a big crash at 1.5 to go, elbows elbows fellow competitor in the head 300 meters... can only result in one decision. #Goodbye pic.twitter.com/xeTB0llOPF

Sagan himself was mainly concerned with the extremity of the measure, having initially been docked 30 seconds, 80 points and relegated to 115th place on the stage before the full extent of his punishment was revealed.

“Mark was coming really fast from the back and I just didn’t have time to react and to go left,” the Bora-Hansgrohe rider explained. “He came into me and he went into the fence.

“When I was told after the finish that Mark had crashed, I went straight away to find out how he was doing.

“We are friends and colleagues in the peloton and crashes like that are never nice. I hope Mark recovers soon.”

Bora-Hansgrohe officials similarly rejected the claim the rider had “caused, or in any way intended to cause, the crash.”

But the head UCI comissaire, Philippe Marien, stated the far sterner sanction was applied because the offender “had put several other riders involved in the crash in danger” and he had sensed a moment to “set boundaries.”

“Before the Tour de France we warned the sprinters that we would look very closely at every sprint,” said Marien. “That is what we did today.”

“It was not about Sagan, but about the act the rider made. What happens here, it looks like it was on purpose and it almost looks like hitting a person.

“It’s not about Cavendish and Sagan; it could be anybody, the names won’t matter.”

The verdict has split opinion among commentators, fans and fellow riders.

Retired Australian cyclist Baden Cooke, winner of the 2003 green jersey, expressed his opinion that it was “unintentional.”

“Sending Sagan home was a bad decision,” he tweeted. “You often use your elbows to give yourself space to avoid crashing yourself.”

Sending Sagan home was a bad decision. It was unintentional. You often use your elbows to give yourself space to avoid crashing yourself.

Just saw the finish of today's @LeTour stage. Totally disagree with the decision to DQ Sagan. Put @petosagan back in the race!

It was a sentiment shared by former rider Jens Voigt, who contended the disqualification was “too much.”

So in my private opinion-the disqualification is too much.I am ok with -80 points in green jersey,last place today and timepenalty for sagan

But Dimension Data performance director Ralf Adag said: “If it’s in rule book that you can elbow someone with 200m to go, we need to rewrite the rules.”

Team Sky’s Geraint Thomas, the early holder of the yellow jersey, also fell on stage four but reassured fans he was fit to continue, urging Cavendish to “heal up quick.”

Do you think Sagan should have been disqualified? Have your say on CNN Sport’s Facebook page

As it stands, Sagan is the first world champion to be thrown off the race since 1998, when Frenchman Laurent Brochard was disqualified for his role in the Festina drug scandal.

He is also the first rider of any standing to be removed from the competition since 2010, when Australia’s Mark Renshaw – then leading out Cavendish for Team HTC-Columbia – appeared to headbutt rival Julian Dean during a comparable sprint finish.