When Hong Kong was handed over to China in 1997 after more than 150 years of British rule, the Bauhinia flower was chosen as the symbol of the new Chinese special administrative region.

A giant golden statue was gifted to the city by Beijing and erected at Golden Bauhinia Square, which is now used for official flag-raising ceremonies.

Early Monday, several pro-democracy activists staged their own ceremony, covering the statue in a large black cloth to expose “the brutal truth behind the glorious rhetoric” of Hong Kong’s handover to China.

The protesters were led by Joshua Wong, the former “Umbrella Movement” leader turned international political activist and leader of the Demosisto political party.

“(We) wish to appeal to fellow citizens to take part in direct civic actions on 1st of July to demonstrate our aspiration to democracy and the right to self-determination,” Demosisto said in a statement.

Monday’s action is the first of what is expected to be many protests around the handover anniversary, which will be heightened by the presence of Chinese President Xi Jinping, who is due to arrive in the city on Thursday.

According to local media, police in the city are under instructions to shield Xi from as many of those protests as possible – including preventing certain phrases and images banned in China or that might “embarrass” Xi from appearing in his eyeline.

A protester holds a placard that reads "Hong Kong Independence" near the government's headquarters in Hong Kong on August 5, 2016, during the city's first pro-independence rally.
ANTHONY WALLACE/AFP/AFP/Getty Images

Since both the Umbrella Movement and government-led political reform ended in failure, there have been growing demands in the city for full independence from China. Few things are more likely to rile up Chinese leaders than talk of separatism, be it in Hong Kong, Tibet or Taiwan – a self-governing island that has been de facto independent for decades but is still claimed by Beijing.

While most Hong Kong independence activists are critical of the UK for denying the city a chance of going it alone – as all other British colonies were able to – the flag of the Hong Kong Colony has nevertheless become a symbol of the movement, probably because it is guaranteed to annoy China.

An image of Xi holding a yellow umbrella has been banned, according to the Ming Pao newspaper. The umbrella became a symbol of the 2014 movement after protesters used them to protect themselves against police pepper spray.

Photo of President Xi on a site inspection in Wuhan on a rainy day last year won the China top journalism award pic.twitter.com/GlLE5fTOdl

After Chinese state media published a photo of Xi carrying an umbrella on a site inspection in Wuhan province at the height of the Hong Kong demonstrations, the image was quickly remixed and adopted by the umbrella protesters.

On June 4, 1989, the People’s Liberation Army sent tanks and troops into Tiananmen Square to clear pro-democracy protesters who had been occupying the site at the heart of Beijing for weeks. Hundreds were killed in the crackdown, and thousands more arrested. Hong Kong is the only place on Chinese soil which holds a major public commemoration of the event.

“The June 4 incident” remains one of the most censored topics in China, with all references to the massacre, no matter how oblique, banned or deleted. That means no social media posts around the anniversary using the words “Tiananmen,” “June,” “today,” “student movement,” “tank man,” or “square,” and no use of the numbers 4, 6, 8, 9 or any combination that adds up to 64 or 89, or even “May 35.”

In 2013, even ducks were banned, after a giant yellow duck art installation was adopted as a way to bypass the censors.

A key demand of the 2014 protests – which were sparked after Beijing refused allow Hong Kongers to elect their own leader without China choosing the shortlist – “I want true universal suffrage” (“ngo jiu zan pou syun” in Cantonese) has become a key rallying cry for pro-democracy activists in the city.

The slogan has been emblazoned on posters, written on walls, beamed onto the sides of buildings, and hung from Hong Kong’s iconic Lion Rock mountain, which overlooks the city.

Protestors hold up their cellphones in a display of solidarity during a protest outside the headquarters of Legislative Council in Hong Kong on September 29, 2014.
XAUME OLLEROS/AFP/AFP/Getty Images

While police may be able to prevent Xi from seeing anything that displeases him, drowning out the many Hong Kong protest songs might be a more difficult task. 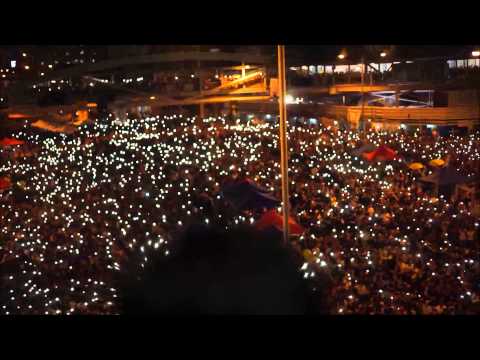 “Boundless oceans, vast skies,” a barnstorming ballad released in 1993 by the Hong Kong rock band Beyond has long been the unofficial anthem of the Hong Kong pro-democracy movement due to its lyrics about freedom and hope written by front man Wong Ka-kui, who died in a freak accident shortly after its release.

While “Do you hear the people sing?” – a defiant call for solidarity and resistance from the musical Les Miserables – has been sung by protest movements around the world for years, it’s popularity increased after 2014, thanks to the release of a Cantonese language cover. 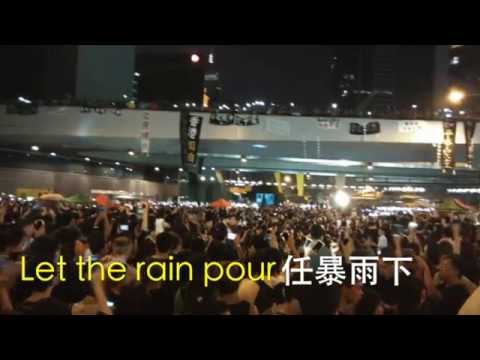 As tens of thousands of Hong Kongers gathered in the streets in 2014, many felt they needed their own anthem – rather than borrowing those of previous movements – and several specially-written songs were released. “Raise the umbrella,” written by Lo Hiu-pan hours after police fired tear gas at peaceful protesters, quickly became the most popular, featuring vocals from local popstars Denise Ho and Anthony Wong.