There’s a good chance that somewhere on Capitol Hill right now, a group of 13 Republican senators from 10 states, all white men, are drawing up a bill that could reshape health care in America for generations.

The deliberations have been closely guarded and no one, including many of their GOP colleagues, can comment with any certainty on what the closed-door process will ultimately produce. For the tens of millions of people who stand to be affected by the plan, the future is increasingly uncertain.

Unlike the long and often fiery national argument that preceded the passage of Obamacare, there have been no public hearings on the Trumpcare measure. Prodded by Democratic Minority Leader Chuck Schumer on Monday, Republican Majority Leader Mitch McConnell shrugged off a request for more than 10 hours of open debate.

Schumer’s caucus has since begun an effort to escalate the fight by gumming up the gears of the Senate, using floor speeches and other tactical procedural obstructions to invite new attention. Before that, they delivered to Republicans a trolling letter, “to assist you in scheduling a hearing,” listing 31 rooms the majority might want to use to host public discussion and testimony. 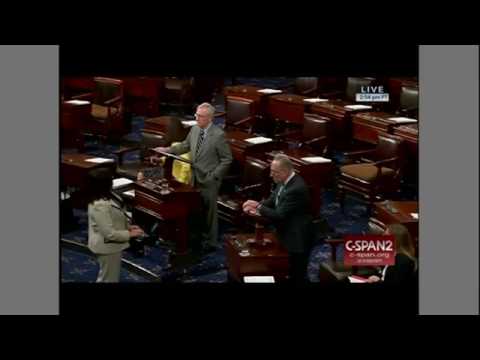 Shenanigans aside, the guiding logic on the GOP leadership side here is simple. The tighter the circle of officials involved in writing the bill, the fewer opportunities there are for potential complaints, misgivings or unflattering details to go public. Cut off from that information, political opponents’ ability to form their case against the bill are proportionately diminished.

But there is another, notable subplot here – and it centers on the Republican senators outside the drafting room.

Many of them were vocal critics of the House bill or come from states where Obamacare, or parts of it, like expanded Medicaid funding, are popular with voters. A number of them, like Maine’s Susan Collins, have voiced their concerns about the mysterious negotiations and plans for a rapid vote. (McConnell wants the matter settled before Congress breaks for its July 4 recess.)

“I always believe legislation is best crafted through the normal order,” Collins told the Portland Press Herald. “I think it’s much better to have committee consideration of bills, public hearings and to have a full debate. That’s the process for most well-considered legislation.”

Florida Sen. Marco Rubio told CNN’s Jake Tapper on Sunday he hopes there is “plenty of time for debate, analysis, and changes and input” ahead of the vote. “If that’s the process we follow, it will be fine. If it is an effort to rush it from a small group of people straight to the floor on an up-or-down vote, that would be a problem.”

“Yeah, I’ve got a problem with it,” she told the Juneau-based outlet. “If I’m not going to see a bill before we have a vote on it, that’s just not a good way to handle something that is as significant as and important as health care.”

Tennessee’s Bob Corker, one of President Trump’s earliest allies on Capitol Hill, registered his concerns with The New York Times, saying, “The process is better if you do it in public, and that people get buy-in along the way and understand what’s going on. Obviously, that’s not the route that is being taken.”

On the latter point, there is no real argument. Despite McConnell’s comments to CNN on Tuesday, when he called Democrats’ complaints “laughable” and said whatever comes next “will be about as transparent as it can be,” this is a legislative bum’s rush.

Wisconsin Sen. Ron Johnson was happy enough to make the point himself.

“My primary concern is writing a bill and not having enough time to analyze it,” he told The Chicago Tribune last week. “I don’t want to get jammed.”

And when CNN’s Manu Raju asked Arizona Sen. John McCain on Tuesday if he was “satisfied with the process,” McCain replied, “No, of course not.”

He then accused Republicans of defying their own standards, noting they “used to complain like hell when the Democrats ran the Affordable Care Act.

The times Republicans complained about transparency in health care talks

He’s not the only one to pick up on the apparent hypocrisy. Opponents and reporters have enjoyed a field day digging up old tweets and remarks by Republicans, who back in 2009 and 2010 groused at length over the Obamacare process for an alleged lack of transparency. And yet, by almost any measure, this GOP majority has dedicated less time and shared fewer details about their replacement plans.

But even as those Republicans outside the working group of 13 voice their concerns, often in the local or regional newspapers and media focused on their constituents, none have foreclosed on the option of supporting the bill.

McConnell would need just 50 of his 52-member caucus to vote in favor, a split that would call for Vice President Mike Pence to step in and break the deadlock. So he can withstand a pair of defections – perhaps strategically chosen to protect vulnerable seats.

If the Senate bill, which is expected to make its debut later this week, proves to be as unpopular as the House version, which Trump has since labeled “mean,” more than a few Republicans will be looking for cover in 2018 ahead of the midterm elections, and beyond.

The officials making headlines today, trumpeting their distance and frustration with the process might well be thinking less about next week, and this bill, than those coming campaign cycles.