Some 75 artifacts, including a bust of Hitler, were found in a secret room

Behind a bookshelf and through a hidden door in a Buenos Aires, Argentina, suburb, police have discovered a dusty, secret room holding a massive trove of Nazi-era artifacts.

Among the 75 items in this personal museum are framed handguns with the Nazi insignia, daggers, war medals, trophies and a large embossed bust of Adolf Hitler.

An investigation into art trafficking led police earlier this month to what the country’s Security Minister, Patricia Bullrich, called the “largest apprehension of archeological and Nazi pieces of our history.” 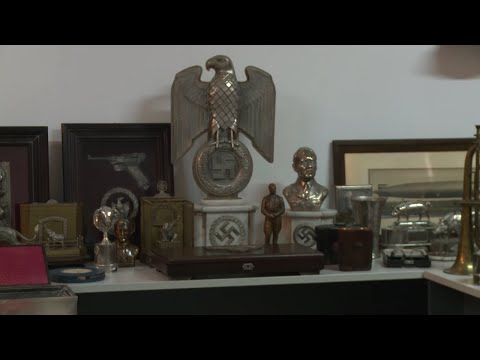 A police video of the seizure, released Monday, shows officers enter a small room, push a large bookshelf out of the way and pass through a secret door – where the artifacts were kept from human touch.

“We found the objects in glass casings in a room, absolutely inaccessible to anyone,” said Marcelo El Haibe, Inspector Commissary with the Cultural Heritage Protection of Argentina’s Federal Police in a statement.

Police show a bust relief portrait of Adolf Hitler at the Interpol headquarters in Buenos Aires on June 16.
Natacha Pisarenko/AP

Some of the artifacts were still in their original cases, such as a set of harmonicas and children’s building blocks.

Authorities are not releasing details about where the seizure happened or the identity of the presumed owner. Nor did they reveal how they learned of the artifacts’ whereabouts. But they did say three different addresses were raided.

A member of the federal police shows a box containing harmonicas.
Natacha Pisarenko/AP

Other objects included folding rulers and compasses with accompanying graphs and tables in velvet cases. A Nazi medical device used to measure the size of the human skull – perhaps used in medical procedures on Holocaust victims – also was found.

Alberto Indij of the Argentinian Israelite Association had an emotional response to the find.

“We know their history, the terrible experiments of (doctors such as) Josef Mengele,” he said. “When I see these objects, I reproach this terrible era for humanity.”

Many mummified animals and Chinese art pieces also were found. Authorities say the pieces were likely destined for the black market.