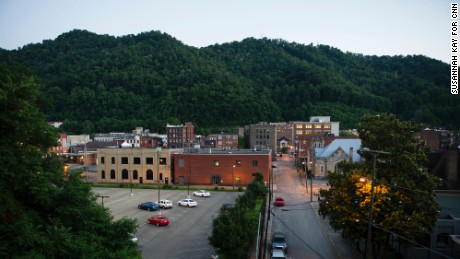 Dusk falls on the town of Logan, West Virginia, in the southern coalfields region of the state.

What's the future of coal country? These grads aren't sure

(CNN)Straddling US Route 52 as it winds through the mountains of southern West Virginia, Iaeger is a town of just 350 residents.

For most of his life, Cody DeLong has been one of them.
"McDowell County is the hometown that you see in all those high school football movies," said DeLong, 22. "It's two-lane roads. ... We have one stoplight in the whole county. And the people are the greatest people you'll ever meet in your life."
A graduate of Concord University, DeLong said McDowell County was an excellent place to grow up.
But as he prepares to head to pharmacy school in the fall, he's not sure whether the home that shaped him -- and gave him his love for hunting and fishing -- will be a part of his future.
Read More
The state, and this region in particular, has been hit particularly hard -- from diminished demand for coal, long the economic bedrock of the region, to the opioid crisis gripping many rural towns.
Most problematic for McDowell County's future: People are leaving and not coming back.
The New River Gorge Bridge in Fayetteville, West Virginia, is the third-longest single span arch bridge in the world, and a popular tourist attraction in the southern part of the state.
The loss of coal mining jobs has accelerated in recent years. In the fourth quarter of 2011, coal employed 26,000 West Virginians. By the second quarter of 2016, that number had plummeted to just 12,000.
In 1950, McDowell County had nearly 100,000 residents, many of whom worked in the area's coal mines. Today, McDowell is one of the poorest counties in the country, with median household income under $25,000 and just over 20,000 people in the county.
West Virginia high school grads go to college at a lower rate than their American peers, with 55% enrollment, compared to 64% nationally.
With the future of southern West Virginia uncertain, we asked recent graduates from the region: Do they plan to stay in West Virginia to build a life and career, or do they feel the need to get out to succeed?
All the students we spoke with will enroll in college or have already graduated. Here's what six of them said about their futures -- and that of their home.

From the coalfields to Cambridge

Grace Bannister, 17
This fall, Logan County's Grace Bannister is heading to a place worlds away from where she grew up: Harvard University.
"I think there's a very large gap in the quality of life between where I'm from and where I'm going," she said.
Grace Bannister shows off her graduation cap in her backyard in Chapmanville, West Virginia. Bannister graduated this year as valedictorian of her class and plans to attend Harvard University in the fall.
Bannister has lost family members to drug overdoses and seen her father's mining supply company weather tough times to stay in business. She's concerned about the future of her home.
"I almost feel like it'll become like a ghost town because most of the population at this point is older," she said.
At Harvard, Bannister plans to major in government or anthropology. Unlike some other recent graduates we spoke to, Bannister wants to be a part of the change she says her home needs.
Grace Bannister joins friends before the start of "Hairspray" at Chief Logan State Park in Logan, West Virginia. "A lot of what you hear about this place is the negative, but we have so many positives," she said. "We have such a rich culture and feeling of community in this area, because when you grow up in a place of hardship, it really bonds a group of people together."
"I hope to someday come back and either try to make a difference working in the legal sector to help people get their lives on track, or I'd really like to someday run for public office -- maybe Senate or governor to try to help on a national level."

'They just want to jump on the bandwagon to make fun'

Cody DeLong, 22
His father, brother, uncles and several cousins have worked in southern West Virginia's coal mines, but Cody DeLong plans to take a different path.
This fall, DeLong will begin his first year at Marshall University's School of Pharmacy. When he finishes school, he doesn't think he'll return home but he plans to settle somewhere in rural Appalachia.
A view of the Superior Processing Inc. coal mine in McDowell County, West Virginia.
Growing up in McDowell County and witnessing the toll that drug abuse took on many families led him to discover his life's calling.
"There are a lot of doctors and pharmacists that -- you can't really blame it all on them -- but they really contribute to the big epidemic of opioid abuse that we have."
He doesn't deny the problems facing McDowell County -- "The facts are the facts" -- but is critical of how the mainstream media has covered his home.
"They don't really find any of the success stories," he said. "They just want to jump on the bandwagon to make fun."

'We basically had to start over from nothing'

Joseph Hayes, 17
In 2001, as deadly floods swept through McDowell County, Joseph Hayes' mother fetched him from day care in a panic before meeting his father and fleeing to higher ground.
By the time the waters subsided, the family's home, dogs and nearly everything they owned was gone.
Joseph Hayes, 17, sits in his bedroom in Premier, West Virginia. Hayes has felt supported growing up black in a predominantly white community in McDowell County. "People here really don't see color."
"We basically had to start over from nothing," Hayes said.
With FEMA's assista