All eyes were on Attorney General Jeff Sessions on Tuesday as he testified before the Senate intelligence committee less than a week after ousted FBI Director James Comey’s testimony.

Lawmakers grilled Sessions about his role in Comey’s firing, his own involvement in the Trump campaign and his meetings with Sergey Kislyak, the Russian ambassador to the US.

The official fired back at lawmakers over claims that he colluded with Russian officials during the 2016 election, calling it an “appalling and detestable lie.”

Here’s a look at the top quotes from Sessions’ hearing.

1. “This venue is your opportunity to separate fact from fiction” – Sen. Richard Burr, committee chairman to Sessions before his opening testimony.

2. “He asked me a rambling question” – Sessions throwing shade at Sen. Al Franken. In January, during his confirmation hearing, Sessions told the Minnesota Democrat that he “did not have communications with the Russians.” However, in his opening remarks Tuesday, Sessions said he did not disclose two meetings with Kislyak because he was responding to Franken’s “rambling question.”

He added: “Sen. Franken asked me a rambling question, after some six hours of testimony, that included dramatic, new allegations that the United States intelligence community has advised President-elect (Donald) Trump that there was continuing exchange of information during the campaign between Trump’s surrogates and intermediaries for the Russian government.”

Jeff Sessions: "I did not have communications with the Russians." (C-SPAN) 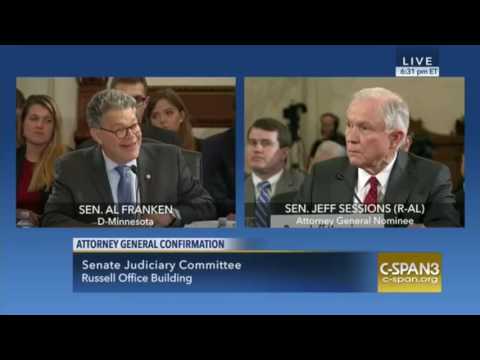 3. “That answer, in my view, doesn’t pass the smell test.” – Sen. Ron Wyden to Sessions. The Oregon Democrat was questioning Sessions about why he could sign the letter recommending the firing of Comey if it violated his recusal. Sessions said: “It did not violate my recusal.”

The exchange became more heated, with Sessions later telling Wyden: “I am not stonewalling. I am following the historic policies of the Department of Justice.”

4. “This is a secret innuendo being leaked out there about me – and I don’t appreciate it” – Sessions to Wyden. He was being asked about Comey’s testimony.

“Mr. Comey said that there were matters with respect to the recusal that were problematic and he couldn’t talk about them. What are they?” Wyden had asked.

5. “You are obstructing that Congressional investigation by not answering questions” – Sen. Martin Heinrich, who took issue with Sessions declining to answer questions. Sessions told the committee he is protecting Trump’s right to later on assert executive privilege “if he chooses.”

6. “Do you like spy fiction? Do you like Jason Bourne or James Bond movies?” – Sen. Tom Cotton. The Arkansas Republican seemingly mocked allegations that Session colluded with Russians.

He went on to say: “Have you ever, ever in any of these fantastical situations heard of a plotline so ridiculous that a sitting United States senator and an ambassador of a foreign government colluded at an open setting with hundreds of other people to pull off the greatest caper in the history of espionage?”

“Thank you for saying that, Sen. Cotton,” he said. “It’s just like ‘Through the Looking Glass.’ I mean, what is this?”

7. “I’m not able to be rushed this fast, it makes me nervous” – Sessions to Sen. Kamala Harris, who was interrupted while questioning the attorney general.

8. “I don’t recall”– Sessions multiple times throughout the hearing.