McCain on Kushner backchannel reports: ‘I don’t like it’

"I mean, this becomes more and more bizarre. In fact, you can't make it up," McCain said

Arizona Sen. John McCain is not pleased about reports that Jared Kushner proposed setting up a secret communications channel between the Trump transition team and the Kremlin.

“I don’t like it,” the Republican lawmaker said Monday in an interview with the Australian Broadcasting Corporation’s “7:30” when asked about President Donald Trump’s son-in-law’s possible ties to Russia.

“I know that some administration officials are saying ‘well, that’s standard procedure.’ I don’t think it’s standard procedure prior to the inauguration of the president of the United States by someone who is not in an appointed position. And I think that (former FBI Director James) Comey we now know took action that he did in regards to then-candidate (Hillary) Clinton because of some false news that was being put out by the Russians. I mean, this becomes more and more bizarre. In fact, you can’t make it up.” 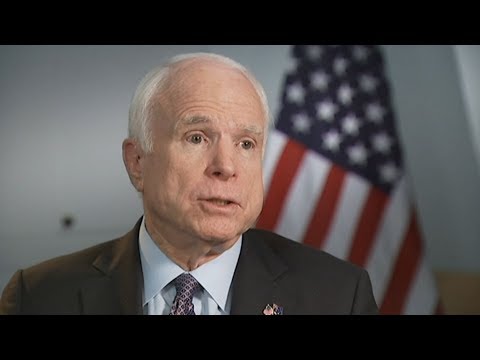 McCain’s comments come two days after news broke that Kushner, a trusted aide to President Donald Trump and husband to Ivanka Trump, chatted with Russia’s ambassador to the US Sergey Kislyak at Trump Tower in December about the proposed channel. A source told CNN the channel was meant to discuss military operations in Syria and other matters.

“I think ISIS can do terrible things,” McCain said. “But it’s the Russians who tried to destroy the fundamental of democracy and that is to change the outcome of an American election.”

McCain said the Russians “tried, and are still trying” to affect the outcome of elections – most recently with their interference in the French election. He also called for sanctions on Russia.

“We have done nothing since the election last November to respond to Vladimir Putin’s attempt to change the outcome of our elections,” he said. “So, way to go Vladimir. We haven’t responded at all … Hopefully, when we get back from recess the Senate will enact sanctions on Russia.”

This is not the first time McCain has been vocal about the Trump administration’s relationship with Russia.

Last week, the Arizona lawmaker said investigations into allegations of ties between Trump’s campaign and Russia were reaching “Watergate size and scale.”

“With the appointment of (former FBI director) Mr.(Robert) Mueller, we’ve now hit that stage of a scandal,” McCain said on on “Fox News Sunday. “And now, the question is, how is this handled?”