When Poafpybitty and her husband, Virgil, decided to return to Pine Ridge after 15 years living off the reservation, they were not just choosing a life on the reservation over life on what some refer to as “the outside.”

It also meant her return to the home Poafpybitty grew up in, a house abandoned after the death of her parents. Her brother murdered them there while Poafpybitty’s young son looked on.

“I knew moving home was going to be a struggle,” she said in a recent interview. “I didn’t care.”

A road leading out of the Pine Ridge Indian Reservation in South Dakota.
Jeff Simon/CNN

The challenges facing residents of Pine Ridge, one of the poorest parts of the country, are chronic and mounting. About 40,000 members of the Oglala Sioux tribe live here on this vast expanse of land that is roughly the size of Connecticut. Poverty and unemployment rates remain seismic, alcoholism is rampant and the life expectancy here is the shortest in the country, according to a recent study published in the journal JAMA Internal Medicine.

Nearly everyone we spoke to over a recent trip to Pine Ridge had a story that put a fine point on the hard business of living. A man who cared for a young relative who suffers from fetal alcohol syndrome; a woman who had been held at gunpoint by her daughter’s then-boyfriend, addicted to drugs; a woman who’d found her brother dead hours before we met her, still too shaken up to talk.

Virgil Poafpybitty inside of his home on the Pine Ridge Indian Reservation in South Dakota.
Jeff Simon/CNN

“Coming back here, you learn to just live day to day,” Virgil Poafpybitty said. “You can’t think about the future.”

The future at Pine Ridge could soon grow bleaker. The budget that President Donald Trump unveiled on Tuesday makes deep cuts to a slew of areas that life at the reservation depends on. The spending reductions touch every part of life from access to clean drinking water to block grants that fund programs to feed the elderly to much-needed after-school programs. In one of the nation’s most deeply impoverished communities, residents and tribal leaders say the cuts could be devastating.

Wishing away the inevitable

Campaign slogans and political promises ring hollow here on the Pine Ridge reservation, in part because residents say they’ve seen it all before. In 1999, then-President Bill Clinton visited this sprawling, more than 3,000-square-mile reservation as part of his so-called poverty tour of economically depressed communities across the country. 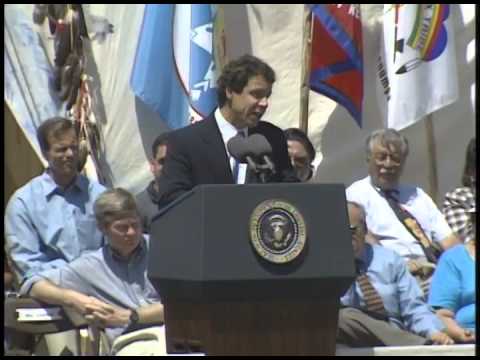 Clinton announced an economic empowerment zone to help boost Pine Ridge’s economy. He railed against an unemployment rate that was 15 times the national rate and Native communities replete with deadly disease and soaring rates of infant mortality, telling Pine Ridge’s residents that “when these things persist, we cannot rest until we do better.”

“It’s like time just stood still,” Virgil Poafpbitty said. “All the same buildings, all the same stores. It doesn’t matter what government gets in there. We’re still poor.”

The sweeping cuts included in the Trump budget proposal have sent shivers through this community. The cuts could be devastating, according to Mason Big Crow, the Oglala Sioux tribe treasurer.

The tribe could lose at least half the money it receives from federal sources, Big Crow said in an email in response to questions about the President’s budget blueprint. But tribal leaders were already meeting and discussing the impact on future years’ budgets.

Trump’s plan would slash the budget for the Interior Department – which includes the Bureau of Indian Affairs, the federal agency that provides services for nearly 2 million American Indians and Alaska Natives – by 12%, to $11.6 billion.

The money the Oglala Sioux tribe receives from the agency supports critical services and programs, including the already-strained tribal police. Just 44 police officers currently serve the sprawling reservation. Cuts could mean having to do more with less. The number of homicides on the Pine Ridge reservation doubled in 2016 to 17 from 9 in the previous year. Several residents said they’d called reservation police – and no one answered the calls.

Members of the Oglala Sioux tribe, which heavily relies on federal financing to operate, say it’s imperative that the administration continue its support.

“It is the United States’ responsibility to uphold their obligation, but this is not happening,” Big Crow said.

Trump administration officials and representatives of the Bureau on Indian Affairs did not respond to requests for comment.

Similar stories are playing out on reservations across the country that all depend on US federal government support. Five of the poorest 10 counties in the United States are in Indian country, according to Jacqueline Pata, the executive director of the National Congress on American Indians.

“Pine Ridge is the same as many communities who have similar concerns,” she said. “Those that are the most vulnerable in these communities, when their resources are cut, they have very little safety net in place.”

Robert Brave Heart Sr., the executive vice president of Red Cloud Indian School, said the Trump administration’s plan to eliminate $1.2 billion in grants for after-school and summer programs could devastate this community’s youth. Several years ago, a string of suicides among young people on the reservation was so pervasive that it drew national attention and sparked congressional inquiries.

“I just can’t help but think that this would impact all of our students,” Brave Heart said.

The after-school programs at Red Cloud, he said, provide a safe haven for children, one that could help keep them from becoming involved with the gangs that roam the reservations and away from drugs, alcohol and violent situations.

The school also relies on Americorps volunteers whose tasks range from teaching classes to driving school buses full of students back and forth each day. But cuts to the Corporation for National and Community Service, which funds Americorps, are also on the table. That means Red Cloud Indian School would have to stretch to get kids in classrooms and teachers to educate them.

“We’re not sure how we’re going to deal with it until we get there, if we get there,” Brave Heart said. “Hopefully we won’t.”

While there’s a sense of weariness at yet another round of budget cuts from the federal government that could rock this reservation, most people seem detached from it and skeptical that any US politician could change their lives.

Chris Cuny, 49, is working to tackle the housing crisis on Pine Ridge. He, like most on the reservation, didn’t support Trump.

Chris Cuny outside of his home on the Pine Ridge Indian Reservation in South Dakota.
Jeff Simon/CNN

“We’ve seen a lot of campaign slogans, and it always seems that we are the last to really get any of the effects when those changes come,” Cuny said. “If Donald Trump is making America great again, his administration will really need to look into the reservation communities.”

Doing the best they can

Doreen Two Bulls has been fighting for what feels like her entire life. Fighting to keep her daughters safe, off drugs and in schools. Fighting to make sure her grandchildren grow up in a stable home. Fighting just to keep her lights on and her house warm.

Eight years ago, she moved back to Pine Ridge from Rapid City, relocating into her grandparents’ old house a few miles outside the village of Pine Ridge. Her two-bedroom house is packed with people yearning for space. Two daughters, one son and five grandchildren all live there.

“Usually there are mattresses everywhere,” she said on a recent Thursday as she walked through the house, urging an adult daughter to wipe down mirrors smudged with child-sized handprints and years of wear. “We manage, we get by,” she said a few minutes later with a weak smile.

Was the decision to leave Rapid City the right one? Two Bulls has her doubts. As we talked, her 4-year-old grandson crawled over the arm of a couch, begging for attention. Behind the couch, one of her daughters cared for her 9-month-old son, perched on the edge of a set of metal bunk beds.

“I really wish we could have stayed, at least three more years, to get my kids into school a little more,” she said. When she moved back to Pine Ridge, her eldest daughter was a sophomore in high school. Life changed quickly. Sometimes, she’d spend her nights looking for her daughter on the dusty streets of the village.

Now her daughter lives in Rapid City and had just started a training program to get a new job while Two Bulls holds things together and cares for her grandchildren back in Pine Ridge. It’s been lonely work – the father of three of her daughters died from a drug overdose. She’s now engaged, but her fiance splits his time between the reservation and working on the outside.

She’s tried to be persistent, but sometimes the reservation’s problems seem too big to overcome and leaving feels like the only viable choice.

“I would like for my daughters to go off of the reservation, to get the employment going and get the feeling of being able to live in society out there,” Two Bulls said. “That choice is really up to them if they want to come back.”

Antoinette Poafpybitty outside of her home on the Pine Ridge Indian Reservation in South Dakota.
Jeff Simon/CNN

For the Poafpybittys, though, coming back to the reservation wasn’t a choice. It was a calling. They wanted to live near family, to reconnect with the land where they grew up, to celebrate their heritage.

“I have the opportunity to go to sweats, our ceremonies, to go to our sun dances,” Antoinette said. “When we lived away from home, I would have to plan all year to save the money, and then it would to come to getting, asking my boss to take the leave, and sometimes I would get denied to have the opportunity to come home. And being home … I can’t beat that.”

At first they slept in their car as they began to shear away the overgrown foliage that took over the house in the more than a decade since Antoinette’s parents’ deaths. Then they began to replace broken windows, finally giving them a place to call home again. A double-wide window hangs where the front door first did.

Big wooden patio chairs that Virgil made sit in the front lawn. Matthew, Antoinette’s adult son, tends a garden out front; they plan to name it for Antoinette’s late mother. A sign in the garden declares: “Do not enter. Sacred ground.”

“It’s the best therapy I could get,” Antoinette said. “Coming home to my parents’ house. It’s that security, feeling safe and being at home.”