The bloody brawl this week on Washington, DC’s Embassy Row is not the first time members of Turkish president Recep Tayyip Erdogan’s entourage have been filmed fighting in public.

A little more than a year ago in the same city, journalists accused members of Erdogan’s security detail of man-handling them and cursing them at a speech the Turkish president gave at the Brookings Institution, a Washington think tank.

Outside the event on March 31, 2016, DC police had to intervene to separate Erdogan supporters and protesters in what police described as a “skirmish involving demonstrators.”

Erdogan referred to the protests as he addressed the audience inside: “They are shouting, but they don’t know what’s going on back in Turkey. The freedom of expression has been regulated within the clauses of the Turkish constitution … They are pretending that I have illegitimacy.”

Meanwhile Brookings staff had to step in to protect a credentialed journalist from being evicted from the venue by Turkish security. Another journalist, Woodrow Wilson fellow Amberin Zaman, accused a Turkish security guard of calling her “a whore.”

An aide to Turkish Prime Minister Recep Tayyip Erdogan kicks a person who is being wrestled to the ground by two police officers during protests in Manisa, Turkey, on Wednesday, May 14.
Depo Photos/EPA/Landov

In May 2014, after the deadliest industrial accident in Turkish history, a top aide to Erdogan was photographed kicking a protester who was being held down by armed officers dressed in camouflage uniforms.

The incident took place in the mining town of Soma, a day after a devastating coal mine fire killed nearly 300 people as Prime Minister Erdogan visisted the town.

The image outraged many in Turkey, prompting an outpouring of anger on social media.

The aide, identified as Yusuf Yerkel by Turkish media and CNN Turk, reportedly said he was deeply saddened by the events.

“I am sad that I could not keep my calm in the face of all the provocation, insults, and attacks that I was subjected to that day,” he said, according to Turkey’s semi-official Anadolu news agency.

In September 2011, a brawl erupted between members of then Prime Minister Erdogan’s security detail and United Nations security officers in the halls of the United Nations General Assembly in New York.

A UN guard was reportedly taken to hospital with an injury after the incident.

Several days later, a spokesman for the UN Secretary General issued a statement about “some unfortunate misunderstandings involving security between UN uniformed officials and security officials of member delegations.”

A UN spokesman went on to tell journalists the issue had been resolved, and “necessary action has also been taken to prevent such misunderstandings in the future. 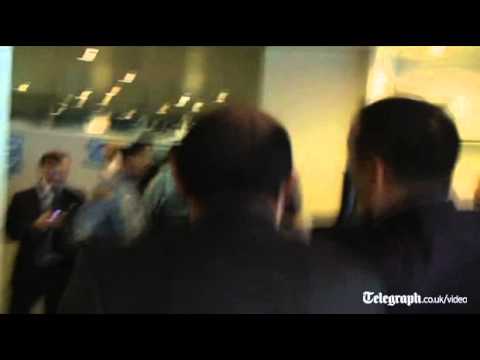 After this week’s assault by Turkish security officials against protesters in front of the Turkish ambassador’s residence in Washington, the US State Department said it was “communicating our concern to the Turkish government in the strongest possible terms.”

A statement from the Turkish embassy argued “Turkish-Americans responded in self-defense.”

Critics argue the violence illustrates the much broader pattern of human rights abuses in Turkey.

“Clearly Erdogan’s guards feel complete impunity, drawing on tools of repression they use at home & knowing he has their back, no matter what,” wrote former US ambassador to the UN Samantha Power on Twitter.

Clearly Erdogan's guards feel complete impunity, drawing on tools of repression they use at home & knowing he has their back,no matter what https://t.co/jq1tFHwv35

In the 15 years that Erdogan has served as prime minister and president of Turkey, there has been a broad trend to crack down on freedom of the press and expressions of public dissent.

Turkey is frequently ranked as the world’s top jailer of journalists, according to the Committee to Protect Journalists.

Why Trump is cozying up to strongman leaders