The actor and Colbert performed a sketch called “Big Questions with Even Bigger Stars,” while pretending to be on a picnic, lying on a blanket. The skit marked a rare TV appearance for Pitt since he and Angelina Jolie announced they were divorcing last year.

“I haven’t been out in a while. It feels good, feels good,” Pitt said.

The two got deep as they lobbed questions back and forth about the meaning of life, setting each other up for jokes.

“If the universe includes all of existence, what existed before the universe?” Pitt asked. Colbert’s responded, “Probably a teaser trailer for the universe with, like, one really good scene that isn’t even in the universe when it’s released.” 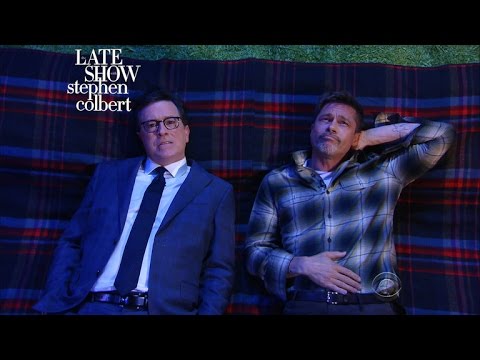 Colbert jokingly rated Pitt a “solid eight” out of 10 in the looks department.

Pitt couldn’t help but laugh and responded, “You’re sweet. Thanks, thanks.”

Related: Brad Pitt opens up about his family being ‘ripped apart’

Earlier this month, Pitt spoke candidly about his split with Jolie and co-parenting their six children in an interview with GQ.

“We’ve been able to work together to sort this out,” he said. “We’re both doing our best.”